Article 2: "Positive Punishment: What It Is, Benefits, and Examples" 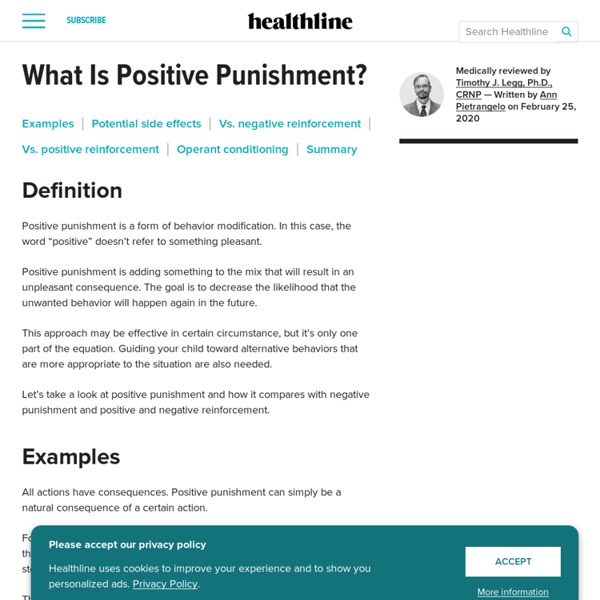 Positive punishment is a form of behavior modification. In this case, the word “positive” doesn’t refer to something pleasant. Positive punishment is adding something to the mix that will result in an unpleasant consequence. The goal is to decrease the likelihood that the unwanted behavior will happen again in the future. This approach may be effective in certain circumstance, but it’s only one part of the equation. Guiding your child toward alternative behaviors that are more appropriate to the situation are also needed. Let’s take a look at positive punishment and how it compares with negative punishment and positive and negative reinforcement. All actions have consequences. For example, if your child eats whipped cream that has spoiled because they hid it under their bed, they’ll get a stomachache. These experiences are unpleasant at best. When choosing a punishment, think about punishing the behavior, not the child. Scolding. Punishment is used to discourage a certain behavior.

Article 2: ''Parenting A Teen Through Positive Reinforcement - Back On Track" Most parents can agree: the teenage years can be rough! Hormones are raging, they are trying to gain more independence, and they spend a lot of time away from their parents and their home while hanging with friends. One minute they love and adore you, the next minute you ruined their life. Can many of you relate? When tempers flare and disagreements are happening, it’s hard to not resort to yelling and harsh discipline, but studies are showing us that positive reinforcement may be the key to success, not just in the home but also in their school life.

How reinforcement and punishment, when misued by parents can lead to Parent Child Coercive Cycle The information provided in this section is intended for clients as an adjunct to their treatment at Psychological Services of Pendleton, LLC. It may also provide useful information to the general public, but it should not be considered a substitute for psychotherapy with a psychologist or other qualified mental health professional. The Parent Child Coercive Cycle Download as PDF Terrel L. Templeman, Ph.D. 5 Activities For Using Positive Reinforcement in the Classroom It wasn’t too long ago that school-rooms were places of stern words and plentiful discipline. It was commonplace for teachers to favor harsh punishment over positive punishment, including using the cane. Now, however, it is recognized that there are more effective ways to teach and to manage classrooms. Techniques such as positive reinforcement. Positive reinforcement was introduced by B.F.

Positive Punishment Positive punishment is the practice of adding a punishment and can be contrasted to negative punishment, which is the process of taking away something pleasant. Timeouts and extra chores are examples of positive punishment. Although spanking may be a form of discipline, the American Academy of Pediatrics advises against spanking children. Positive punishment can be an effective component of a parent's disciplinary repertoire. Article 1: "Positive Reinforcement for Adolescents" By the time children have reached adolescence, their responses are often ingrained, but parental actions can still positively affect adolescent behavior. Since adolescents are struggling to develop their personal identity and are concerned about their body image, parental support is crucial to help positively frame experiences as learning opportunities. Positive reinforcement remains a powerful teaching tool during these formative years, and we encourage parents to take time to contemplate the ways they can help adolescents mature and become self-reliant. Reinforce mature decisions by allowing increased privileges when adolescent demonstrates increased responsibility.

Positive Punishment: What Is It And How It Works? - MomJunction Positive punishment! Sounds like a perfect oxymoron. But how can a punishment be positive? How can you even enforce such a punishment? Is it effective? How Negative Reinforcement is a Good Tool for Parenting Yet Often Misused Did you know that parents could train their children to act defiant? “Who in their right minds would do that?” you may wonder. Well, many of us actually do. Find out how a lot of parents unknowingly train their children in rebellion using negative reinforcement.

The Difference between Positive/Negative Reinforcement and Positive/Negative Punishment February 5, 2013 7:40 pm Published by Kelley Prince M.A., BCBA In Applied Behavior Analysis, there are two types of reinforcement and punishment: positive and negative. It can be difficult to distinguish between the four of these. Therefore, the purpose of this blog is to explain the differences in order to help parents and professionals develop appropriate interventions to improve behavior. Reinforcement Negative Reinforcement: What Is It and How Does It Work? What is negative reinforcement? Negative reinforcement is a method that can be used to help teach specific behaviors. With negative reinforcement, something uncomfortable or otherwise unpleasant is taken away in response to a stimulus. Over time, the target behavior should increase with the expectation that the unpleasant thing will be taken away. Read on to learn more about this type of learning. The relationship between behavior and consequences is part of a type of learning called operant conditioning.

Article 1: "What Is Reinforcement in Operant Conditioning?" One of the many different ways in which people can learn is through a process known as operant conditioning (also known as instrumental conditioning).1 This involves learning through reinforcement or punishment. The type of reinforcement used can play an important role in how quickly a behavior is learned and the overall strength of the resulting response. Understanding Reinforcement

Using Positive Reinforcement to Improve Behavior When your child misbehaves, rewards might be the last thing on your mind. But, positive reinforcement can be one of the most effective behavior modification techniques.1 You can use positive reinforcement to encourage prosocial behaviors, like sharing or following directions. And, you can use it to prevent misbehavior, like hitting and rule violations. Positive reinforcement can also be an effective way to encourage and motivate your child to be responsible, do their chores, get along with their siblings, or complete their homework assignments without arguing. How Positive Reinforcement Works Why you should reward teens instead of punishing them Adolescents focus most on rewards and are less able to consider the consequences of alternative actions or learn to avoid punishments, a new study has shown. The study, conducted by University College London, showed that adolescents learned best when they were rewarded. Adolescents were less good at avoiding punishments than their adult counterparts. Adults also performed significantly better when they were told how different choices would lead to a better outcome, while teenagers didn’t seem to take that into account.