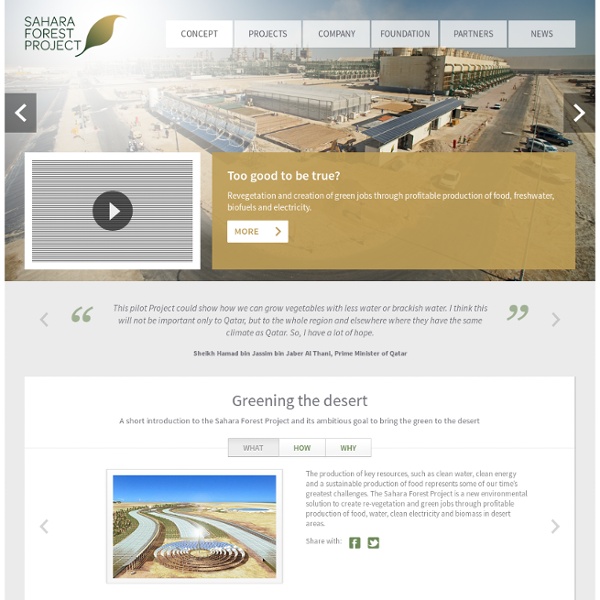 Seawater Greenhouse A seawater greenhouse is a greenhouse structure that enables the growth of crops in arid regions, using seawater and solar energy. The technique involves pumping seawater (or allowing it to gravitate if below sea level) to an arid location and then subjecting it to two processes: first, it is used to humidify and cool the air, and second, it is evaporated by solar heating and distilled to produce fresh water. Finally, the remaining humidified air is expelled from the greenhouse and used to improve growing conditions for outdoor plants. The technology was introduced by British inventor Charlie Paton in the early 1990s and is being developed by his UK company Seawater Greenhouse Ltd. The more concentrated salt water may either be further evaporated for the production of salt and other elements, or discharged back to the sea. The seawater greenhouse is a response to the global water crisis and peak water. History[edit] Process[edit] Applicability[edit] Other benefits[edit] Locations[edit]

Speed Camera Lottery puts fun in sustainability and green marketing Last week was an eyeopener for me. I attended the Sustainable Brands 2011 Conference in Monterey, CA, and like I tweeted from the event: It is the TED of sustainability. Many of the top brands and ad agencies in sustainability and green marketing presented alongside individual innovators and disruptive thinkers. Each was available for one-on-one discussions following plenaries and workshops, and each gladly shared their story about transformative innovation, especially as it relates to cause and green marketing. Kevin Richardson had a particularly intriguing story, and one that for me reflected the spirit of SB11. Kevin used the same approach to storytelling he relies on as a senior producer for MTV’s Nickelodeon Kids & Family Games to create “Speed Camera Lottery.” “Each of us is the protagonist in our own life. It’s a real-time game that captures snapshots of all passing license plates and drivers. A fun way to change behavior

Meet Jordan's New Greenhouse-Power Plant Hybrid A novel combination of technologies that has the potential to turn large areas of desert green, producing commercial quantities of food and energy crops, fresh water, and electricity, looks set to have its first large-scale demonstration in Jordan. The governments of Jordan and Norway today inked an agreement to work with the Sahara Forest Project (SFP), an environmental technology group based in Norway, to build a 20-hectare demonstration center near Aqaba on the Red Sea, which would begin operation in 2015. "It's a holistic approach that could be of major interest to a large number of countries," says Petter Ølberg, Norway's ambassador to Jordan. The key to the project is bringing seawater to the desert and evaporating it. SFP combines this technology with a concentrated solar power plant. Under today's agreement, Jordan will provide the 20-hectare site and a corridor to pipe salt water from the Red Sea. Read more in the 14 January issue of Science.

Seawater Farming | Mission 2014: Feeding the World Problem Seawater farming addresses the severe lack of freshwater and undesirable soil conditions for agricultural activities in coastal regions. Saltwater, instead of freshwater, can be used to directly support a wide range of sustainable agricultural activities and enrich the soils in the coastal regions. Freshwater, which is defined by having much lower salts and ions concentration than seawater and brackish water, only composes about 2.75% out of all water on Earth, and 74.5% of all freshwater are contained in the glaciers, which are not readily available for consumption. While many projects have demonstrated the viability of seawater farming in specific locations, little researches have been done to study seawater farming in a wide variety of conditions. Existing pilot projects are running independently in Eritrea (Seawater Forest Initiative), Mexico (Seawater Foundation, Bahia Kino), the United Arab Emigrate (UAE University) and Australia (Seawater Green House). Implementation

Researchers explore ways to use sea water for farming Al Ain: Sea water is being used in farming research to water crops that tolerate, and even need salt to thrive. If successful, farms along the coastline whose fresh water wells dried up long ago could pick up again giving depleted aquifers time to recharge. Salt-tolerant grass, called halophytes, produced for golf courses or forage for cattle and camels, are the focus of modern farming techniques being developed by the Faculty of Food and Agriculture at UAE University in Al Ain to save water. Environmental economists have highlighted that while domestic agriculture is a serious drain on freshwater water tables in the UAE, arable land is limited and future farming expansion has no potential. According to the Gulf Research Centre agriculture in the UAE accounts for only 2.8 per cent of gross domestic product (GDP), but consumes about 80 per cent of underground water reserves. In Abu Dhabi, the government recently launched a scheme to pump desalinated seawater underground.