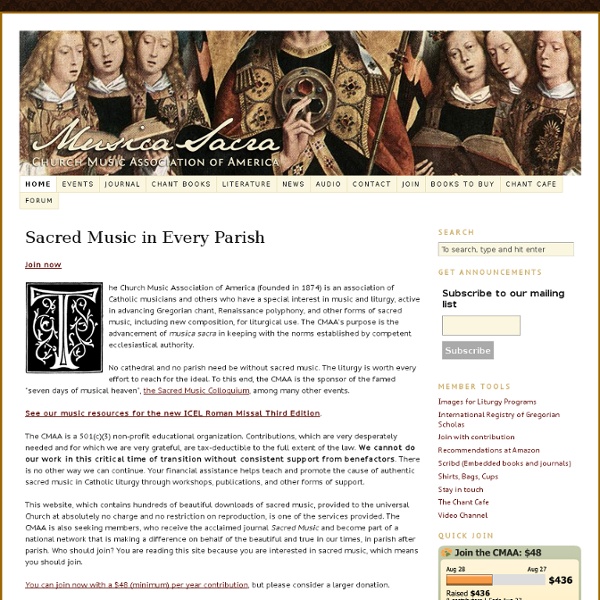 National Association of Pastoral Musicians Catholic Artists Directory Fra Angelico Institute for the Sacred Arts | The mission of The Fra Angelico Institute is to deepen the prayer life of its participants by evangelizing the truth, goodness, and beauty of God through the understanding and creation of sacred art. Daniel Mitsui Art In my religious drawings, I attempt to be faithful to the instructions of the Second Nicene Council, which stated that the composition of religious imagery is not left to the initiative of artists, but is formed upon principles laid down by the Catholic Church and by religious tradition.... The execution alone belongs to the painter, the selection and arrangement of subject belongs to the Fathers. In Gothic art, the iconographic tradition that stretches back to the apostolic age was expressed with extraordinary vigor, fidelity and theological sophistication. Another strong interest of mine is the Northumbro-Irish art of the 6-9th centuries, with its lacertine animals, intricate knotwork and rune-like calligraphy. One of my most prestigious projects was completed in 2011, when the Vatican commissioned me to illustrate a new edition of the Roman Pontifical. Drawings and prints may be purchased using the buttons below. LETTERPRESS BROADSIDES from MILLEFLEUR PRESS

Behold, the Ancient Christian Art of the Roman Catacombs The ancient Romans traditionally cremated their dead. Christians, on the other hand, have traditionally buried their dead unburned as a sign of their belief in the coming resurrection of the body. But in the 2nd century A.D., the burial of unburnt remains started to become fashionable for Romans. [See also: Haunting: Get Lost in Rome’s Ancient Christian Catacombs With Google StreetView] [See also: 1,782 Years Old: Inside the Oldest Church in the World] These underground tombs, or catacombs, were most famously used by early Christians for burying their dead, particularly martyrs, and sometimes for celebrating the divine liturgy. Here is an example of an underground passageway of the catacombs: These narrow passageways sometimes open up to large rooms. Amazingly, despite their importance in the life of the early Church, the early Christian catacombs were lost and forgotten for many centuries. Below are 15 examples. Jesus healing the bleeding woman Jesus with his 12 Apostles The Good Shepherd

Free Online Catholic Sacred Music Resources Free Internet Resources for the Catholic Mass Presentation by Jeff Ostrowski • Southeastern Liturgical Music Symposium • 8/25/2012 Don’t feel like reading? No problem! 1. Here is a quick excerpt by Dr. 2. 1963 (Second Vatican Council Sacrosanctum Concilium) — The Church acknowledges Gregorian chant as specially suited to the Roman liturgy: therefore, other things being equal, it should be given first place in liturgical services. 2003 (Pope John Paul II Chirograph on Sacred Music) — With regard to compositions of liturgical music, I make my own the “general rule” that St Pius X formulated in these words: “The more closely a composition for church approaches in its movement, inspiration and savour the Gregorian melodic form, the more sacred and liturgical it becomes; and the more out of harmony it is with that supreme model, the less worthy it is of the temple.” 3. 4. The rest of this presentation contains a whole bunch of resources. 5. 6. 7. “Seeing is believing” when it comes to the St.

New Liturgical Movement: Audio of Archbishop Sample's Talk on Sacred Music Christmas 2015 Photopost - Part 2Gregory DiPippo As always, our thanks to all those who have sent in photographs of their liturgies during the Christmas season, with our best wishes to all our readers for a Merry Christmas and Happy New Year! Our next photopost will be for the Epiphany. (UPDATE: This post has been updated with new submissions from churches in Taiwan, the Philippine Islands, and ... Solemn Mass, Epiphany of the Lord – Hyannis, MAFr. Thomas Kocik The first Solemn Mass (usus antiquior) to be celebrated on Cape Cod, Massachusetts, since the Second Vatican Council will begin at 1:30 pm on Wednesday, January 6th (Feast of the Epiphany), 2016, at Saint Francis Xavier Church, 347 South Street, Hyannis. SFX Hyannis offers the traditional Latin Mass every Sunday and holy day of obligation; eight a... Picture of the YearGregory DiPippo As our last post of the year 2015, I would like to share with our readers this beautiful photograph of a newly-ordained priest with his mother.

GregoBase | A database of gregorian scores New Liturgical Movement: Advent and Christmas Meditation on Art and Scripture Online Resources: A Dominican Gradual from 1722Gregory DiPippo Thanks to Fr Innocent Smith O.P., whose work on the Dominican liturgy we have mentioned here various times, for bringing to my attention a new liturgical resource on Google Books, “Cantus Missarum Totius Anni ad Usum Sacri Ordinis FF (Fratrum) Praedicatorum.” (Chants of the Masses of the Whole Year for the Use of the Sacred Order of Preachers.) Th... Un-censoring the Psalms? Mons. Epiphany Photopost 2017Gregory DiPippo Even though the number of submissions for this photopost is pretty small, it manages to cover all of the many liturgical bases of the Epiphany: the blessings of water, of chalk, the rarely done blessing of gold, frankincense and myrrh (twice) the proclamation of the movable feasts, and even a couple of processions, and the Byzantine Rite. Epiphany in Palo Alto with the St Ann ChoirGregory DiPippo The St.