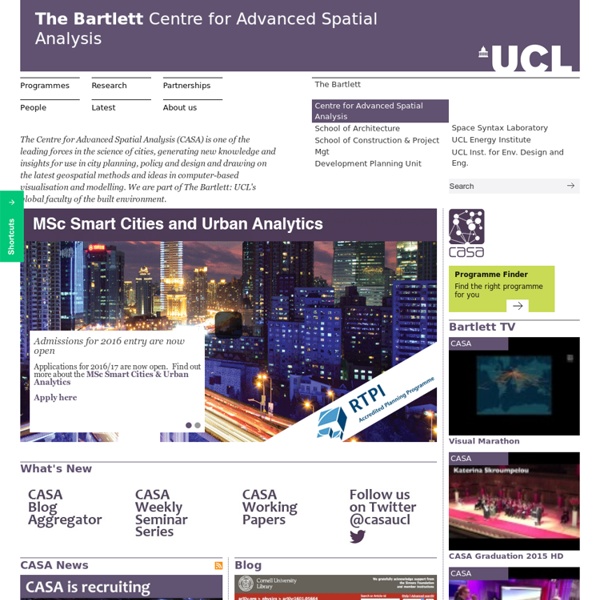 Due to launch September 2015 Exciting changes to our MRes programmes are underway! Our MRes Advanced Spatial Analysis and Visualisation programme is being improved to reflect the data-oriented and research-focussed nature of the course, and with that comes a number of changes, including a new name: MRes Spatial Data Science and Visualisation. Find out more >

Center for Study of Science, Technology and Policy (CSTEP) "To enrich the nation with technology-enabled policy options for equitable growth." International Programs The Technical University of Munich offers an array of courses of studies whose lectures are held partly or completely in English language. Courses in English Master's degrees completely taught in English. Welcome to the webpage of the research program "Megacities - Megachallenge" Megacities - according to various definitions cities with more than 5, 8 or 10 million inhabitants - are particularly important in the global urbanization processes. They are results of globalisation and are subject to global ecological, socio-economic and political change. Reciprocally, they are also determining factors of global change due to their global outreach and high developmental dynamics.

Department of Computer Science: Marta Kwiatkowska Interests My research is concerned with modelling and analysis methods for complex systems, such as those arising in computer networks, electronic devices and biological organisms. The analysis methods that I investigate include simulation and formal verification, with particular emphasis on quantitative verification of probabilistic systems. My work spans the whole spectrum, from theory, through algorithms to software implementation and applications.

South America Conference Extremes of wealth and poverty in São Paulo, as is often cited by this image of the Paraisópolis favela sitting cheek-by-jowl to gated complexes of wealthy Morumbi, only partially capture the city’s deep inequality. One of the most iconic views of contemporary São Paulo, commonly used in international publications dealing with the city, is a picture in Morumbi showing the favela Paraisópolis on one side of a wall and a luxury building with tennis courts and one swimming pool per balcony on the other. However, the scholarly literature on the city and several of its main instruments of urban policy insist on another image: one that contrasts a rich and well-equipped centre with a poor and precarious periphery. MIT-Singapore design center creates free software tool to analyze cities as spatial networks Network analysis — the mathematical analysis of relationships between elements or actors in a complex system — has become popular among transportation planners and spatial analysts, but its use remains relatively limited among architects and urban designers, whose day-to-day work demands more visioning than analysis. Now, researchers at the joint MIT-SUTD International Design Center (IDC) have created a free network analysis plugin for Rhinoceros 3-D modeling software, one of the most popular software platforms among architects and urban designers. The new Urban Network Analysis (UNA) plugin enables urban planners and architects to describe spatial patterns of cities using mathematical network analysis methods. The free plugin-in offers tools for modeling pedestrian flow along networks, locating facilities at optimal places, measuring spatial accessibility between numerous origins and destinations, and detecting alternative travel routes, along both 2-D and 3-D networks.