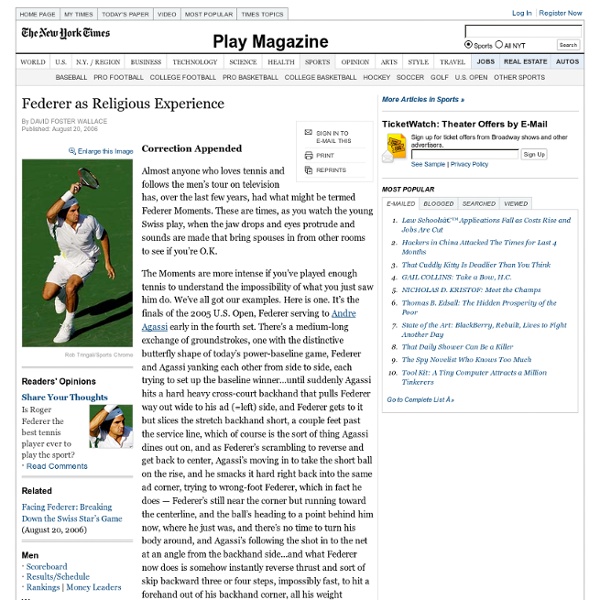 The Moments are more intense if you’ve played enough tennis to understand the impossibility of what you just saw him do. We’ve all got our examples. Here is one. It’s the finals of the 2005 U.S. Open, Federer serving to Andre Agassi early in the fourth set. Anyway, that’s one example of a Federer Moment, and that was merely on TV — and the truth is that TV tennis is to live tennis pretty much as video porn is to the felt reality of human love. Journalistically speaking, there is no hot news to offer you about Roger Federer. This present article is more about a spectator’s experience of Federer, and its context. Beauty is not the goal of competitive sports, but high-level sports are a prime venue for the expression of human beauty. The human beauty we’re talking about here is beauty of a particular type; it might be called kinetic beauty. Of course, in men’s sports no one ever talks about beauty or grace or the body. July 9’s men’s final, though, is everyone’s dream. Related:  new books • Sports

How To Read · Collaborative Fund “In my whole life, I have known no wise people who didn’t read all the time,” says Charlie Munger. “None. Zero.” More people understand this concept than follow through on it. That’s mostly because of time constraints. I asked a few of my investing friends how they read. Josh Brown, Reformed Broker: I try to read as much as possible but these days, I’m down to maybe 10 books a year. Ben Carlson, A Wealth of Common Sense: My sources for finding reading material are usually referrals from friends, colleagues, bloggers, suggestions from my blog readers and Twitter. Brent Beshore, Adventur.es: I get 95% of my reading materials through referrals and 5% through Twitter/Nuzzel discovery. Michael Batnick, Irrelevant Investor: I didn’t get into reading until I was in my mid-twenties, which explains a lot of why I tend to overdo it- I’m catching up for lost time. James Osborne, Bason Asset Management: Craig Shapiro, Collaborative Fund: Tadas Viskanta, Abnormal Returns: Barry Ritholtz, The Big Picture:

Where the Mets Found New Fans in 2015 Most popular team on Facebook from 2009 to 2014 Since April 1, 2015 When we published a national map of baseball fandom last year, based on Facebook data, it contained a painfully sad fact for Mets fans: In every ZIP code across every borough of New York, the Yankees were more popular than the Mets. The same was true on Long Island and in Westchester, northern New Jersey and Connecticut, and the same remains true today, with the Mets unable to claim the most total likes in any ZIP code. But now we come back to Mets fans with better news: The team has increased its footprint across the city in 2015, and, among new fans, the Mets were the most popular team across much of Brooklyn and Queens and on most of Long Island. The Mets’ gains were not limited to the New York area. About 1,000 miles west of New York, the Kansas City Royals don’t have the same kind of local competition, with the Rockies and the Cardinals both hundreds of miles away.

Ian Stewart's top 10 popular mathematics books | Books Ian Stewart is an Emeritus Professor of Mathematics at Warwick University and a Fellow of the Royal Society. He has written over 80 books, mainly popular mathematics, and has won three gold medals for his work on the public understanding of science. In collaboration with Terry Pratchett and Jack Cohen he wrote the Science of Discworld series. His new book, 17 Equations That Changed the World, is published by Profile. Buy 17 Equations That Changed the World from the Guardian bookshop "'Popular mathematics' may sound like a contradiction in terms. "It's not really surprising that few outside the subject appreciate it, though. "There are many ways to make real mathematics accessible. 1. The self-taught Indian genius Srinivasa Ramanujan had a flair for strange and beautiful formulas, so unusual that mathematicians are still coming to grips with their true meaning. 2. 3. 4. 5. 6. The classic text What is Mathematics? 7. 8. 9. 10.

The bat wars On a muggy late-September morning in Jalandhar's Bhargav Camp, I walked down a street, barely wide enough for a car and an autorickshaw to pass each other, lined with old one-storey homes. A tangle of electrical wires criss-crossed above. Ahead, cycle rickshaws plied the narrower routes. As I turned into an alley I saw an old woman, her hair white as an eggshell, sitting on a charpai outside her small brick home, stitching a football. Further down, I saw another woman on a charpai, stitching a football. A dishevelled young man eyed me curiously. "Isn't cricket equipment also made here?" He nodded, and casually pointed to the house behind him. He procured the raw material, he said, from a small manufacturing company in a different part of Jalandhar. This young man, those women on charpais, that man in the hallway, and several others hard at work behind closed doors are cogs in the country's sporting-goods manufacturing machine. But isn't SG competing with the brands they make bats for?

An Investing Master’s Degree in History & Math “Develop into a lifelong self-learner through voracious reading; cultivate curiosity and strive to become a little wiser every day.” — Charlie Munger Following The Four Abilities Every Investor Needs to be Successful post from a few weeks ago, I received a number of reader requests for book recommendations to learn more about financial market history and the basic math skills you need to be a good investor. There are no surefire ways to use quantitative and historical market patterns to create an investment strategy that works in all environments. The point of learning about these aspects of the financial markets is to gain a greater understanding of the different risks involved when investing and how you can use this information to increase your chances for positive results. Here’s my list to help get you your master’s degree in market math and financial history: Stocks for the Long Run andThe Future for InvestorsBy Jeremy Siegel These are two of my favorite books on Buffett.

Michael Phelps rehab ahead of swimmer's last Olympics in Rio 2016 - Olympics An abridged version of this story appears in the Nov. 16, 2015, issue of Sports Illustrated. To subscribe, click here. For almost five days in the fall of 2014, the most decorated Olympian in history lay curled in a fetal position in his Baltimore home, crestfallen and fearful, embarrassed at his behavior and uncertain of his future. Over three Olympics, from 2004 through ’12, Michael Phelps had won 18 gold medals and 22 medals overall, each total more than anyone ever. His life had been turned into a flat-screen American athletic dream: A skinny boy with big feet (and ears) had been transformed by endless laps and a wise coach into a red-white-and-blue, gold-medal-winning machine. Now that bubble was a prison of sorts. Phelps’s mother, Debbie, who directs the Education Foundation of Baltimore County Public Schools, got the news at work in a call from Phelps’s agent, Peter Carlisle. Carlisle also phoned Bob Bowman, Phelps’s longtime coach. Phelps apologized in a public statement.

Skating Where the Puck Was: The Correlation Game in a Flat World (Investing for Adults Book 2) eBook: William J Bernstein: Kindle Store The Ugly Truth About Horse Racing - Andrew Cohen There are essentially three types of people in horse racing. There are the crooks who dangerously drug or otherwise abuse their horses, or who countenance such conduct from their agents, and who then dare the industry to come catch them. Then there are the dupes who labor under the fantasy that the sport is broadly fair and honest. And there are those masses in the middle—neither naive nor cheaters but rather honorable souls—who know the industry is more crooked than it ought to be but who still don't do all they can to fix the problem. The first category, the cheaters, are a small, feral minority still large enough to stain the integrity of the sport for everyone else. And that's why exposés about the abuse of racehorses, like the one posted last week by Joe Drape in The New York Times, are so important. The Clubhouse Turn The story in question, "PETA Accuses Two Trainers of Cruelty," came on like a thunderclap and is profound for many reasons. The Backstretch The Finish Line