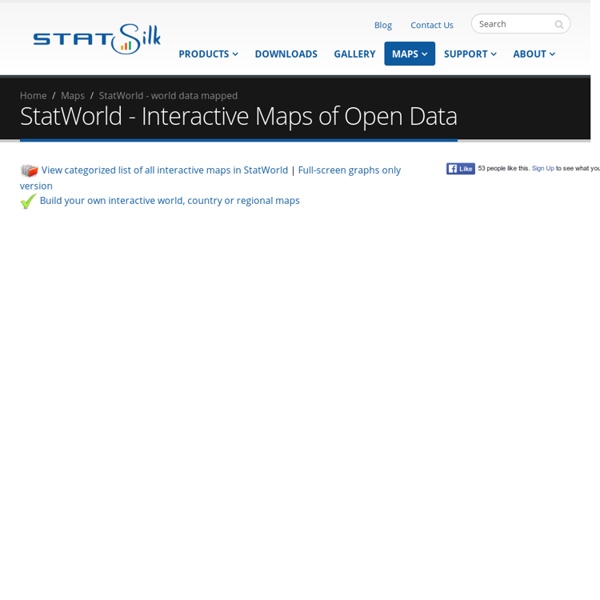 Cartography of the Anthropocene - Globaïa The Anthropocene: A primer. The Anthropocene. We’re already there. This is our time, our creation, our challenge. Officially, this epoch does not exist. Data Visualization: 20+ Useful Tools and Resources There are plenty of cool technologies available to collect and examine data. Both web and desktop applications have provided some really great interfaces to fall in love with data mining, and with the rise in popularity we have noticed an increased number of infographics created over the past few years. Pin it Today we’ll be looking into some really cool and popular online resources for data visualization. Building an Architecture of Participation With access to ubiquitous technology, educators are in a position to become architects of opportunity and participation in their classrooms. This is a serious departure from a traditional classroom model and revisits the role of student and teacher in the learning endeavor. Article on Michael Wesch He is still giving talks, and the titles now all include the word “wonder.”

Latin American Public Opinion (LAPOP) EXPERT mode: Beyond the Beginner mode's functions, the user can define filters (select sub-classes), recode variables, and control for third variable effects (e.g., via regression analysis). PRESET (Developing site) mode. You could get charts, graphs and maps of previously issued queries in the system Preset This is an on-line querying system to the original databases (micro-data) of the surveys of the Latin American Public Opinion Project (LAPOP), Vanderbilt University. LAPOP is a project directed by Professor Mitchell A. The Geotagger's World Atlas Every city has something unique about it, whether it’s a memorial statue, a cool coffee shop, a world-renowned museum or a local pizza parlor. These places are visited by hundreds or maybe even thousands of people a year, which translates to dozens of photos, many of which are geotagged to show the location of these popular and special places. So, what would happen if you took all of those photos and created a map, linking the photos to show individual journeys and locations? Well, you would end up a neat sketch-like image of the location, filled with individual travels and popular locations.

Qualitative Measures « PreviousHomeNext » Qualitative research is a vast and complex area of methodology that can easily take up whole textbooks on its own. The purpose of this section is to introduce you to the idea of qualitative research (and how it is related to quantitative research) and give you some orientation to the major types of qualitative research data, approaches and methods. In the summer of 2009, students from Afghanistan and America began documenting their lives. They communicated by pairing their photographs—a visual dialogue free of any language barrier. This website presents the pairs that speak loudest to these students, and allows you to join the conversation. Recommend pairs that speak to or upload your own. اریک ریویرا، 15 ساله در روز رژه پورتو ریکویها بودم و عکس می کندم.

Acerca de Nosotros The Sunlight Foundation is a national, nonpartisan, nonprofit organization that uses the tools of civic tech, open data, policy analysis and journalism to make our government and politics more accountable and transparent to all. Our vision is to use technology to enable more complete, equitable and effective democratic participation. Our overarching goal is to achieve changes in the law to require real-time, online transparency for all government information, with a special focus on the political money flow and who tries to influence government and how government responds. And, while our work began in 2006 with only a focus on the U.S. Congress, our open government work now takes place at the local, state, federal and international levels. We believe that information is power, or, to put it more finely, disproportionate access to information is power.

Pippa Norris Datasets May 6th 2010 British General Election Constituency Results Release 5.0 The May 6th 2010 British General Election Constituency Results are available for downloading in Excel, Google docs, and PASW/SPSS formats. The dataset includes the British constituency results with the 2005 and 2010 share of the vote for each party, the candidates for each party (sex and race), the vote swing, and seat changes. The 2005 election results are based on the PA (Rallings and Thrasher) notional results (due to boundary changes since the previous election). Mapline Blog How to Make an Awesome Data Visualization with Pin Map What is a Pin Map? 1 location = 1 pin Got the idea?