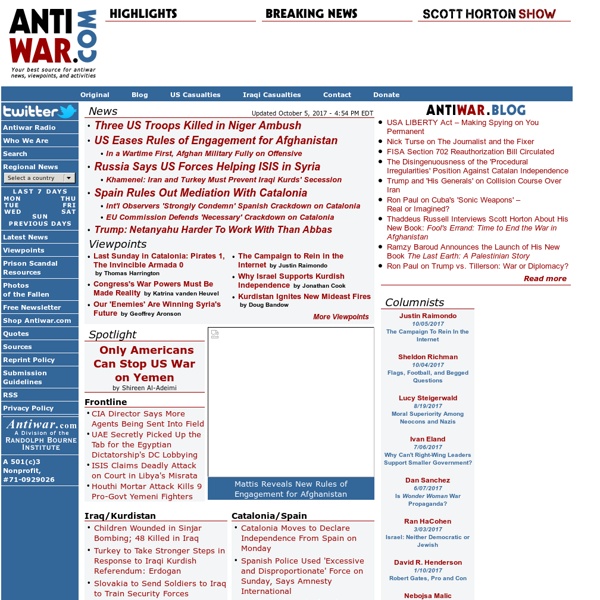 The Geopolitics of World War III Editor’s note: This was received by friends. This is a powerful piece. Please take the time to watch the videos and make sure everyone you know has a chance to see this. The World Factbook People from nearly every country share information with CIA, and new individuals contact us daily. If you have information you think might interest CIA due to our foreign intelligence collection mission, there are many ways to reach us. If you know of an imminent threat to a location inside the U.S., immediately contact your local law enforcement or FBI Field Office. For threats outside the U.S., contact CIA or go to a U.S. Independent Media Center West Papua: Neglected genocide - 29 Nov 2013 Indonesian police use Shootings, killings, beatings, arrests on West Papuan independence rallies Indonesian police have opened fire on peaceful protesters in Jayapura, with at least four gunshot wounds and one death. West Papuan activists and families have been forced to flee to the jungle for safety.

Intercepts caught Assad rejecting requests to use chemical weapons, German paper says BERLIN — Syrian President Bashar Assad has repeatedly rejected requests from his field commanders for approval to use chemical weapons, according to a report this weekend in a German newspaper. The report in Bild am Sonntag, which is a widely read and influential national Sunday newspaper, reported that the head of the German Foreign Intelligence agency, Gerhard Schindler, last week told a select group of German lawmakers that intercepted communications had convinced German intelligence officials that Assad did not order or approve what is believed to be a sarin gas attack on Aug. 21 that killed hundreds of people in Damascus’ eastern suburbs. The Obama administration has blamed the attack on Assad.

Greenpeace: “Overfishing Denier” Failed to Disclose Industry Millions Greenpeace is asking the University of Washington to investigate Dr. Ray Hilborn — a professor at its School of Aquatic and Fisheries Sciences — for failing to disclose that he has accepted millions of dollars in research money, and for “consulting” services, from fishing industry groups. Hilborn, whom Greenpeace calls an “overfishing denier,” is a well-known opponent of stringent regulations aimed at protecting sustainable levels of fish populations. In response to the allegations, he issued a statement accusing the environmental group of bringing up the funding issue because it is “unable to attack the science I and my collaborators do.” While his positions are often cited by the fishing industry, what was previously not known is that Hilborn has accepted $3.5 million in corporate research funding from 2003 to 2014. In addition, he stated that some of the organizations Greenpeace labels “industry groups” are actually small fishing communities in Alaska.

gov - Department of Defense Websites One of the missions of Defense.gov, the official web site for the Department of Defense, is to serve as the starting point for finding U.S. military information online. These DOD Sites pages contribute to that mission by providing these services: A quick-reference listing of the top DOD Sites, Direct access to the databases of all registered DOD Sites. Academy Acquisition, Technology and Logistics, Deputy Under Secretary of Defense for (AT&L) Administration Advanced Advisory Aerospace Agencies, Defense Air Force Armed Forces Day Army Army National Guard Asia-Pacific Assistant Secretary of Defense

Global Network - uav articles The US military’s use of unmanned aircraft to kill terror suspects in foreign countries has come under media scrutiny in Germany. US bases in Germany may be involved in drone killings. German ARD public television and the national daily paper Süddeutsche Zeitung have claimed that a satellite link located at the US air force base at Ramstein in southern Germany plays a key role in American drone attacks on targets in Africa. The reports also raised questions about how much the German government has known about the controversial practice. "The killing of a terror suspect using an armed drone outside of an armed conflict could - if the federal government knows about it and doesn't protest against it - make it complicit in a human rights offence," German human rights lawyer Thilo Marauhn told ARD. Killing via satellite?

Obama Warned on Syrian Intel Exclusive: Despite the Obama administration’s supposedly “high confidence” regarding Syrian government guilt over the Aug. 21 chemical attack near Damascus, a dozen former U.S. military and intelligence officials are telling President Obama that they are picking up information that undercuts the Official Story. MEMORANDUM FOR: The President FROM: Veteran Intelligence Professionals for Sanity (VIPS)