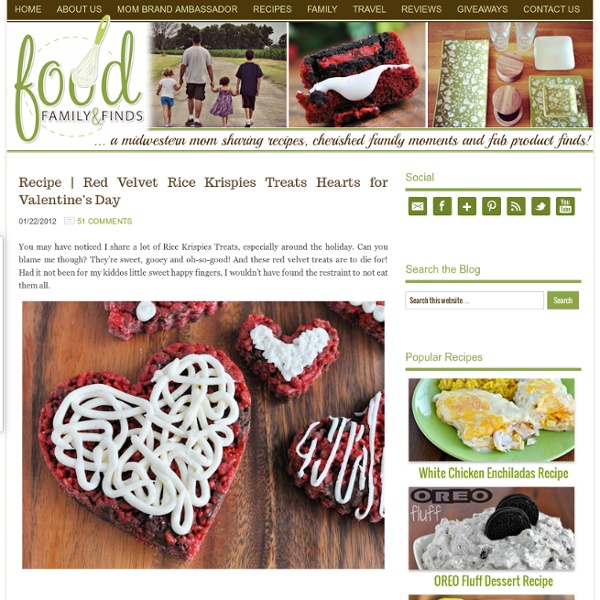 You may have noticed I share a lot of Rice Krispies Treats, especially around the holiday. Can you blame me though? They’re sweet, gooey and oh-so-good! And these red velvet treats are to die for! Had it not been for my kiddos little sweet happy fingers, I wouldn’t have found the restraint to not eat them all. If you’re making these to just eat, no need to get fancy but if you’re making them for a special occasion like Valentine’s Day, you’ll want to check out Wilton’s selection of cookie cutters. In a small jelly roll pan you can press the treats thin enough to cut with the heart shaped cutters. With a piping bag (or plastic sandwich bag) you can frost these with pretty designs in a cream cheese frosting that makes them even sweeter. Share ‘em, eat ‘em, whatever you do, don’t leave them unattended and expect to find anything left but crumbs left over. Red Velvet Rice Krispies Treats Hearts Author: Cat Davis Type: Dessert Serves: 8 Ingredients Instructions

Chocolate Truffles Recipe : Alton Brown Directions Place the 10 ounces of chocolate and butter in a medium size glass mixing bowl. Microwave for 30 seconds. Homemade Hostess Cupcakes Well, our Christmas break is almost over... boohoo :-(It's been a fun couple weeks! It seems like every Christmas break we go through an entertainment trend. This year's trend was board games, especially the game Clue (we played it probably 10 times).

Kodachrome Curtains - Updated! Now with lampy goodness! So, it's been a while since I've made anything Craftster-worthy, but my husband and I busted out the Dremel tool a few days ago and we made this: It's a pair of curtains made out of old Kodachrome slides! I'm really interested in photography, and will buy old cameras in antique and thrift stores in order to develop film that's inside of it.

How to wrap a gift: Use tissue paper for a... Photo by Roberto Caruso I’m giving away trade secrets here. You know those beautiful floral looking decorations you sometimes see in magazines hovering over a festive table? Or in a kid’s room, re-invented as a mobile? Over 100 Quick and Easy Recipes We Have Preparation and Cooking Times of 30 Minutes or Less The majority of recipes we offer can be both prepared and cooked in 30 minutes or less, from start to finish. A number of them can also be prepared ahead of time and enjoyed later. So you can prepare more than what is needed for a single meal. Then you can use the additional amount the next day or when time is short, with little or no additional preparation time required.

Death By Oreo Cupcakes They are probably the best Oreo cakes I have ever tried. A lot of cake's that I have experimented with before are like a vanilla cake with bits of Oreo in them, which didn't really give them enough Oreo flavor. But these were a lot better. I used a dark chocolate fudge cake mix instead of just a regular chocolate cake mix, which went really well with the cookies and gave the cakes just a little more flavor. So, in this recipe there is Oreo's in the cake, in the frosting, and at the bottom is a Oreo surprise.

Rose and Feather Hair Clip Tutorial I love this hair pin, so sweet. Fit for tea time, no? Or maybe stopping to smell the flowers… or the blue spruces…whatever suits your fancy. Caramelized Chicken with Jalapeno Cream Want to know how to make one heck of a delicious chicken dish? Good. Because I was going to tell you anyway. First up. Chop up some jalapenos and other good stuff.