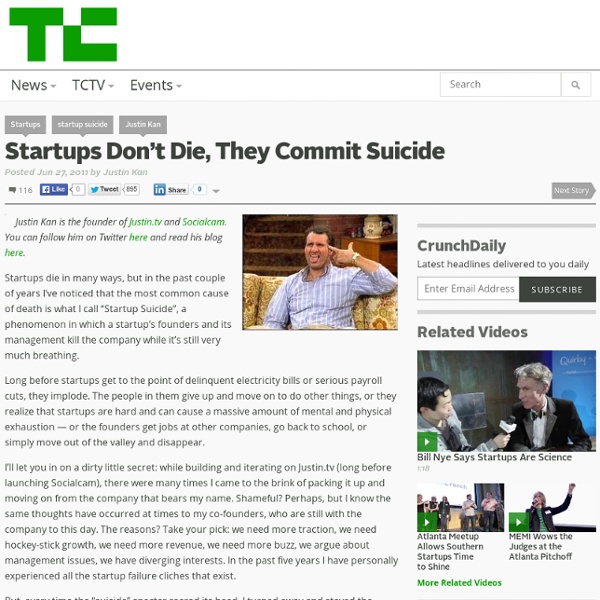 Justin Kan is the founder of Justin.tv and Socialcam. You can follow him on Twitter here and read his blog here. Startups die in many ways, but in the past couple of years I’ve noticed that the most common cause of death is what I call “Startup Suicide”, a phenomenon in which a startup’s founders and its management kill the company while it’s still very much breathing. Long before startups get to the point of delinquent electricity bills or serious payroll cuts, they implode. The people in them give up and move on to do other things, or they realize that startups are hard and can cause a massive amount of mental and physical exhaustion — or the founders get jobs at other companies, go back to school, or simply move out of the valley and disappear. I’ll let you in on a dirty little secret: while building and iterating on Justin.tv (long before launching Socialcam), there were many times I came to the brink of packing it up and moving on from the company that bears my name. Related:  Leadership • panier quinze deux

Why We Prefer Founding CEOs You’re just a rent-a-rapper, your rhymes are minute-maidI’ll be here when it fade to watch you flip like a renegade”—Rakim, Follow The Leader When my partner Marc wrote his post describing our firm, the most controversial component of our investment strategy was our preference for founding CEOs. The conventional wisdom says a startup CEO should make way for a professional CEO once the company has achieved product-market fit. In this post, I describe why we prefer to fund companies whose founder will run the company as its CEO. The macro reason: that’s the way most of the great technology companies have been built At Andreessen Horowitz, our primary goal is to invest in the great technology franchises. (*) While not technically cofounders, Andy Grove and Thomas Watson, Sr. were the driving force behind Intel and IBM, respectively. Two more quick data points before I move on to explain why this happens. The underlying reasons The innovation business These innovations are product cycles.

Kevin Rose's Tips Kevin Rose, Digg's founder, spoke this week at Webstock in Wellington, New Zealand and covered 10 amazing tips for entrepreneurs. They were truly insightful - and obviously came straight from the heart and soul of someone who worked a day job and built his dream after hours. This is our take of what he had to say. 1: Just Build It: You don't need anyone's approval and in fact, you probably won't get it, so don't even try. 2: Iterate: Build, release and iterate. 3: Hire Your Boss: Make sure you hire people that you would want to work for, who challenge you and you can learn from. 4: Demand Excellence: Ensure staff are committed to and understand your vision. 5: Raising Money: The higher your evaluation is, the more equity you have to work with. 6: Hack the Press: Hit up the lower-end bloggers at your favorite tech blog. 8: Connect With the Community: Hold a live town hall where you can collect feedback and get advice from your users.

The myth of the overnight success tech Angry Birds was Rovio’s 52nd game. They spent eight years and almost went bankrupt before finally creating their massive hit. Pinterest is one of the fastest growing websites in history, but struggled for a long time. Pinterest’s CEO recently said that they had “catastrophically small numbers” in their first year after launch, and that if he had listened to popular startup advice he probably would have quit. You tend to hear about startups when they are successful but not when they are struggling. Startups are hard, but they can also go from difficult to great incredibly quickly.

Full stack startups Many of today’s most exciting startups were tried before in a different form. Suppose you develop a new technology that is valuable to some industry. The old approach was to sell or license your technology to the existing companies in that industry. The new approach is to build a complete, end-to-end product or service that bypasses existing companies. Prominent examples of this “full stack” approach include Tesla, Warby Parker, Uber, Harry’s, Nest, Buzzfeed, and Netflix. Bad product experience. The full stack approach lets you bypass industry incumbents, completely control the customer experience, and capture a greater portion of the economic benefits you provide. The challenge with the full stack approach is you need to get good at many different things: software, hardware, design, consumer marketing, supply chain management, sales, partnerships, regulation, etc. My guess is we are still at the very beginning of the full stack movement.

What’s The Most Difficult CEO Skill? Managing Your Own Psychology. “It’s fucked up when your mind’s playin’ tricks on ya” —The Geto Boys By far the most difficult skill for me to learn as CEO was the ability to manage my own psychology. Organizational design, process design, metrics, hiring and firing were all relatively straightforward skills to master compared to keeping my mind in check. Over the years, I’ve spoken to hundreds of CEOs all with the same experience. Nonetheless, very few people talk about it, and I have never read anything on the topic. It’s like the fight club of management: The first rule of the CEO psychological meltdown is don’t talk about the psychological meltdown. At risk of violating the sacred rule, I will attempt to describe the condition and prescribe some techniques that helped me. If I’m Doing a Good Job, Why Do I Feel So Bad? Generally, someone doesn’t become CEOs unless she has a high sense of purpose and cares deeply about the work she does. And to rub salt into the wound and make matters worse, it’s your fault. 1. 2. 1.

Hard work This is our third guest post written by a London-based VC. To allow them to speak plainly without jeopardising their fund or their career in the small village that is the London VC scene, I’m allowing them to post anonymously. FYI, LondonVC is a genuine VC and TechCrunch Europe has met them face to face. One of the biggest challenges for any investor (regardless of the stage/type of investment they target) and founders alike is hiring great talent. Something I’ve realised and have to admit is that while obviously the absolute pool of talent is smaller here in the UK/Europe than it is in the U.S. As anyone who’s ever been there or visited will attest, in Silicon Valley everyone is working *all of the time*. And while this might seem unhealthy, not scalable, obsessive, manic or simply ridiculous, from an ecoystem perspective it’s basically unbeatable. Where is the sense of urgency? You have to remember that the culture there is “launch and iterate”.

Solid Rocks & Flowing Rivers On Twitter last night, Dave Winer pointed back to a prescient* post he wrote in March of last year that includes a reference to the Chinese proverb: “If you sit by the river long enough you will see the body of your enemy float by.” When I read that proverb last year, my first thought was, “What if your enemy is sitting by the river also? Will it be long enough for them to see your body float by?” Over the years, I’ve observed that many people confuse fads and evolving methods with those things that actually are important in life and work: The never-changing truths related to human nature, trust, respect, relationships and integrity, among others. Dave and I share a constant amazement (bemusement or dismay might be better terms) whenever people become intoxicated over something they believe is new that we recognize as being built on a foundation that was created and set in motion decades ago, or longer. When we’re in the river, we need a great understanding of the flow.

25 Pieces of Bullshit You Hear About Startups This list needs no explanation: 1) You need a technical co-founder. 2) We're really interested in what you're up to, but would love to see just a little more traction before we fund it. 3) No one else can do this. 4) We decided not to charge our initial customers. 5) It's easier to get funded on the west coast. 6) This is projected to be a $54 billion dollar industry by 2019. 7) Google can't do this. 8) We're oversubscribed in this round. 9) We wouldn't take $30 million if someone offered to buy us right now. 10) We only fund great entrepreneurs. 11) This accelerator is really hard to get into. 12) We're using lean startup methodology. 13) Google will have to buy us1. 14) I built that entire business for my previous company. 15) We have an agency that is going to distribute us to all the major brands, so we fully expect huge distribution and revenue in the next year. 16) We're not raising money right now. 17) We have proprietary technology. 18) We need to move fast otherwise we'll miss this opportunity.

The Anatomy of Determination September 2009 Like all investors, we spend a lot of time trying to learn how to predict which startups will succeed. We probably spend more time thinking about it than most, because we invest the earliest. Prediction is usually all we have to rely on. We learned quickly that the most important predictor of success is determination. In most domains, talent is overrated compared to determination—partly because it makes a better story, partly because it gives onlookers an excuse for being lazy, and partly because after a while determination starts to look like talent. I can't think of any field in which determination is overrated, but the relative importance of determination and talent probably do vary somewhat. I don't mean to suggest by this comparison that types of work that depend more on talent are always more admirable. If determination is so important, can we isolate its components? The simplest form of determination is sheer willfulness. Being strong-willed is not enough, however.