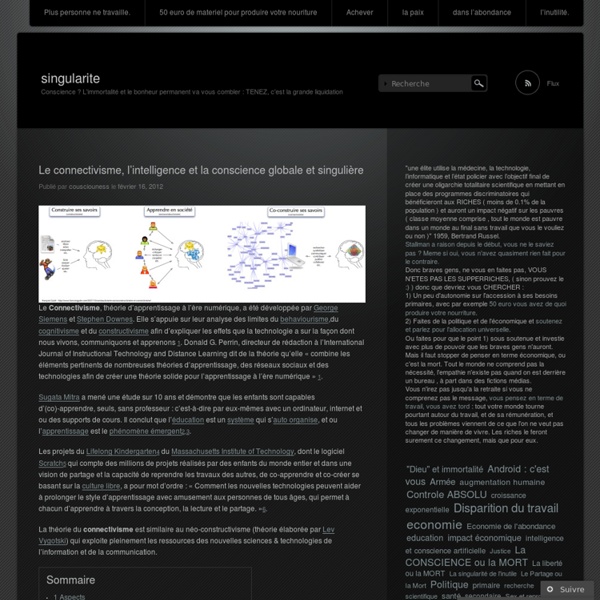 Our Growth Mindset Please forgive me if you have already heard me refer to the concept of “growth mindset,” a notion we owe to the renowned Stanford psychologist Carol Dweck, whose book, Mindset: The New Psychology of Success, is one of the most thought-provoking texts about human psychology to have been published in a long time. For Dweck, much of how people approach the challenges they face in life, as well as the way in which they define their sense of satisfaction in meeting those challenges, hinges on the outlook they have on the world. NB. If you do not have the chance to read her book in full, I would highly recommend an article describing her work that was published in New York Magazine a few years ago, entitled “How Not to Talk to Your Kids” ( or this brief interview on YouTube.

Connectivism Editor’s Note: This is a milestone article that deserves careful study. Connectivism should not be con fused with constructivism. George Siemens advances a theory of learning that is consistent with the needs of the twenty first century. His theory takes into account trends in learning, the use of technology and networks, and the diminishing half-life of knowledge. It combines relevant elements of many learning theories, social structures, and technology to create a powerful theoretical construct for learning in the digital age. Entrance testing is not the answer University students need to learn to write for different disciplines and assignments, and testing the skills they learned in high school isn’t relevant to what they will need to learn. by Roger Graves and David Slomp We commend Nicholas Dion and Vicky Maldonado for calling for assessments of university students’ writing (“We need to assess student literacy skills”) in University Affairs. We agree with their argument that without these assessments, universities will face budget cuts and students have no way of proving their worth as writers.

The Power (and Peril) of Praising Your Kids What do we make of a boy like Thomas? Thomas (his middle name) is a fifth-grader at the highly competitive P.S. 334, the Anderson School on West 84th. Slim as they get, Thomas recently had his long sandy-blond hair cut short to look like the new James Bond (he took a photo of Daniel Craig to the barber). Unlike Bond, he prefers a uniform of cargo pants and a T-shirt emblazoned with a photo of one of his heroes: Frank Zappa. Thomas hangs out with five friends from the Anderson School. An Introduction to Neural Networks Prof. Leslie Smith Centre for Cognitive and Computational Neuroscience Department of Computing and Mathematics University of Stirling. lss@cs.stir.ac.uk last major update: 25 October 1996: minor update 22 April 1998 and 12 Sept 2001: links updated (they were out of date) 12 Sept 2001; fix to math font (thanks Sietse Brouwer) 2 April 2003 This document is a roughly HTML-ised version of a talk given at the NSYN meeting in Edinburgh, Scotland, on 28 February 1996, then updated a few times in response to comments received. Please email me comments, but remember that this was originally just the slides from an introductory talk!

In praise of the squishy subjects - Capital Read, Inkless Wells Dear readers: This one’s long. You may want to settle in. About a year ago the Canada Millennium Scholarship Foundation approached me to contribute a paper in conjunction with a conference the group would host, called Opportunities-Excellence. They invited me to write about a topic that interested me having something to do with innovation and the knowledge economy. 77 Ways to Learn Faster, Deeper, and Better If someone granted you one wish, what do you imagine you would want out of life that you haven’t gotten yet? For many people, it would be self-improvement and knowledge. Newcounter knowledge is the backbone of society’s progress. Great thinkers such as Leonardo da Vinci, Thomas Edison, Benjamin Franklin, Albert Einstein, and others’ quests for knowledge have led society to many of the marvels we enjoy today. Your quest for knowledge doesn’t have to be as Earth-changing as Einstein’s, but it can be an important part of your life, leading to a new job, better pay, a new hobby, or simply knowledge for knowledge’s sake — whatever is important to you as an end goal. Life-changing knowledge does typically require advanced learning techniques.

A Non-Mathematical Introduction to Using Neural Networks The goal of this article is to help you understand what a neural network is, and how it is used. Most people, even non-programmers, have heard of neural networks. There are many science fiction overtones associated with them. And like many things, sci-fi writers have created a vast, but somewhat inaccurate, public idea of what a neural network is. Most laypeople think of neural networks as a sort of artificial brain. Working Memory by Saul McLeod published 2008, updated 2012 Atkinson’s and Shiffrin’s (1968) multi-store model was extremely successful in terms of the amount of research it generated. However, as a result of this research, it became apparent that there were a number of problems with their ideas concerning the characteristics of short-term memory.