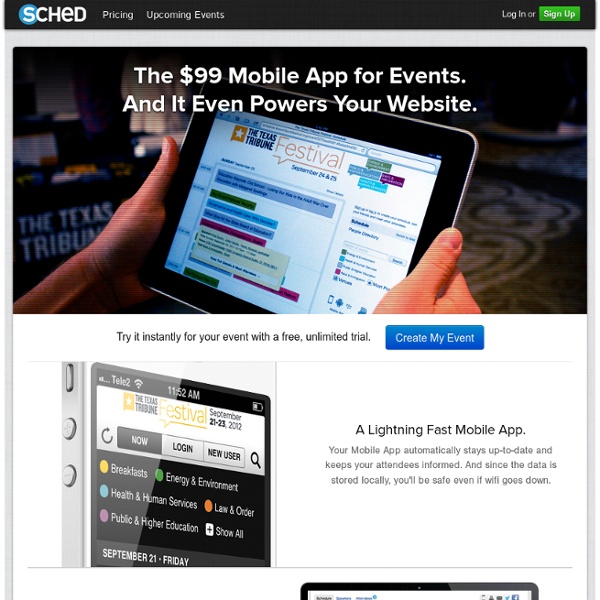 Tour / Event Calendar & Agenda Builder for Conferences & Festiva Manage your event's schedule the smart & easy way. Using Sched reduces the amount of work and errors that occur when managing the same data across many formats. Give your event a beautiful, custom branded website and mobile app, social networking, personal agenda builder and a social directory for your participants. XoXxXEmo and Proud Of ItXxXoX A study by Harvard University found that when a person gets a job, 85 percent of the time, it is because of their attitude. Only 15 percent of the time, because of how smart they are and how many facts and figures they know. As a university or college student, what is your attitude towards your future?

OpenConferenceWare is Beautiful Software for Events An open source development team in Portland, Oregon has released OpenConferenceWare, a sophisticated free package for processing event session proposals and displaying event schedules. Igal Koshevoy and Reid Beels built the system and put it on display as the scheduling system for the forthcoming Open Source Bridge conference, Portland's response to losing the popular O'Reilly event OSCON to San Jose, California. Events planners would be well served to check out the software; it's not just free and extensible, it's also quite full-featured right out of the box. Developers familiar with UNIX and Ruby on Rails will be able to use OCW right away.

WP SMASHING WordPress Theme at Bust A Theme In creating WP SMASHING I updated the functionality of the just-released WP CALENDAR by adding a theme options page in the admin menu. The plugin allows you to choose how the calendar functionality is displayed – if you choose to display it all. WP SMASHING is completely widget-ready with 4 widget zones (3 column footer and a single column sidebar). You can choose to use the calendar on the index page or not, it’s up to you.

Logis Show - Intellectual Property / Fields / Law=Wybo_Wiersma_4 The most conspicuous field of power is that of law. Intellectual Property is created by law, and IP could have been, and can be different, or even not exist at all, all depending on the law. The important question for this field is who's interests will be law, that of authors, publishers, the public, or society. Something that is easily forgotten is that the law is both the subject of the disputes about IP, and - by referring to the illegality of certain acts - used as a means in the conflicts about it. Law is considered to be established democratically in the West, but lobbying and misinformation also play their part there. Especially internationally, force and the bundling of treaties, such as in the case of the WTOs TRIPs which included IP clauses, are also important ways to shape the law.

Crowd Campaign Lets Marketers Tap Into The Social Graph To Promote Contests The Social Collective, a LaunchBox Digital-incubated startup, recently launched to provide event planners and marketers with a cost-effective browser-based service targeted at enhancing the event experience for both attendees and sponsors. The Social Collective even caught the eye of high-profile event organizers and was used during SXSW and Oracle Open World this year. Today, the startup is launching a second product, called Crowd Campaign, to let users easily launch a contest and then leverage the power of their social graph to promote the campaign. We have free one-year premium accounts (worth $5000 for each account) for the first 100 TechCrunch readers who sign up for a campaign and enter the “techcrunch” promo code here. When setting up a contest via the web-based product, Crowd Campaign offers the ability to customize the contest’s subdomain, upload a logo and background image,write a Terms & Conditions page, set colors and styles, insert Google Analytics tracking code and more.

Easy WordPress and Google Calendar Integration Google Calendar was meant not only to make your life easier with a free, easily-accessible online calendar. You can also use Google Calendar to collaborate and share your events and online activities with other people. But for some, it’s a bit complicated to have to ask others to view your Google Calendar from their own accounts. Logis Show - Intellectual Property / Fields / Norms=Wybo_Wiersma The last, but not least important field, is that of norms. These are the norms, views and ideas that make up the public opinion. It is how people think about IP, how they act towards it, and also how they view others' behaviour towards it. Most effective laws depend on, and correspond to, widely held norms, rather than on constant policing. As historians know, norms differ with time and place, and are often determined by historic factors.

bopuc/weblog: A brief history of Podcasting The first Podcaster The first Podcast Celebrity. Coca Cola anybody? Ubuntu Themes: 61 Awesome Themes for Linux To be honest, i will not claim i am a fan of Ubuntu and that i have installed it on my home or personal pc but since i observed that there is a lot of our users taking interest in our articles with the key word of “Linux” or “Ubuntu” so i decided to find some cool Ubuntu/Gnome themes and make them available for our readers. I must confess i love cool themes, wallpapers and other things that feels good on the user eyes. We have also earlier compiled a list of 37 Best Windows 7 Themes for our readers as well 30 Awesome Windows 7 Themes and SciTE SciTE is a SCIntilla based Text Editor. Originally built to demonstrate Scintilla, it has grown to be a generally useful editor with facilities for building and running programs. It is best used for jobs with simple configurations - I use it for building test and demonstration programs as well as SciTE and Scintilla, themselves. SciTE is currently available for Intel Windows (XP or later) and Linux compatible operating systems with GTK+. It has been run on Windows 7 and on Fedora 22 and Ubuntu 15.04 with GTK+ 2.24. Here is a screenshot of SciTE.