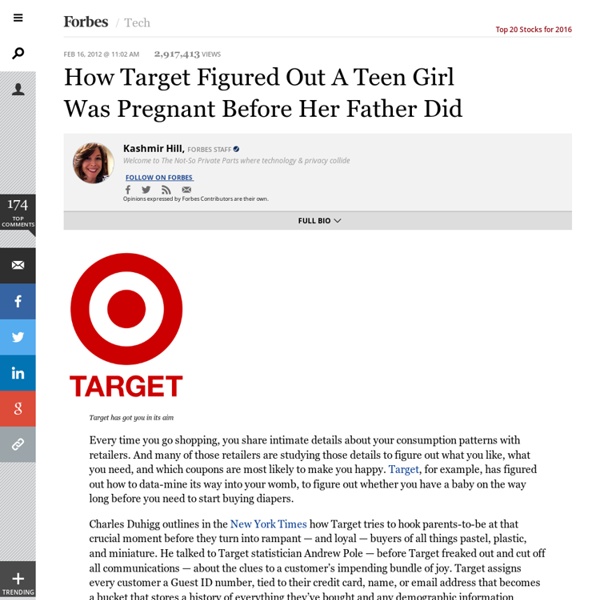 Target has got you in its aim Every time you go shopping, you share intimate details about your consumption patterns with retailers. And many of those retailers are studying those details to figure out what you like, what you need, and which coupons are most likely to make you happy. Target, for example, has figured out how to data-mine its way into your womb, to figure out whether you have a baby on the way long before you need to start buying diapers. Charles Duhigg outlines in the New York Times how Target tries to hook parents-to-be at that crucial moment before they turn into rampant — and loyal — buyers of all things pastel, plastic, and miniature. [Pole] ran test after test, analyzing the data, and before long some useful patterns emerged. Or have a rather nasty infection… As Pole’s computers crawled through the data, he was able to identify about 25 products that, when analyzed together, allowed him to assign each shopper a “pregnancy prediction” score. Bold is mine.

Gonski report - Vast education ambition a massive How Companies Learn Your Secrets Pole has a master’s degree in statistics and another in economics, and has been obsessed with the intersection of data and human behavior most of his life. His parents were teachers in North Dakota, and while other kids were going to 4-H, Pole was doing algebra and writing computer programs. “The stereotype of a math nerd is true,” he told me when I spoke with him last year. “I kind of like going out and evangelizing analytics.” As the marketers explained to Pole — and as Pole later explained to me, back when we were still speaking and before Target told him to stop — new parents are a retailer’s holy grail. Most shoppers don’t buy everything they need at one store. There are, however, some brief periods in a person’s life when old routines fall apart and buying habits are suddenly in flux. “We knew that if we could identify them in their second trimester, there’s a good chance we could capture them for years,” Pole told me. Take backing your car out of the driveway. “No,” she said.

More R and Python Gonski's $5 billion School Fee All eyes on Gillard and Gonski Reports of rebel Labor MPs' plans to spill the PM, and Gonski's $5 billion cost, as online political editor Tim Lester runs over the day's political news. P Federal government funding for every student regardless of the income of their parents or the wealth of their school is now part of a ''citizenship entitlement'', with the Prime Minister, Julia Gillard, yesterday in effect declaring it part of a new Australian compact. But while Ms Gillard committed her government to fund all schools regardless of wealth or need, she refused to commit the money that the long-running review of school funding says is needed to restore Australia's ailing education system to health. Ticking all the boxes ... But Ms Gillard repeatedly refused to commit to the funding. Advertisement Instead, another round of consultations and working parties will be established with stakeholders including state education ministers. Yes No

EU wheat firms after Russian crop forecast cut Nadal or Djokovic? Predicting the winner of the US Open 9 September 2013Last updated at 10:03 ET By Kim Gittleson BBC reporter, Flushing Meadows, New York Who will win this year's US Open tennis championship - Novak Djokovic or Rafael Nadal? Most pundits will have an opinion on who will triumph in this year's US Open men's final - Rafael Nadal or Novak Djokovic - but the best insights into who will be crowned champion will come from the same technology that has helped cities to lower crime rates and plan for extreme weather. Deep in the bowels of Arthur Ashe Stadium in Flushing Meadows, Queens, New York, beats the data heart of the 2013 US Open. In a bland room accessed through an unmarked door, more than 60 laptops are piled high, arranged like a command control centre for a mission to the moon. This room is known as "scoring central", according to US Open officials. It's where data is pushed to scoreboards on Louis Armstrong Court - the second largest US Open tennis court - or to TV screens across the globe. 'Unusual statistics' Djokovic v Nadal

Don’t Mention The Class War Parents have plenty to study in the Gonski report — including data that shows expensive schooling isn't producing rich results for the students, or the country. Let's start with a simple statement with which everyone can agree: education is the key to this country's future. Now, a statement with which large numbers of people will disagree vehemently: private schools are making Australia dumber. Please discuss. But, before you do, consider this fascinating conundrum. Over the past decade or so, there has been a significant drift of students away from government schools. That latter point was one stressed by Prime Minister Julia Gillard on Feb. 20 at her press conference, held to accompany the release of the so-called Gonski report on school-funding reform. But of the correlation between that decline and the rise of non-government schooling, she said not a word. This, of course, is hardly surprising, in political terms. Nous Group Report "Schooling Challenges & Opportunities",August 2011

Underinsurance in Australian Life Insurance Underinsurance in the Australian Life insurance industry is becoming a growing concern. For individuals having adequate Life Insurance and Income Protection Insurance is one of the most important parts of a financial plan. Life Insurance and Income Protection are slowly being recognised for their importance for financial certainty in the event one suffers a sudden and unexpected illness, injury or premature death. Recent findings by TNS Research suggest that: • less than 5 percent of Australians have adequate Life Insurance Cover • there are over 5 million families within Australia than have dependent children • Australia’s insurance gap is over $1.4 billion Other reasons include the perception government benefits will provide adequate support, that the cost of insurance is too expensive when in reality the cost of life insurance in some cases can be lower than health, home and car insurance and that insurance companies will not pay out in the event of a claim.

priorityMatrixForBigData Reading Gonski: a mud map for the minefield - The Drum Opinion - David Gonski has provided a potent instrument with which to affect education reform, if the Gillard Government were politically adept to use it. Find More Stories Reading Gonski: a mud map for the minefield Ben Eltham I come from a teaching family. My parents met at teachers college. My dad went off to a varied career that included national service, town planning, university lecturing, and a stint as policy advisor to former state Labor education minister, Dean Wells. I saw a bit of Wells as a kid and young adult, therefore. Wells' is a voice worth recalling in the current education debate, because during his term as education minister under Peter Beattie, Wells fought in vain against John Howard's then-education minister David Kemp, who pushed through many of the schools funding reforms that remain with us today. These were the changes to the way non-government schools are funded, particularly by the Commonwealth, that led to huge increases in funding for elite private schools, and a massive expansion in funding to the non-government education sector in general. But political willpower is never in plentiful supply. Email Share x Digg

The McCrindle Blog | McCrindle Research | Know the times Australia’s largest and most comprehensive census of retirement village residents, the bi-annual McCrindle Baynes Village Census 2013, profiled over 5,200 retirement village residents nationally to identify the decision drivers that motivate nearly 20,000 senior Australians to make the life-changing move to a village each year. Australia’s highest rated industry by customer rating: +25 score Incorporated in the research, set to be released today, is a measure of the Net Promoter Score (NPS), a methodology created by Bain & Company to rate the value perceived by customers of a product or service delivered by a corporation or industry. The most recent study of 19 Australian industries by Bain & Company delivered scores ranging from -44 (gas utilities) to +24 (online retail), with only 3 industries scoring a positive rating. This compares to the average Australian industry NPS which is -15. 2,200 Villages: One in every community Downageing retirees: Living longer, active later, enjoying life