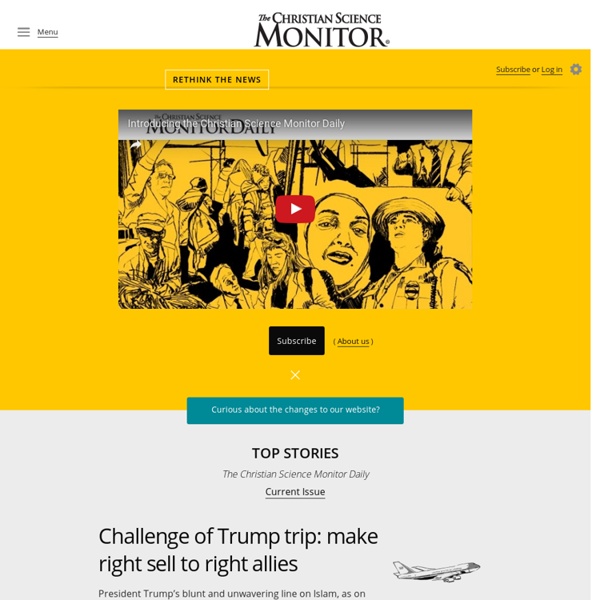 S. Philippines faces food insecurity after floods BANGKOK (AlertNet) - Recent flooding in the southern Philippines has affected half a million people and destroyed crops, raising concerns about food shortages in the coming months, the U.N. World Food Programme has said. The waters have now subsided considerably. Conspiracy Theorist conspiracy theorist » Bush and His Aides Made 935 False Statements about Iraq In the 2 Years After 9/11 Given the Republican obsession with Benghazi talking points, it’s time for a very specific flashback. Lively Lessons: Global News In this week’s Lively Lesson we highlight Global Stories and Global Wrap, revealing new ways to incorporate current events into the classroom. Both series can be used in a variety of ways and can be applied to numerous subjects areas. The programs are updated on a weekly basis, with new episodes available on My DE every Wednesday afternoon.

Institute for Advanced Studies In Culture: Publications - The Hedgehog Review Fall 2013 (15.3) Parenting in America has become the subject of vigorous debate among scholars, policy advocates, and parents themselves. Do parents truly want to be their children's best friends? Best of Russia on display The motto of the exhibit—“the main thing is not winning but participating”—is often seen as consolation for losers, but in the Best of Russia 2010 contest, this phrase is synonymous with success. An extremely large number of photos were eliminated in preliminary screening. The jury received 26,546 photos from across the country and had to select 365—the number of days in the year, so all the photographers who made the list are automatically winners. About - Serial On January 13, 1999, a girl named Hae Min Lee, a senior at Woodlawn High School in Baltimore County, Maryland, disappeared. A month later, her body turned up in a city park. She'd been strangled. Her 17-year-old ex-boyfriend, Adnan Syed, was arrested for the crime, and within a year, he was convicted and sentenced to spend the rest of his life in prison.

Twenty-five great ideas for teaching current events Looking for ways to work news into your classroom curriculum? Check out these great ideas for connecting current events to all subjects. Young Americans today know less and care less about what's going on in the world than young Americans of previous generations did. Those were the conclusions presented in a 1995 report from the Times Mirror Center for the People and the Press (now called the Pew Research Center for the People and the Press). "On average, only 20 percent of respondents aged 18 to 29 paid close attention to the stories covered in the News Interest Index [an index of top news stories]." Attentiveness rose to 23 percent among respondents 30 to 49 and to 29 percent among those 50 years and older.

5 Free Sites to Help Journalists Build an Online Portfolio Whether you’re a soon-to-be J-school graduate or a journalist looking for a new gig, one thing you will most certainly need is a good portfolio. And not just any portfolio — it has to be online. When a potential employer Googles your name, you want your website — complete with all your best articles, social media profiles, videos and other work — to be the first thing that shows up. An online portfolio is the new first impression and you want yours to be a strong one. Imagination > News Public demo versions of the IMAGINATION prototype are now available. Please try them at www.imagenotion.com and let us know what you think. 2009. September 14ICT Results reports on IMAGINATION 2009.