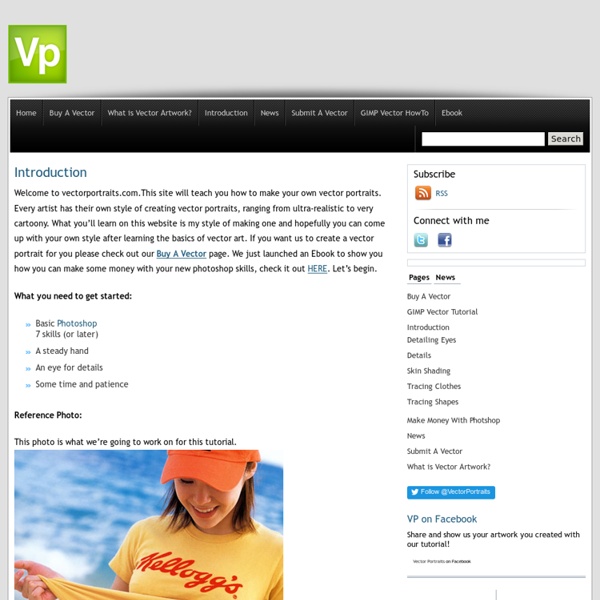 Welcome to vectorportraits.com.This site will teach you how to make your own vector portraits. Every artist has their own style of creating vector portraits, ranging from ultra-realistic to very cartoony. What you’ll learn on this website is my style of making one and hopefully you can come up with your own style after learning the basics of vector art. If you want us to create a vector portrait for you please check out our Buy A Vector page. We just launched an Ebook to show you how you can make some money with your new photoshop skills, check it out HERE. Let’s begin.

Photoshop Tutorial: Master Polygons Part 1 Download some of the tutorial files here Thanks go out to Ryan Barber for this tutorial. See more of his work at Step 1 The first phase involves tracing a series of triangles on top of a photograph, in Adobe Illustrator. Create a new file at 6.66 inches x 10 inches. Create a Dynamic Portrait with Flashy Light Effects Create a Dynamic Portrait with Flashy Light EffectsReviewed by Edmar Cisneros on Feb 16Rating: Preview of Final Results Download the PSD

The Making of Mystic In this tutorial Nik Ainley walks us through the process of making a spectacular image. This tutorial focuses on the big picture steps taken to create this image. You'll learn some incredible techniques in this tutorial, and get a view into how Nik creates beautiful photo-manipulation based images. Let's check it out. Introduction Hello everyone, before we get down to actually starting any Photoshop work I thought I would say a few words. Old School Type - Line Gradients One of our readers suggested we write a tutorial explaining how to do this cool text effect. On the Dragonforce logo above, the basis of my typography was sketched on paper first and then vectored in Illustrator using the Pen Tool. The process for creating the base logo is not included in this tutorial. Instead, we are going to take the base logo and add that cool “line gradient” effect that you see inside the actual letters. This gives the text an old-school or vintage feel to it. This look is prevalent in wood engraving and sign lettering.

Creating a Vector Composite Effect from a Photo This tutorial will demonstrate how to take an image, in this case a woman's face, and give the appearance that it is entirely composed of vector shapes. Along the way, we'll use some fairly basic techniques, including clipping masks and displacement maps, to achieve a unique effect! To begin, create a new document of pretty much whatever size you'd like. I personally prefer a wider look for this effect, but any size should work. You should, however, probably stick to a landscape aspect ratio, at least for following this tutorial. I chose an image size of 720 x 480 pixels at a resolution of 300 pixels per inch. Eye Sharpening - Photoshop Tutorial - 416 Studios With this tutorial you can create amazing, bright eyes within minutes. First retouch, adjust levels and do all necessary colour corrections on your image. With a Lasso Tool (L) select the eyes (hold Shift key to add to selection). Hit Ctrl+J to copy selection to a new layer.

How to Create Cool Light Effects in Photoshop « Abstract This tutorial is maybe another proof that I’m a light and color effects freak, I like them very much. So, In this tutorial I’ll show you more light and layer styles effects. You don’t need any special brushes for this tutorial. Everything is done using a few stock images and a few techniques already used on my previous tutorials. This is an advanced tutorial and you should know how to create a custom brush and how to apply layer styles. Art and Design News - Part 12 Wastebasket Basketball Published on May 31st, 2013 | by Ieva Kazakeviciute This will raise the accuracy at least twice around your office. (link)... Read More → Add Dynamic Lighting to a Flat Photograph In this tutorial, I will show you how to spice up a fairly dull and flat photograph. It's very easy and fast! Go from flat photo to a uniquely lit style. Editor's note: This tutorial was originally published on Psdtuts in March of 2008.

8 Cheat Sheet Wallpapers for Designers and Developers Web designers and developers have a lot to remember, from keyboard shortcuts to function names. That’s why it’s handy to have cheat sheets near by for a quick reference. Most people like to print out there cheat sheets on paper and have them sitting on their desk, but another convenient place for a cheat sheet is right on your computers desktop in the form of a wallpaper. Here we’ve rounded up a few very useful cheat sheets for web designers and developers that can be used as desktop wallpapers. Photoshop Keyboard Shortcuts Create Your Own Social Icon Stickers In this tutorial I will run you through some simple steps to create some social networking icon stickers you can use on a website or any other project you want to use them for. First download this crinkle paper texture Now open a new document 300X300px in photoshop Create a new layer and choose your ellipse shape tool. Now create a circle in the middle of the canvas any color you want. Now I am going to make it a bluish color, similar to the twitter color blue.

950+ Photoshop Tutorials To Keep Your Skillset Updated I know how much everyone loves tutorials, I know I love writing them too. Well in this post I have taken my time to roundup some Photoshop Tutorials and some Photoshop Roundups that I think is valid to be featured in this post. I know quite a few people are going to love me for this, but let’s keep it professional. If you think that I was kidding about the title, well then you’re making a mistake, there is really 1000 tutorials in this post. I hope you guys enjoy the post and the resources. Design a Brilliant Product Advertisement

Create a Stunning 3D Liquid Explosion Artwork 3D renders are often combined with vector elements and photostock elements to create stunning visual effects. While some artworks can be created merely in Photoshop, most designers are forced to call upon other programs in order to achieve truly brilliant effects. In this tutorial, you’ll learn how to create a Poser figure, create a shatter effect and render it in 3DStudio Max, then use Photoshop and some simple stock images to create a brilliant and visually stunning water explosion effect. Even if you don’t have Poser or 3DSMax, we’ve included the render in a PNG format for you to play with, and you’ll still learn valuable techniques. 25 Websites To Have Fun With Your photos - Photofunia There’re some really great sites out there that allows you to add effects to your photo by using their existing effect-templates. Here’s a collection of 25 Sites To Have Fun With Your Photos. 1.) PhotoFunia