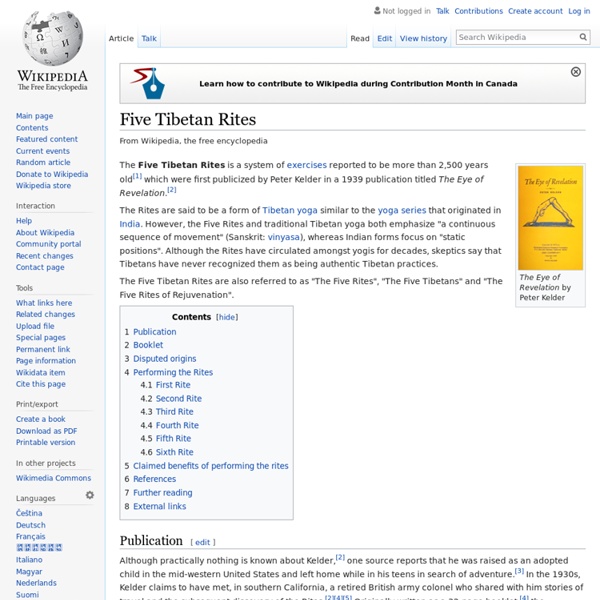 The Eye of Revelation by Peter Kelder The Five Tibetan Rites is a system of exercises reported to be more than 2,500 years old[1] which were first publicized by Peter Kelder in a 1939 publication titled The Eye of Revelation.[2] The Rites are said to be a form of Tibetan yoga similar to the yoga series that originated in India. However, the Five Rites and traditional Tibetan yoga both emphasize "a continuous sequence of movement" (Sanskrit: vinyasa), whereas Indian forms focus on "static positions". The Five Tibetan Rites are also referred to as "The Five Rites", "The Five Tibetans" and "The Five Rites of Rejuvenation". Publication[edit] Booklet[edit] In his booklet, Kelder claims that while stationed in India, British army officer Colonel Bradford (a pseudonym) heard a story about a group of lamas who had apparently discovered a "Fountain of Youth". Disputed origins[edit] Performing the Rites[edit] First Rite[edit] "Stand erect with arms outstretched, horizontal with the shoulders. Related:  Tibetian 5 Rites - 1+++ • intriguing

Five Tibetans Yoga Workshop: Tone Your Body and Transform Your Life Trade in your item Get a £2.22Gift Card. Flip to back Flip to front Listen Playing... See all 2 images Want it tomorrow, 5 May? <div> The Five Tibetans helps the reader to facilitate their inner work with the powerful combination of the body-strengthening daily practice of the legendary yoga-like poses known as the &#34;5 Tibetans&#34; along with spirit-nourishing stories and metaphors born of seas, rainbows and mountain vistas. £10.99 FREE Delivery in the UK. Special Offers and Product Promotions Frequently Bought Together No Kindle device required. Apple Android Windows Phone To get the free app, enter your e-mail address or mobile phone number. or What Other Items Do Customers Buy After Viewing This Item? Look for similar items by category

r/meditation Sound and the Chakras” - healingsounds.com Sound and the ChakrasBy Jonathan Goldman In 1980 I first began my study of the uses of sound and music as therapeutic and healing modalities. This study ultimately manifested with a Master’s Degree in Independent Study of the Uses of Sound and Music for Healing from Lesley University in Cambridge, Massachusetts. My initial investigation into the area of sound healing was the relationship between sound and the chakras. The word chakra is a Sanskrit term meaning “wheel”, for chakras are seen as spinning wheels of light by those with the ability to see subtle energy. The chakras are found in many traditions, including Hindu and Tibetan. There are seven main chakras. There is a feedback loop occurring with the energy of the chakras. There are seven main chakras, seven spinning balls of energy that are located centrally in the front and the posterior of the body. These are the seven main chakras found in the various traditions. There are numerous sound that seem to resonate the chakras.

The Meaning of the Pineal Gland The pineal gland, a pine-cone shaped gland of the endocrine system, is a highly essential part of the brain necessary to our survival. It is often associated with the third eye or the Ajna chakra, when activated, leads one to higher realms of consciousness. The third eye gives us perception of the universe around us through the five senses. Through our five senses we have self awareness and intelligence: sentience. As a chakra, the third eye, the pineal gland represents the point at which the body receives energy from the universe that keeps our lives sustained; the main access point between the astral body and the physical body. Its function in the brain is essential to our very consciousness. We use our perception, our consciousness and our senses to gain awareness of energy in our world via information around us. Melatonin is not only necessary for proper sleep, but it also regulates the onset of puberty and fight against harmful and free radicals. Resources:

Spirit guide "Spirit guide" is a term used by the Western tradition of Spiritualist Churches, mediums, and psychics to describe an entity that remains a disincarnate spirit in order to act as a guide or protector to a living incarnated human being. Traditionally, within the spiritualist churches, spirit guides were often stereotyped ethnically, with Native Americans, Chinese or Egyptians being popular for their perceived ancient wisdom. Other popular types of guides were saints or other enlightened individuals. Nevertheless, the term can also refer to totems, angels, guardian angels or nature spirits. Description[edit] According to theosophical doctrine, spirit guides are not always of human descent. Some early modern Spiritualists did not favor the idea of spirit guides. Firsthand Accounts[edit] Many well-known psychics have publicly described their guides. See also[edit] References[edit]

Five Tibetans: Five Dynamic Exercises for Health, Energy, and Personal Power Trade in your item Get a £0.34Gift Card. Flip to back Flip to front Listen Playing... Paused You're listening to a sample of the Audible audio edition. Learn more Want it tomorrow, 5 May? <div> Originating in the Himalayas, the five yogic exercises known as the Five Tibetans take very little time each day and minimal effort but dramatically increase physical strength, energy and suppleness as well as mental acuity. £8.99 FREE Delivery in the UK on orders with at least £10 of books. Special Offers and Product Promotions Frequently Bought Together No Kindle device required. Apple Android Windows Phone To get the free app, enter your e-mail address or mobile phone number. or What Other Items Do Customers Buy After Viewing This Item? Look for similar items by category

r/yoga Ani Williams - Songaia Sound Productions Chakra From an 1899 Yoga manuscript in the Braj Bhasa language. Their name derives from the Sanskrit word for "wheel" or "turning", but in the yogic context a better translation of the word is 'vortex or whirlpool'.[1][note 1] The concept of chakra features in tantric and yogic traditions of Hinduism and Buddhism. Etymology[edit] Sanskrit chakra derives from the Proto-Indo-European *kʷekʷlos; its cognates include Greek kuklos, Lithuanian kaklas, Tocharian B kokale, and English "wheel," as well as "circle" and "cycle".[2] M. "Circle," used in a variety of senses, symbolising endless rotation of shakti.A circle of people. The linguist Jorma Koivulehto wrote (2001) of the annual Finnish Kekri celebration, having borrowed the word from early Indo-Aryan Languages.[5] History[edit] Characteristics[edit] The texts and teachings present different numbers of chakras. "In fact, there is no "standard" system of the chakras. The following features are common: Use in religious traditions[edit] Hindu Tantra[edit]

Ananda yoga Ananda Yoga, or Ananda Yoga for Higher Awareness[1] is a system of Hatha Yoga established by Kriyananda, a disciple of Paramahansa Yogananda, and is based on his Kriya Yoga teachings. Ananda Yoga emphasizes inner awareness; energy control; and the experience of each asana as a natural expression of a higher state of consciousness, which is enhanced by the use of affirmations. History[edit] Ananda Yoga was established from one of the oldest Hatha Yoga systems in the West. Its roots are the 1940/1950ies, when Kriyananda was asked by Yogananda, founder of Self-Realization Fellowship (SRF), to demonstrate the postures for visiting guests, as well as for public events, such as the SRF "Lake Shrine Dedication." Kriyananda also modeled for photos, for articles on the yoga postures in Yogananda's "Self-Realization Magazine Principles[edit] Ananda Yoga uses asana and pranayama to awaken, experience, and control the subtle energies (prana) within oneself, especially the energies of the chakras.

Five Tibetan Rites slow aging increase energy improve breathing strengthen lower back core muscles Bodhisattva Quotes | We live in a world where we have to hide to make... - StumbleUpon Bodhisattva Quotes "At night I dream that you and I are two plants that grew together, roots entwined and that you know..." follow me → Newer Older <div id="about_container" style="display:block;border-top: 1px #000000 dashed;"><a name="me"></a><p class="avatar"><img alt="Bodhisattva Quotes"src=" /></p><p><script type="text/javascript"> var gaJsHost = (("https:" == document.location.protocol) ? Field Notes Theme.

30 Things to Stop Doing to Yourself When you stop chasing the wrong things you give the right things a chance to catch you. As Maria Robinson once said, “Nobody can go back and start a new beginning, but anyone can start today and make a new ending.” Nothing could be closer to the truth. But before you can begin this process of transformation you have to stop doing the things that have been holding you back. Here are some ideas to get you started: Stop spending time with the wrong people. – Life is too short to spend time with people who suck the happiness out of you. Update: Read our follow-up to this post: 30 Things to Start Doing for Yourself Photo by: Rob Brucker