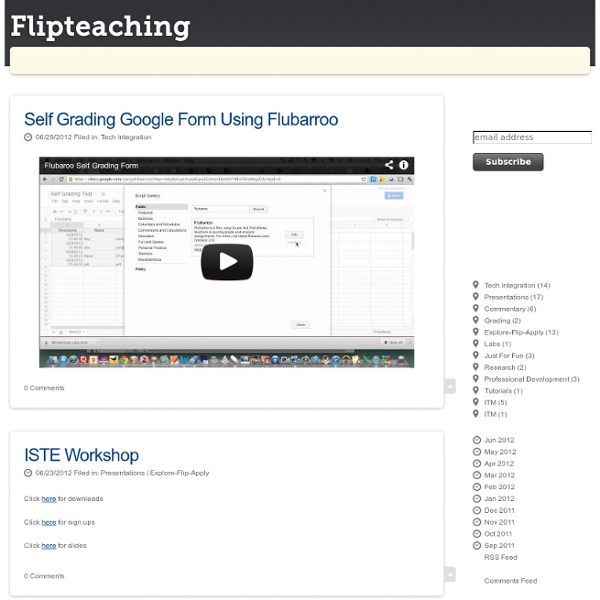 Literature Review « Kim_Bathker Educational Technology in a Flipped Classroom Setting Kim Bathker Introduction The rise of technology in the classroom opened up new doors for educators, who saw the potential for computer use and the incorporation of multimedia elements to engage and motivate students. The Flipped Classroom Model Though it was popularized by the much-publicized work of Bergmann, Sams and Khan, the flipped classroom model was first described by Baker in 2000. Though Lage, Platt, and Treglia (2000) coined the classroom model “inverted,” rather than flipped, their methodology was essentially the same as Baker’s (p. 32). Seven years after Baker’s and Lage, Platt and Treglia’s studies, high school chemistry teachers Bergmann and Sams teamed up to record their PowerPoint lecture presentations using screen capture software. Bergmann and Sams’s classroom experiment gained the attention of many in the education community, including Khan of the Khan Academy. Flipped Classrooms and Brain-based Learning Conclusion

Conversations and Observations - Every Single Student Had a conversation with one of my Math Analysis students yesterday about the flipped class. I guess one our other math teachers decided to have the students do a statistical analysis with some data this teacher got on the flipped classroom that "proved" it doesn't affect student achievement. Several of my students are co-enrolled in both courses, so of course those that prefer the traditional classroom took it as an opportunity to loudly share their opinions in that class, while the others just kind of sat there quietly. I don't really want to discuss that situation any further, but more so what came about because of it. Anyways, this student who told me about it is one who loves the flipped class, so it was an interesting conversation to have. We talked about one of the benefits of the flipped class in terms of use of class time. "Imagine I was teaching you about the Trig Functions today. I then asked him to take a glance around the classroom right then. A student-centered classroom.

Five Best Practices for the Flipped Classroom Ok, I'll be honest. I get very nervous when I hear education reformists and politicians tout how "incredible" the flipped-classroom model, or how it will "solve" many of the problems of education. It doesn't solve anything. It is a great first step in reframing the role of the teacher in the classroom. It fosters the "guide on the side" mentality and role, rather than that of the "sage of the stage." It also creates the opportunity for differentiated roles to meet the needs of students through a variety of instructional activities. 1) Need to Know How are you creating a need to know the content that is recorded? 2) Engaging Models One of the best way to create the "need to know" is to use a pedagogical model that demands this. 3) Technology What technology do you have to support the flipped classroom? 4) Reflection 5) Time and Place Do you have structures to support this? I know I may have "upset the apple cart" for those who love the flipped classroom.