Do These A.I.-Created Fake People Look Real to You? click 2x scroll down 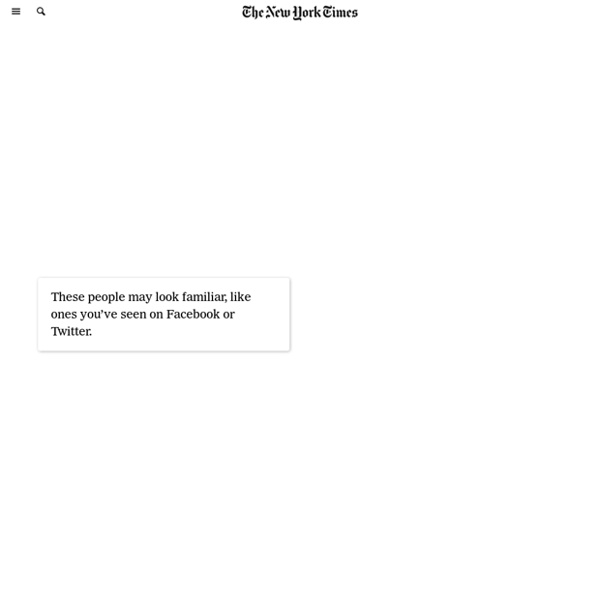 There are now businesses that sell fake people. On the website Generated.Photos, you can buy a “unique, worry-free” fake person for $2.99, or 1,000 people for $1,000. If you just need a couple of fake people — for characters in a video game, or to make your company website appear more diverse — you can get their photos for free on ThisPersonDoesNotExist.com. Adjust their likeness as needed; make them old or young or the ethnicity of your choosing. If you want your fake person animated, a company called Rosebud.AI can do that and can even make them talk. These simulated people are starting to show up around the internet, used as masks by real people with nefarious intent: spies who don an attractive face in an effort to infiltrate the intelligence community; right-wing propagandists who hide behind fake profiles, photo and all; online harassers who troll their targets with a friendly visage. We created our own A.I. system to understand how easy it is to generate different fake faces.

Meet Magawa, The Landmine-Detecting Rat Who Just Received The PSDA Gold Medal For Exceptional Bravery Not all animal superheroes wear capes, but they do get gold medals! Magawa, a landmine detection rat who has been saving lives in Cambodia, has been awarded the PDSA Gold Medal for his bravery and devotion to duty. Awarded by the UK’s leading veterinary charity, the People’s Dispensary for Sick Animals, this medal is the animal equivalent of the George Cross. HeroRAT Magawa (yes, that is his official job title) is the first rat in the charity’s 77-year history of honoring animals to receive a PDSA Medal. He joins the ranks of courageous dogs, brave horses, valorous pigeons, and an intrepid cat. Magawa is an African giant pouched rat who has been trained to detect landmines by charity APOPO.

Data reveal deadliness of COVID-19, even in young adults Even though all-cause mortality due to COVID-19 may not be known for a while, two new studies highlight that 173,300 (79.5%) of excess deaths from March through August were COVID related, with 4,535 deaths occurring from March through July in younger adults ages 25 to 44, or 38% of all excess deaths in that group. Data from the latter study helped inspire a New York Times editorial yesterday by the likely next director of the US Centers for Disease Control and Prevention (CDC) and her colleagues, who tried to dispel the myth that the disease is not deadly in younger adults. The first study, published in the Annals of Internal Medicine, found that almost 220,000 excess deaths occurred between March and August, even after adjusting for a growing and aging US population. As the Annals researchers write, though, "Estimating the true burden of COVID-19 will require continued monitoring of excess deaths by cause. Adjusting overall excess deaths in elderly downward

WTAF! How is Jonah Hill swearier than Samuel L Jackson? With the movie industry shut down due to coronavirus, now is a valuable time for us to look back and properly examine the attraction that we have to certain figures. Are we drawn to Tom Hanks because he exudes a sense of benevolent paternalism that we tend to find subconsciously appealing? Do we flock to Marvel films because we seek the clarity of a good-v-evil dynamic in a world where those are becoming increasingly opaque? And why do people go and see Jonah Hill films? Seriously, why? Fortunately, there is finally an answer to the latter.

'The Office' Warned Us - Dwight click 2x These are boom times for the lolsob. Watching the news, I sometimes find myself staring at the screen, eyes wide, brain broken, not sure whether to laugh or cry. The farce and tragedy tangle so tightly that it can be hard to tell where one ends and the other begins. William Cronon - The Trouble With Wilderness; or, Getting Back to the Wrong Nature by William Cronon Print-formatted version: PDF In William Cronon, ed., Uncommon Ground: Rethinking the Human Place in Nature, New York: W. W. Norton & Co., 1995, 69-90. The time has come to rethink wilderness.

Curses! Nicolas Cage to examine history of swearwords for Netflix Nicolas Cage is to host a six-part series for Netflix investigating the history of swearwords. Each episode with focus on a particular expletive: “fuck”, “shit”, “bitch”, “dick”, “pussy” and “damn”. The 20-minute shows are co-produced by Funny or Die and will feature celebrity guests, including Nick Offerman and Sarah Silverman, as well as linguists, cognitive scientists and lexicographers. Despite a reputation for advanced yelling, Cage is not one of the most sweary actors in Hollywood, failing to break into the top 10 in a study released earlier this year.

Forced Perspective Photography Transforms Action Figures Into Life-Sized Anything is possible through photography. While we’ve often admired the incredible photo manipulations created in programs like Photoshop, editing on the computer isn’t the only way to produce fantastical images. Using tricks like forced perspective can make things magically change in scale, transforming them into seemingly much larger or smaller versions of themselves. Wire Hon shows just how effective this technique can be with his forced perspective photography of action figures.

Why Earth's History Appears So Miraculous It was hard times for the bomber pilots that floated over Europe, their planes incinerating cities below, like birds of prey. Even as they turned the once-bustling streets beneath to howling firestorms, death had become a close companion to the crews of the Allied bombers as well. In fact, surviving a tour with the Bomber Command had become a virtual coin flip. While their munitions fell mutely from bomb bays, an upward sleet of fire from smoldering city grids and darkened farmland shot the planes out of the sky like clay pigeons. For recruits encountering the freshly empty bunk beds of dead airmen, morale was sapped before they could even get in the cockpit.

A Viral Theory Cited by Health Officials Draws Fire From Scientists As the coronavirus pandemic erupted this spring, two Stanford University professors — Dr. Jay Bhattacharya and Dr. Scott W. Atlas — bonded over a shared concern that lockdowns were creating economic and societal devastation. Now Dr. Atlas is President Trump’s pandemic adviser, a powerful voice inside the White House. Trump the Merovingian – BLARB By Sara Lipton President Trump’s recently completed overseas tour has left pundits struggling to explain his surprising affinity for the pre-modern Saudi Arabian monarchy. This hardly seems the attitude of a populist, a Christian conservative, or an ethnic nationalist, to mention just three of the labels that have been applied to him. Rather, the president’s preferences suggest that we should look further back than the 20th century to understand his political style and impulses.

50 Times Architects Really Outdid Themselves And People Celebrated Their Works Online Architecture is meant to fulfill both practical and expressive requirements, and thus it serves both utilitarian and aesthetic purposes. When you look at a structure, you can distinguish these two ends but they cannot be separated, and the relative weight each of them carry can vary widely. Plus, every society has its own, unique relationship to the natural world and its architecture usually reflects that as well, allowing people from other places to learn about their environment, as well as history, ceremonies, artistic sensibility, and many aspects of daily life.

Why Social Media Makes Us More Polarized and How to Fix It Every time I log onto Facebook, I brace myself. My newsfeed—like everyone else’s I know—is filled with friends, relatives and acquaintances arguing about COVID-19, masks and Trump. Facebook has become a battleground among partisan “echo chambers.” But what is it about social media that makes people so polarized? To find out, my colleagues and I ran a social media experiment in which we divided Democrats and Republicans into “echo chambers,” or small groups whose members affiliate with just one political party.