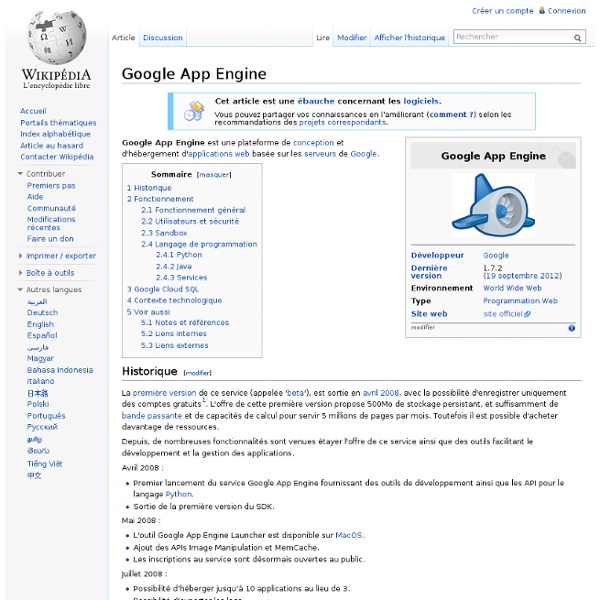 Develop in the cloud with eXo’s Cloud IDE Today’s post comes from Mark Downey of eXo, creator of Cloud IDE. Cloud IDE is an online IDE for Java, Python, PHP, Ruby or Javascript, and for nearly two years it has been used by developers to build applications for a number of PaaS environments. They recently added support for deploying code to Google App Engine. Since eXo started the Cloud IDE project back in 2010, our objective has been to make developers more productive in building and deploying cloud-based apps. It’s easy to get started. This opens the App Engine admin console in a new browser tab, where you get to choose your app ID (which will define the URL of your application). In Java, you can use auto-completion (alt+space) and have access to all the Google App Engine libraries. The Google App Engine menu also enables you to view and update your App Engine services such as Indexes, PageSpeed, Queues, DoS, Resource Limits, Crons or Backends. - Contributed by Mark Downey, product manager for eXo Cloud Services @marksdowney

Search Overview (Python) - Google App Engine The Search API provides a model for indexing documents that contain structured data. You can search an index, and organize and present search results. The API supports partial text matching on string fields. Note: The Search API is available only to applications using the High Replication Datastore (HRD). Overview The Search API is based on four main concepts: documents, indexes, queries, and results. Documents A document is an object with a unique ID and a list of fields containing user data. Atom Field - an indivisible character stringText Field - a plain text string that can be searched word by wordHTML Field - a string that contains HTML markup tags, only the text outside the markup tags can be searchedNumber Field - a floating point number Date Field - a date object with year/month/day and optional timeGeopoint Field - a data object with latitude and longitude coordinates The maximum size of a document is 1 MB. Indexes An index stores documents for retrieval. Queries Search results

Tech Blog » Develop and deploy Applications using Google App Engine : Tutorial About two years back Google launched a platform that enabled developers to develop and host web applications in Google’s web server. Though Google has offered many APIs for the ease of the programmers, many are reluctant to release their apps in Google’s web sphere. Recently I was talking to a web developer about this and he told me that the interface offered by Google is some what obscure. Well, that is not true. This edition of techblog carries a tutorial which will show you how to develop and deploy their applications in Google’s servers. Since my usual ID is already registered with the service, I will use another google email id to show you the procedures. First of all you need to visit the app engine site and sign in using your email id and password. Once you have done that you will be redirected to a welcome page which will also have a button – ‘Create an Application’ (See the picture below) Click on the button. Now you are a verified user and you can create an application. print x

Using Google App Engine to Extend Yahoo! Pipes | java rants Update: A commenter pointed out that you can from django.utils import simplejson instead of including it. Makes this even easier. Yahoo! With the launch of Google App Engine there is now a very simple way to get code up on the internet quickly in order to include arbitrary processing in the interior of your Pipes. To demonstrate how this works, let’s first build a very simple web service that simply mirrors the data that it receives from Pipes. First create a new application directory: mkdir pipes-mirror cd pipes-mirror Now create an application descriptor called app.yaml: application: javarants version: 1 runtime: python api_version: 1 handlers: - url: /.* script: pipes.py This application descriptor basically tells Google how to deploy your application. Now we need to process the data coming from pipes. Now you should have a directory structure that looks a lot like this: Now that we have all the pieces we can deploy the application to GAE with a simple command from the GAE SDK:

Blog » How to create a simple but powerful CDN with Google App Engine (GAE) The main purpose when I started to look at Google App Engine (3 days ago) was to use it as a “CDN for the rest of us”, a way to cache static content (initially) and have this content distributed along all the infrastructure of Google (maybe the most powerful cloud rigth now) What we want?: Create a CDN easy to update and free of charge for static resources (images, css, js)Consume as less bandwidth as possible leveraging the If-Modified-Since/Last-Modified/304 Not Modified model Hands-on: The first approach, of course, was to look on Google for some help, the post of Andreas Krohn helped a lot to start. But I want to go further and take care of modern browsers If-Modified-Since requests, then the google framework and a little of Python comes to the rescue. Note: I’m assuming you’ve already installed the Python environment and the Google App Engine SDK First of all let me give you two little .bat files that are useful: Start the test webserver (test.bat):dev_appserver.py c:\ipsojobscloud

Google App Engine Gets Some Needed Upgrades - ReadWriteCloud Google App Engine has received some needed upgrades to its service that customers have been asking for over the past several months. The issues came to a head last week after a developer posted 13 reasons why he and his group decided to drop Google Apps. Some questioned the developer's execution but overall many of the issues have also been noted in the Google Apps discussion boards. Customers have been asking for such things as an increase in the amount of data that can be uploaded in a URL Fetch and an increase in the 30 second limits to upload data. In conversations yesterday, the Google App Engine team said the URL Fetch has been increased from one megabyte to 30 megabytes of data. Detailed infrastructure upgrades have been needed to make the upgrades. Added Features Google has also added new features for the platform. Road Map Over the next few months, Google will add MapReduce to Google App Engine. Here's a list of what's to come: Google App Engine needed these improvements.