The Emerald Tablets of Thoth the Atlantean 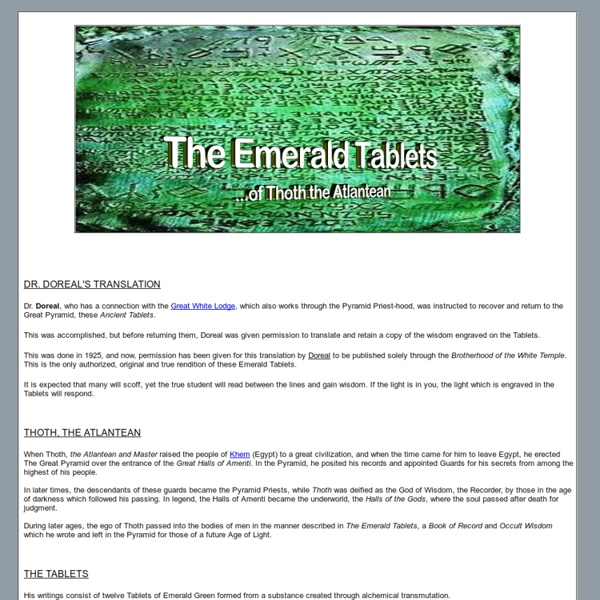 Dr. Doreal, who has a connection with the Great White Lodge, which also works through the Pyramid Priest-hood, was instructed to recover and return to the Great Pyramid, these Ancient Tablets. This was accomplished, but before returning them, Doreal was given permission to translate and retain a copy of the wisdom engraved on the Tablets. This was done in 1925, and now, permission has been given for this translation by Doreal to be published solely through the Brotherhood of the White Temple. It is expected that many will scoff, yet the true student will read between the lines and gain wisdom. When Thoth, the Atlantean and Master raised the people of Khem (Egypt) to a great civilization, and when the time came for him to leave Egypt, he erected The Great Pyramid over the entrance of the Great Halls of Amenti. His writings consist of twelve Tablets of Emerald Green formed from a substance created through alchemical transmutation. Dr. Translation & Interpretation by Doreal

TIS |  Intro To Curriculum Welcome to the TRUTH IS SCARY “Curriculum”…your gateway to the “Rabbit Hole”. Whether you are a new or experienced Truth Seeker, the Curriculum is meant to increase your Awareness of the Truth that exists behind the Stories that you have been told your entire life. The Curriculum is designed to stimulate your Left Brain and open up your Mind to the many versions of the Truth that exist in the Universe. Within these pages you will find short videos, full length documentaries, and Articles separated into over 20 distinct Categories that were purposely placed in a specific order. Dig deep within the Curriculum and you will find a wide range of different viewpoints on The Creation of Man, UFO’s, and Celebrity Assassinations to Nutrition, Meditation, and Yoga. There are many paths to the Truth, our purpose is not to tell you what Truth is, but to show you the many options that exist and let you decide your Truth for yourself. Topics covered in the TIS Curriculum:

Vibrant Vital Water® - Water Education Despite the fact that many technologically advanced countries have stopped or banned the use of fluoride in water, the U.S. and Canada continue to promote water fluoridation. Fluoride (in the form of sodium fluoride, fluorosilicic acid, or sodium fluorosilicate) is added to many municipal water systems. Yet according to a growing number of scientific studies, fluoride is a health risk at any level. In January 2011, Health and Human Services and the Environmental Protection Agency announced their intent to review the maximum allowable amount of fluoride in drinking water. *Dental fluorosis is a defect in the enamel of the teeth caused by too much fluoride. Most fluoride that is added to municipal water is an unnatural form of fluoride that contains sodium. The fluoride ion (F-) is extremely reactive and strongly attracted to calcium. According to the National Academy of Sciences, fluoride is not an essential nutrient and no amount of fluoride is necessary in the human body. 1.

A Hyper-History of the Emerald Tablet The Emerald Tablet The Emerald Tablet is one of the most revered documents in the Western World, and its Egyptian author, Hermes Trismegistus, has become synonymous with ancient wisdom. His tablet contains an extremely succinct summary of what Aldous Huxley dubbed the "Perennial Philosophy," a timeless science of soul that keeps popping up despite centuries of effort to suppress it. The teachings of Hermes -- the Hermetic tradition -- is one of the oldest spiritual traditions in the world, and while no direct evidence links the Emerald Tablet to Eastern religions, it shares uncanny similarities in concepts and terminology with Taoism, Hinduism, and Buddhism. Without doubt, the Emerald Tablet was the inspiration behind many other esoteric traditions, including over 1,700 years of alchemy. Five hundred years later, the tablet's words are still held in the highest regard. Timeless Myths and Church Politics Thrice Greatest Hermes Thoth: the First Hermes Akhenaten: the Second Hermes

Emerald Tablets Of Thoth, 50,000 Year Old Tablets Reportedly From Atlantis | Watercooler Topics (Before It's News) The Tablets of Thoth are imperishable, resistant to all elements, corrosion and acids. In effect, the atomic and cellular structure is fixed, and no change can take place, thus violating the material law of ionization, according to Bibliotecapleyades. Upon them are engraved characters in the Ancient Atlantean language; characters which respond to the attuned thought waves of the reader and which release much more wisdom and information than the characters do when merely deciphered. Dr. When Thoth, the Atlantean and Master raised the people of Khem (Egypt) to a great civilization, and when the time came for him to leave Egypt, he erected The Great Pyramid over the entrance of the Great Halls of Amenti. In later times, the descendants of these guards became the Pyramid Priests, while Thoth was deified as the God of Wisdom, the Recorder, by those in the age of darkness which followed his passing. Credit: Lou Bernedetto· Translation and Interpretation by Doreal Dr. Dr.

The Emerald Tablet: Time Capsule of Wisdom from Mankind's Unknown Benefactors. What Is the Emerald Tablet? The Emerald Tablet is an ancient artifact that reveals a profound spiritual technology, which has survived to this day despite centuries of effort to suppress it. Encoded within the tablet's mysterious wording is a powerful formula that works in very specific and comprehensible steps on all levels of reality at once -- the physical, the mental, and the spiritual -- and shows us how to achieve personal transformation and even accelerate the evolution of our species. Molded out of a single piece of green crystal, the Emerald Tablet carries a prophetic message full of hidden meaning. Working only with these early translations, many seekers of truth recognized in subsequent centuries that the Emerald Tablet contained a secret formula for transforming reality. As we enter the third millennium, the ancient formula is resurfacing in what people perceive as mystical or paranormal events. English translation of the Emerald Tablet

Steven J. Smith Steven J. Smith [2010 Oct EW] Steven J. Quotes How Orgonite Works. DECEPTIONS, COVER-UPS & CONSPIRACIES[source] Reach out and touch someone Remote Mind Control. The masters of magicFunding Covert Government Projects. The missing 40 trillion dollars Underground Infrastructure. A weapon of selective destruction Atmospheric Lensing. Diplomacy by other means Synthetic Earthquakes. The final flight of TWA 800Introduction & Overview: Brookhaven-Montauk-Shoreham. National Security Agency National Security Agency (NSA) - Part 1. SCIENTIFIC PAPERS OF STEVEN J. The mathematics of physics, or Of oranges, nukes, and virgins Dimensional Analysis - Part 1. The Economics of Energy, or The Demise of Petroleum Anatomy of a Market Collapse, The Demise of Petroleum by Steven J. The Physics of Health, or The legacy of Rife Bio-Molecular Resonance Generator (BMRG). The Physics of Space/Time, or The complexity of nothing Electrodynamic Structure of Space - Part 1.

My State Of Mind by viewzone's editor Gary Vey "The god himself was a statue. The statue was not of a god (as we would say) but the god himself." -- Julian Jaynes 5,000 Years Ago: Writing is developed The bicameral (hallucinated) voice provided morality, intuition and survival skills. Despite some really harsh times, the guidance of the voice was sufficient enough to allow humanity to survive until today. Through ice ages, changing climates, famines, droughts, migrations and diseases, the bicameral voice was a good shepherd to humanity. Controlled by a common voice, larger groups of diverse humans began to live and cooperate together. All of the great Mesopotamian civilizations used cuneiform (the Sumerians, Akkadians, Babylonians, Elamites, Hatti, Hittites, Assyrians, Hurrians and others) until it was abandoned in favor of the alphabetic script at some point after 100 BCE. Archaeologists have uncovered thousands of clay tablets containing cuneiform texts from different eras. Noticeably missing in these votives are personal requests.

The Emerald Tablet, also known as Smaragdine Table, Tabula Smaragdina, or The Secret of Hermes by ouren7 Aug 22