Black Freedom Struggle in the United States:​ A Selection of Primary Sources 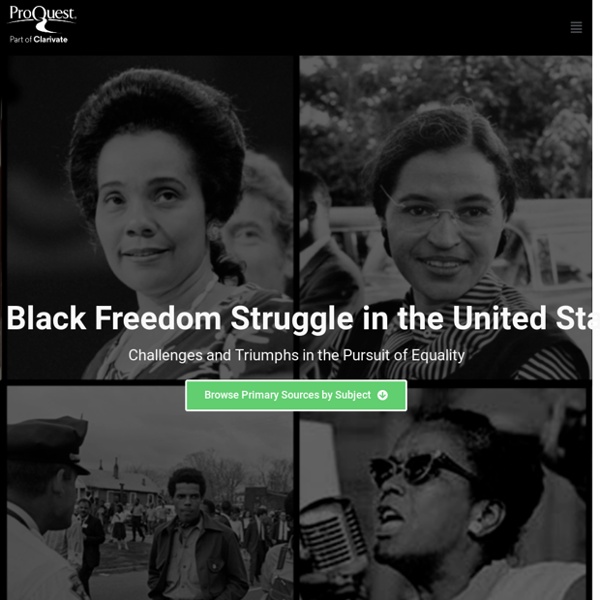 Related:  USA's historie • Where to find information - US History

Immigration Timeline - The Statue of Liberty & Ellis Island By the 1880's, steam power had shortened the journey to America dramatically. Immigrants poured in from around the world: from the Middle East, the Mediterranean, Southern and Eastern Europe, and down from Canada. The door was wide open for Europeans. The African-American Migration Experience - Sources For enhanced functionality view Flash version of this site New societies, new peoples, and new communities usually originate in acts of migration. Someone or ones decide to move from one place to another. SoJust.net: Social Justice and Civil Rights Speeches Bella AbzugPlenary Address, Fourth World Congress on Women (1995) John AdamsInaugural Address (1797) Jane AddamsThe Subjective Necessity for Social Settlements (1892)The Modern Lear (1896) Susan B.

Making of America - Digital Library of Primary Sources on American History aking of America (MoA) is a digital library of primary sources in American social history from the antebellum period through reconstruction. The collection is particularly strong in the subject areas of education, psychology, American history, sociology, religion, and science and technology. The collection currently contains approximately 10,000 books and 50,000 journal articles with 19th century imprints. For more details about the project, see About MoA. Making of America is made possible by a grant from the Andrew W. Religion and the Founding of the American Republic This exhibition demonstrates that many of the colonies that in 1776 became the United States of America were settled by men and women of deep religious convictions who in the seventeenth century crossed the Atlantic Ocean to practice their faith freely. That the religious intensity of the original settlers would diminish to some extent over time was perhaps to be expected, but new waves of eighteenth century immigrants brought their own religious fervor across the Atlantic and the nation's first major religious revival in the middle of the eighteenth century injected new vigor into American religion. The result was that a religious people rose in rebellion against Great Britain in 1776, and that most American statesmen, when they began to form new governments at the state and national levels, shared the convictions of most of their constituents that religion was, to quote Alexis de Tocqueville's observation, indispensable to the maintenance of republican institutions.

Many Pasts Many Pasts This feature contains primary documents in text, image, and audio about the experiences of ordinary Americans throughout U.S. history. All of the documents have been screened by professional historians and are accompanied by annotations that address their larger historical significance and context. The African American Odyssey: A Quest for Full Citizenship The exhibition The African American Odyssey: A Quest for Full Citizenship, showcases the incomparable African American collections of the Library of Congress. Displaying more than 240 items, including books, government documents, manuscripts, maps, musical scores, plays, films, and recordings, this is the largest black history exhibit ever held at the Library, and the first exhibition of any kind to feature presentations in all three of the Library's buildings. The major presentation in the Jefferson Building, The African American Odyssey: A Quest for Full Citizenship, explored black America's quest for equality from the early national period through the twentieth century. The items in this exhibit attest to the drama and achievement of this remarkable story.

Voices Remembering Slavery: Freed People Tell Their Stories  The recordings of former slaves in Voices Remembering Slavery: Freed People Tell Their Stories took place between 1932 and 1975 in nine states. Twenty-three interviewees discuss how they felt about slavery, slaveholders, coercion of slaves, their families, and freedom. Several individuals sing songs, many of which were learned during the time of their enslavement. It is important to note that all of the interviewees spoke sixty or more years after the end of their enslavement, and it is their full lives that are reflected in these recordings.

Related:
Related:  USA's historie   -  Where to find information - US History