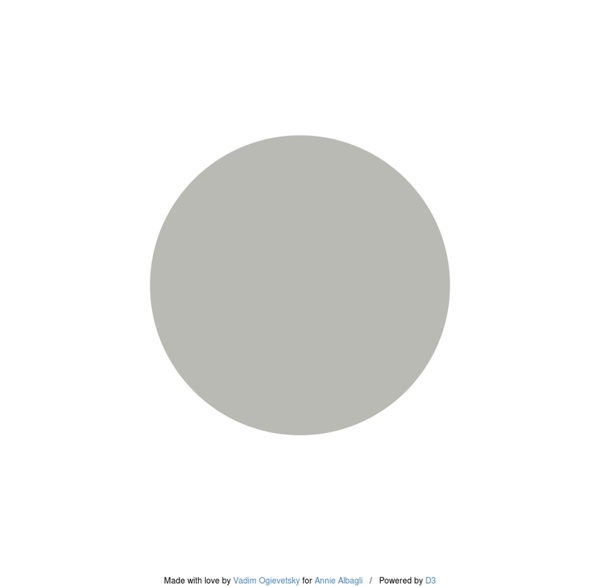 Bill Domonkos This is a collection of stereo prints by Bill Domonkos that combine found vintage stereograms and 3Dcomputer graphics. You can view these images in 3D by using the Free-Vision Fusion (Cross-Eyed) Method. 1. The "World's Largest" Stop Motion Animation Was Created With A Nokia N8 Less than a year after making the world’s smallest animation, Nokia just ticked off that large, lurking item on the to-do list: conjuring the world’s largest stop motion animation. The new film, Gulp, tells the simple story of a fisherman who gets swallowed by a larger predator. It was shot entirely with the Nokia N8 phone. “Strapping the device to a 40-meter high cherry picker on a massive expanse of beach with gale force winds seemed like a good challenge for the smartphone,” says David Bruno, a creative at Wieden + Kennedy London which created the spot along with directing team Sumo Science, from animation studio Aardman, and sand artist Jamie Wardley, from sand and ice sculpture specialists, Sand in Your Eye. Sumo Science, aka Ed Patterson and Will Studd, director of photography Toby Howell and Wardley, literally fought time and tides over the five-day shoot to complete the painstaking animation process before the sea wiped out their efforts. Watch the Making of Gulp below.

Check out my cool home design on Autodesk Homestyler! © 2013 Autodesk, Inc. All rights reserved. Use of the service is subject to the Homestyler Terms of Use. Trademarks Brandalism: Street artists hijack billboards for 'subvertising campaign' - Features - Art Among your comments were: “I love an intelligent response to advertising. Who asked the public if we want our faces filled with adverts as we walk the streets?” and “Hooray! More of this. Everyone should start doing this to adverts”. The relatively unknown artist responsible, Robert Montgomery from Scotland, seems to have struck a chord with readers.

New Virtual Library Offers over 250 Art Books for Free Download Publications, Research Getty Publications makes 45 years of art and conservation titles available online, with more to come When we launched the Open Content Program last summer and released 4,600 collection images to the public (a number that has since more than doubled), I cited this quote from the most recent museum edition of the NMC Horizon Report: “it is now the mark—and social responsibility—of world-class institutions to develop and share free cultural and educational resources.” This dictum continues to inform our efforts here at the Getty, and today I am very pleased to share with you our latest project in this arena, the Virtual Library: An open, online repository of more than 250 Getty publications from our 45-year publishing history, available as high-quality scans to read online, or to download in their entirety, for free. The books in the Virtual Library come from three of the Getty’s programs: the Getty Conservation Institute, the Getty Research Institute, and the J.

Nike releases famed "Back to the Future" shoe PORTLAND, Ore. (AP) -- Nike is going back to the future.The sneaker maker on Thursday said it has created a limited-edition shoe based on a glowing pair that appeared in the popular 1989 movie "Back to the Future II." The 2011 Nike Mag is designed to be an exact replica of the fictional sneaker, including a glowing Nike name on the strap. But unlike the movie version, these shoes won't lace themselves.Nike will release 1,500 pairs of the 2011 Nike Mag sneaker for auction on eBay and donate all proceeds to the Michael J. Fox Foundation for Parkinson's disease research. Fox famously played Marty McFly in the "Back to the Future" time-travel trilogy, where he wore the shoes during a visit to the year 2015."

This Anamorphic Portrait by Bernard Pras is Made From an Entire Room of Objects French artist Bernard Pras works almost entirely within the realm of assemblage and anamorposis, a visual illusion where a distorted projection—often made from paint or a collection or objects—must be viewed from a specific vantage point to reconstitute the intended image. His latest piece, a portrait of Malian actor Sotigui Kouyaté, is comprised of numerous objects including clothes, paint, wood, rubber, and other objects found or scavenged around the installation site. Only when viewed through the lens of his camera is the image clearly visible. Watch the video above to see everything come together. Pras currently has a solo show at MazelGalerie in Brussels, Belgium and you can see a collection of his work here (flash).

Random Chicken Facts Random Chicken Facts The average hen lays 300 eggs a year. The record for multiple egg yolks in one egg is nine. A chicken needs to eat approximately four pounds of feed to make a dozen eggs (about 86 cents worth of food at retail). If a chicken has red ear lobes, it will lay brown eggs if it has white earlobes it will lay white eggs. Chickens will lay fewer and fewer but larger and larger eggs as they grow older.