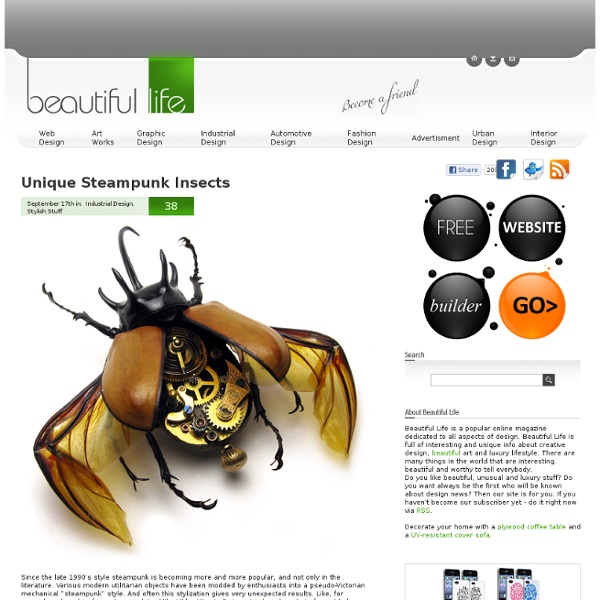 Since the late 1990′s style steampunk is becoming more and more popular, and not only in the literature. Various modern utilitarian objects have been modded by enthusiasts into a pseudo-Victorian mechanical “steampunk” style. And often this stylization gives very unexpected results. Like, for example, art works of american sculptor Mike Libby. His studio Insect Lab make robots from dried insects. Insects for his works come from around the world, from Africa, China, New Guinea, Brazil, Texas, etc.

San Diego Automotive Museum San Diego Automotive Museum Presents… Steampunk – the Automotive Museum’s version of the literary and artistic genre. The Museum has collaborated with local artists, Starburner Galactic Courier Service, to interpret this growing art form through automotive design and technology. Several vehicles built in Steampunk style will be on exhibit including a few of the Museum’s own vehicles modified in the Steampunk genre by our local ‘makers’. In addition, numerous art objects will be on view from clothing and everyday functional pieces, to graphic art and the music of the genre.

Kim Yong Soo I was delighted to stumble onto the work of Korean artist Kim Yong Soo whose artwork, at first glance, takes on the somewhat familiar appearance of traditional Japanese paintings of cherry tree bossoms. Closer inspection reveals a textured assemblage of semi-conductors, speaker wires, and acrylic cement, used to form the delicate tree branches, flowers, and ominous humanoid figures that bring an unexpectedly dark presence to these otherwise serene paintings. 50 Ceiling Design Ideas complex mirror structure on a ceiling is a really unqiue desing solution for any room A lot of people prefer simple flat white ceilings. Sometimes that’s because of neglecting the possibility of ceiling design while other times that’s because of they think that’s the best solution. Even though I think white ceilings are awesome there are also other very cool ways to design them. Whether it’s a bedroom, a kitchen or even a bathroom, a cool and creative ceiling design could give this room a unique look and impress all people who visit it.

Melted Crayon Art Perhaps I should begin this post by introducing you to my mom, also known as Her Ladyship Craftiness…er, Her Royal Craftiness? I’m still working on the title. Regardless, she’s the coolest, most creative and talented woman I know. She can make pretty much anything. At least once during high school, I borrowed a friend’s purse, brought it home to Mom, and she whipped one up just like it for me. Steam Punk "Imagine it... The Victorian Age accelerated. Starships and missiles, fueled by coal and driven by steam. Leaving history devastated in its wake." Retro-style Speculative Fiction set in periods where steam power is king. Very often this will be in an Alternate Universe where the internal combustion engine never displaced the steam engine, and as a result all manner of cool steam-driven technologies have emerged, ranging from Airships to submarines; the plausible counterpart to Magitek, with a Hollywood ScienceHand Wave or The Spark of Genius.

Beyond Drawing: Creative Colored Pencil Art & Sculpture & Dornob - StumbleUpon From a very first look at these wonderfully detailed colored pencil sculptures by Jennifer Maestre, it should come as no surprise that her artwork was initially inspired by spiny sea urchins – beautiful be dangerous to the touch. For each sculpture, Jennifer hacks apart hundreds of colored pencils, cores them perpendicular to their length and turns them into beads, essentially, which she then meticulously stitches back together and slowly shapes into solid sculptures. Though her beginnings were with creatures of the water, Jennifer quickly expanded her subject matter to cover other organic objects – from plants and flowers to house pets and more abstract animals. While some of her work has a planned form from the very beginning, other pieces morph and shift as they take shape into something completely unplanned but nonetheless compelling.

Filmmaking on a Budget: Top Five Camcorders Under $2000 In many ways there has never been a better time for amateur filmmakers to go out and purchase new equipment. The rise of HD video has brought forth a wave of new products: from high-performance camcorders that sell for under $1000, to hands-free adventure cams that let you capture all the action for just a couple hundred bucks. And lets not forget all those video-capable DSLRs that offer the flexibility of interchangeable lens systems at lower costs than ever before. So, if you're on the prowl for new video equipment, let us help you out for a moment. Here's our list for the top five camcorders for the budget filmmaker, with all of these models costing less than $2000.

Silk-Dyed Eggs {aka TIE-Dyed!} I posted this tutorial a few years ago and it has become somewhat of a tradition to bring it back every year! One of our family Easter traditions is dying eggs with pieces of silk. I saw a cute lady show Martha how to do it a few years ago and I ran upstairs right then to steal a tie!