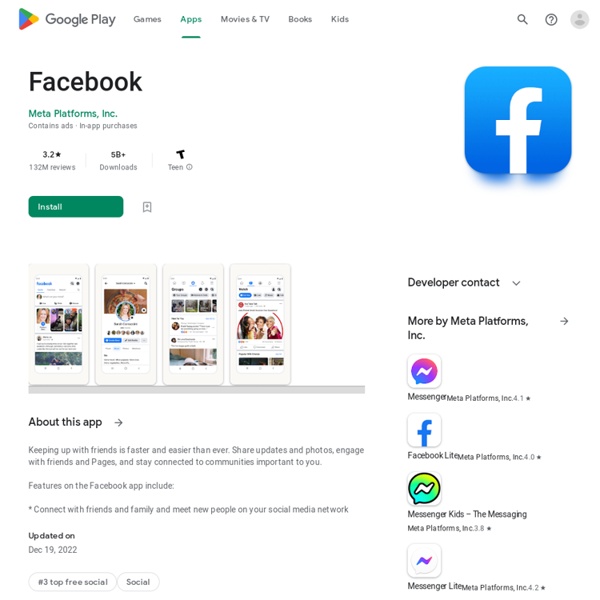 Keeping up with friends is faster and easier than ever. Share updates and photos, engage with friends and Pages, and stay connected to communities important to you. Features on the Facebook app include: * Connect with friends and family and meet new people on your social media network* Set status updates & use Facebook emoji to help relay what’s going on in your world* Share photos, videos, and your favorite memories.* Get notifications when friends like and comment on your posts* Find local social events, and make plans to meet up with friends* Play games with any of your Facebook friends* Backup photos by saving them in albums* Follow your favorite artists, websites, and companies to get their latest news* Look up local businesses to see reviews, operation hours, and pictures* Buy and sell locally on Facebook Marketplace* Watch live videos on the go The Facebook app does more than help you stay connected with your friends and interests.

‎Twitter on the App Store Join the conversation! Retweet, chime in on a thread, go viral, or just scroll through the Twitter timeline to stay on top of what everyone’s talking about. Twitter is your go-to social media app and the new media source for what's happening in the world, straight from the accounts of the influential people who affect your world day-to-day. Explore what’s trending in the media, or get to know thought-leaders in the topics that matter to you; whether your interests range from #Kpop Twitter to politics, news or sports, you can follow & speak directly to influencers or your friends alike. Every voice can impact the world. Follow your interests.

‎Instagram on the App Store Honestly, who cares about new updates on Instagram? Just because people get attached to easily does not mean that Instagram is not allowed to change. What I am concerned for is that it has become so incredibly fake. Everyone who posts on Instagram, posts their best pictures of themselves or posts to make money. Bing Search Tips and Tricks to improve Search Experience Bing is the second-best search engine around, and if you use it, here are some of the best tips and tricks you need to know when using Bing Search. If you are wondering why to talk about it when it is not close to Google, then it’s because there are people who still use it. Microsoft offers rewards to people who use Bing Search, and that’s one more reason it is also used. So let’s get to know how you can better use Bing Search. These are some of the excellent tips and tricks you can try with Bing Search. Bing Operator SearchSite SearchFile Type SearchLocation Specific SearchCurrency ConverterWeather ForecastSearch in Title, Anchor, and body of the pageChange Size of Images in the searchFocus on a certain area in searchReverse Image Search.

‎Academia.edu on the App Store I’ve used academia for a good few months now and have enjoyed it. However, recently, I’ve run into a key issue that pretty much hamstrings it. Any time I try to actually read an article, the article’s text simply doesn’t load. The “About” and “Related” sections load near instantly, but the “Read” section, the actual text of the article I’m wanting to use, never does. I could understand if it were a matter of these articles being paywalled like some results on the app are (even if I find paywalling content when features are already paywalled disagreeable, but that’s a minor issue), but there’s no prompt alerting me to needing to be a premium member or the like, just an infinite loading screen.

ZOOM Cloud Meetings - Apps on Google Play Stay connected wherever you go – start or join a secure meeting with flawless video and audio, instant screen sharing, and cross-platform instant messaging - for free! Zoom is #1 in customer satisfaction and the best unified communication experience on mobile. It's super easy! Install the free Zoom app, click on "New Meeting," and invite up to 100 people to join you on video! Connect with anyone on Android based phones and tablets, other mobile devices, Windows, Mac, Zoom Rooms, H.323/SIP room systems, and telephones. VIDEO MEETINGS FROM ANYWHERE-Best video meeting quality-Easily join a meeting or start an instant meeting with phone, email, or company contacts Blog Discussion or informational site published on the World Wide Web The emergence and growth of blogs in the late 1990s coincided with the advent of web publishing tools that facilitated the posting of content by non-technical users who did not have much experience with HTML or computer programming. Previously, a knowledge of such technologies as HTML and File Transfer Protocol had been required to publish content on the Web, and early Web users therefore tended to be hackers and computer enthusiasts. In the 2010s, the majority are interactive Web 2.0 websites, allowing visitors to leave online comments, and it is this interactivity that distinguishes them from other static websites.[2] In that sense, blogging can be seen as a form of social networking service.

Extension:eduWIKI I am moving eduWIKI from Google Code to my own repository. eduWIKI is an educational-based wiki based off of MediaWiki. It is a MediaWiki modification for education. eduWIKI exists in two forms: Standalone installation (eduWIKI), and as a MediaWiki extension (edupak), however, edupak has been deprecated.

‎WhatsApp Messenger on the App Store Simple. Reliable. Secure. — WhatsApp from Facebook WhatsApp Messenger is a FREE messaging app available for iPhone and other smartphones. Image Artifact that depicts or records visual perception The act of making an image with a mobile phone camera. The display of the mobile phone shows the image being made. An SARradar image acquired by the SIR-C/X-SAR radar on board the Space Shuttle Endeavour shows the Teide volcano. The city of Santa Cruz de Tenerife is visible as the purple and white area on the lower right edge of the island. Lava flows at the summit crater appear in shades of green and brown, while vegetation zones appear as areas of purple, green and yellow on the volcano's flanks