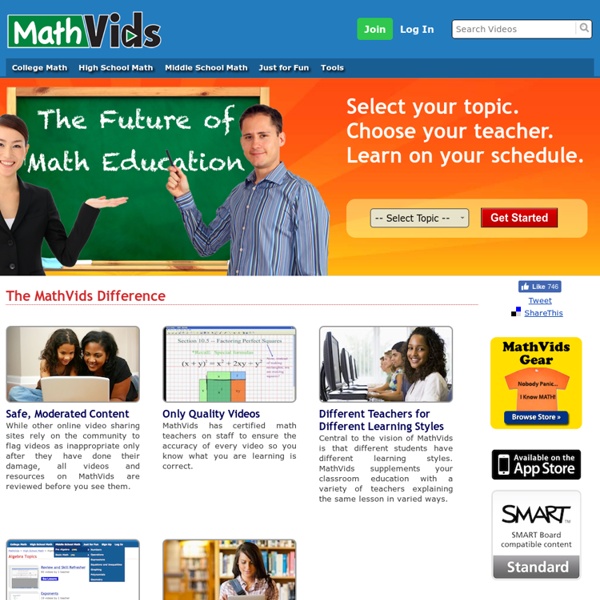 Safe, Moderated Content While other online video sharing sites rely on the community to flag videos as inappropriate only after they have done their damage, all videos and resources on MathVids are reviewed before you see them. Only Quality Videos MathVids has certified math teachers on staff to ensure the accuracy of every video so you know what you are learning is correct. Different Teachers for Different Learning Styles Central to the vision of MathVids is that different students have different learning styles.

Common Core Standards : CCSS.Math.Content.8.G.A.3 3. Describe the effect of dilations, translations, rotations, and reflections on two-dimensional figures using coordinates. Transformations are fascinating things in real life, in movies, and of course, in geometry. But if your students expect shapes to turn into giant fighting robots, they've got another thing coming. Students should already be aware of the basic geometric transformations and understand how they change and move shapes on the plane. This can be as simple as knowing that translations are slides, rotations are turns, reflections are flips, and dilations are enlargements or contractions.

2-5 geometric transformations - rotations Lesson: 2-5 geometric transformations - rotations Ryan Hall Williamsburg Collegiate Middle School New York, NY 2716 Views 100 Downloads Sample Problems from Chapter 1 Chapter 1: 7 year olds do It should be noted here that Morris Klein in his book "Mathematics, The Loss of Certainty" describes the confusions of and the mistakes made by, the great mathematicians like Newton, Leibnitz, Euler and the Bernoullis with infinite series and infinite sequences. So I figure if we start young people working on this material, they will make lots of mistakes, but will have a good chance of understanding it later on in high school and college.We're doing important mathematics here, and at the same time we're involving young people in a lot of arithmetic! 1. We're going to add these fractions

Calamity Jane Martha Jane Canary (May 1, 1852 – August 1, 1903 age 51), better known as Calamity Jane, was an American frontierswoman, and professional scout known for her claim of being an acquaintance of Wild Bill Hickok, but also for having gained fame fighting Indians. She is said to have also exhibited kindness and compassion, especially to the sick and needy. This contrast helped to make her a famous frontier figure.[1] Early life: 1852–1868[edit] Marker east of Princeton indicating the most widely believed location of her birth.

Prospect Hill Academy Charter School Andrea Palmer curriculum about me strategies 6th Grade Math 144 Lessons 11 new AdLIT > In Perspective Magazine > Reading and Writing to Learn in Mathematics: Strategies to Improve Problem Solving Feature by Clare Heidema Reading and Writing in Mathematics Hue is that attribute of a color by which we distinguish red from green, blue from yellow, etc. There is a natural order of hues: red, yellow, green, blue, purple. One can mix paints of adjacent colors in this series and obtain a continuous variation from one to the other.