Social isolation and loneliness among older adults in the context of COVID-19: a global challenge 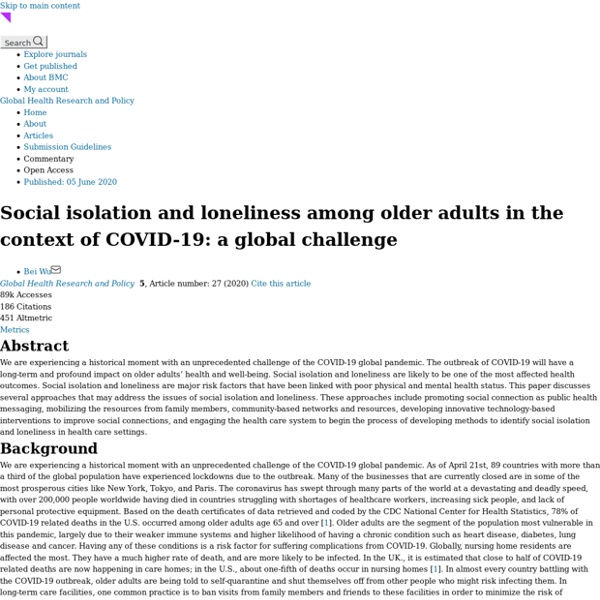 Social isolation is defined as the objective state of having few social relationships or infrequent social contact with others while loneliness is a subjective feeling of being isolated. Social isolation and loneliness are serious yet underestimated public health risks that affect a significant portion of the older adult population. In the U.S., approximately one-quarter of community-dwelling older adults are considered to be socially isolated, and 43% of them report feeling lonely [2]. The COVID-19 pandemic is increasing the number of older adults who are socially isolated including both community-dwelling older adults and nursing home residents, as many countries have issued stay-at-home orders and banned visits for nursing home residents. Prior to the disease outbreak, the vast major of community-dwelling older adults actively participated in social activities, such as attending senior centers, churches activities, traveling, and many other social events.

Health Effects of Social Isolation and Loneliness – Aging Life Care Association™ Clifford Singer, MD Adjunct Professor, University of Maine Chief, Geriatric Mental Health and Neuropsychiatry Acadia Hospital and Eastern Maine Medical Center 268 Stillwater Avenue Bangor Maine 04402 207.973.6179 csinger@emhs.org Cliff Singer is a geriatrician and psychiatrist. He lives in Orono, Maine and directs the Mood and Memory Clinic at Acadia Hospital and Alzheimer’s Disease Research Program for Acadia Hospital and Eastern Maine Medical Center in Bangor. Seniors felt less socially satisfied, more isolated during Covid-19 circuit breaker period: Survey, Singapore News SINGAPORE - Social isolation during the circuit breaker period resulted in lower social satisfaction levels for senior citizens, according to results from a monthly survey of about 7,500 people aged between 55 and 75 here. Social satisfaction levels dipped by about 4 per cent in May when compared with data from January. In particular, for senior citizens living with others, satisfaction levels fell to the pre-circuit breaker levels of peers living alone, while those living alone saw even lower satisfaction levels as safe distancing measures made it more difficult to find support from friends and the community. As of July, while satisfaction levels have rebounded after the circuit breaker period, which was from April 7 to June 1, they are not back to the levels they were at before. As Singapore's population ages, the proportion of those who remain single and live alone will increase, said Prof Straughan, a sociologist and former Nominated Member of Parliament.

The loneliness of social isolation can affect your brain and raise dementia risk in older adults Physical pain is unpleasant, yet it’s vital for survival because it’s a warning that your body is in danger. It tells you to take your hand off a hot burner or to see a doctor about discomfort in your chest. Pain reminds us all that we need to take care of ourselves. Social isolation, loneliness in older people pose health risks Human beings are social creatures. Our connection to others enables us to survive and thrive. Yet, as we age, many of us are alone more often than when we were younger, leaving us vulnerable to social isolation and loneliness—and related health problems such as cognitive decline, depression, and heart disease. Fortunately, there are ways to counteract these negative effects. NIA-supported researchers are studying the differences between social isolation and loneliness, their mechanisms and risk factors, and how to help people affected by these conditions.

Coronavirus: Elderly hit hard by social isolation amid circuit breaker measures, Health News A needle and the television set - these two objects have been keeping 83-year-old Nellie Woo company from morning to night for the past week while she is holed up alone at home. She used to enjoy playing bingo and exercising with her elderly neighbours at the Senior Activity Centre (SAC) downstairs, as well as chatting with volunteers who visited her studio flat. Now that all activities for seniors - including home visits - have ceased due to strict circuit breaker measures, Madam Woo is feeling lonely and emotionally down. Loneliness and Social Isolation Linked to Serious Health Conditions Social isolation was associated with about a 50% increased risk of dementia and other serious medical conditions. Loneliness and social isolation in older adults are serious public health risks affecting a significant number of people in the United States and putting them at risk for dementia and other serious medical conditions. A new reportexternal icon from the National Academies of Sciences, Engineering, and Medicine (NASEM) points out that more than one-third of adults aged 45 and older feel lonely, and nearly one-fourth of adults aged 65 and older are considered to be socially isolated.1 Older adults are at increased risk for loneliness and social isolation because they are more likely to face factors such as living alone, the loss of family or friends, chronic illness, and hearing loss. Loneliness is the feeling being alone, regardless of the amount of social contact. Social isolation is a lack of social connections. Health Risks of Loneliness

How Seniors Can Overcome the Negative Effects of Isolation While Social Distancing The guidelines around social distancing during the COVID-19 pandemic are a double-edged sword for the elderly living alone: Go out and risk exposure to coronavirus or stay home and risk feeling isolated and depressed. The abrupt shifts in routines, the distance from grown children, and the cancellation of everything from church services to coffee dates can leave seniors feeling lonely, which raises stress levels, impedes sleep, and triggers depression and anxiety. “All of us need a sense of connection during times of uncertainty,” says M. Delores Cimini, PhD, a licensed psychologist and the director of the Center for Behavioral Health Promotion and Applied Research at the University of Albany in New York. “It’s not social distance but physical distance they recommended. We need physical distance from each other while maintaining social connection.”

Causes of Social Isolation in Elderly Adults No one likes to feel lonely or isolated, but for many seniors, it’s a feeling they know all too well. As we get older, our children move away, we lose touch with friends, and sometimes have difficulty getting out of the house to socialize. All of these things contribute to isolation and loneliness in the elderly, though they mean two different things.

Boundless Psychology Physical Development in Late Adulthood The aging process often results in a loss of memory, deteriorated intellectual function, decreased mobility, and higher rates of disease. Learning Objectives Coronavirus: How seniors can avoid stress and loneliness using The Sun’s six-step self-isolation battle plan FACING self-isolation or limiting your contact can be daunting for the old and vulnerable, their loved ones and carers. Here we have expert advice, including from Age Concern’s Ruthe Isden, on how to make the process less stressful, and they advise how to avoid loneliness. ⚠️ Read our coronavirus live blog for the latest news & updates Carers must plan for if they fall ill

Loneliness and Social Isolation Linked to Serious Health Conditions Social isolation was associated with about a 50% increased risk of dementia and other serious medical conditions. Loneliness and social isolation in older adults are serious public health risks affecting a significant number of people in the United States and putting them at risk for dementia and other serious medical conditions. A new reportexternal icon from the National Academies of Sciences, Engineering, and Medicine (NASEM) points out that more than one-third of adults aged 45 and older feel lonely, and nearly one-fourth of adults aged 65 and older are considered to be socially isolated.1 Older adults are at increased risk for loneliness and social isolation because they are more likely to face factors such as living alone, the loss of family or friends, chronic illness, and hearing loss.

How Social Isolation Affects the Brain Daisy Fancourt was at her home in Surrey in southeast England when the UK government formally announced a nationwide lockdown. Speaking in a televised address on March 23, UK Prime Minister Boris Johnson laid out a suite of measures designed to curb the spread of COVID-19, including closing public spaces and requiring people to stay home except for exercise and essential tasks. For Fancourt, an epidemiologist at University College London (UCL), the announcement meant more than just a change to her daily life. It was the starting gun for a huge study, weeks in the planning, that would investigate the effects of enforced isolation and other pandemic-associated changes on the British public. We’re a social species.