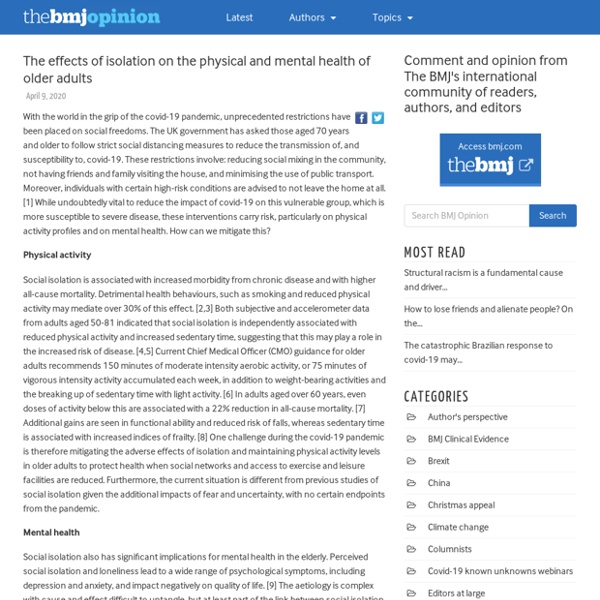 With the world in the grip of the covid-19 pandemic, unprecedented restrictions have been placed on social freedoms. The UK government has asked those aged 70 years and older to follow strict social distancing measures to reduce the transmission of, and susceptibility to, covid-19. These restrictions involve: reducing social mixing in the community, not having friends and family visiting the house, and minimising the use of public transport. Moreover, individuals with certain high-risk conditions are advised to not leave the home at all. [1] While undoubtedly vital to reduce the impact of covid-19 on this vulnerable group, which is more susceptible to severe disease, these interventions carry risk, particularly on physical activity profiles and on mental health. How can we mitigate this? Physical activity Social isolation is associated with increased morbidity from chronic disease and with higher all-cause mortality. Mental health Mitigation strategies Competing interests: None declared

Unexpected Causes of Senior Isolation While seniors have lived full and fulfilling lives, they may experience loneliness and isolation as they get older. Whether a senior lives alone at home or has been moved to a facility where they are surrounded by other seniors, they may have desires to interact with friends and loved ones but not be able to. Actions from family members or friends could also leave them feeling more isolated and alone than over. Health Effects of Social Isolation and Loneliness – Aging Life Care Association™ Clifford Singer, MD Adjunct Professor, University of Maine Chief, Geriatric Mental Health and Neuropsychiatry Acadia Hospital and Eastern Maine Medical Center 268 Stillwater Avenue Bangor Maine 04402 207.973.6179 csinger@emhs.org Cliff Singer is a geriatrician and psychiatrist. He lives in Orono, Maine and directs the Mood and Memory Clinic at Acadia Hospital and Alzheimer’s Disease Research Program for Acadia Hospital and Eastern Maine Medical Center in Bangor. He trained in general psychiatry and geriatric medicine at Oregon Health and Science University and served on the faculties of psychiatry and neurology there and at the University of Vermont before moving to Maine in 2010. Clifford Singer, MD

Social Isolation is Bad for the Mental Health of Older Adults Social integration and having positive social relationships are important for our health and well-being, especially in old age. Social isolation, the flip side of social integration, is associated with many negative health outcomes, including mortality. The risk of death for people who are socially isolated is as great as the risk of death for people who smoke 15 cigarettes a day. As such, many prominent national and international organizations have now called for a greater understanding of social isolation and how to mitigate its deadly effects.

7 factors that could lead to social isolation Winter can be an especially solitary time for some seniors, who may find they are spending more time alone in their homes because of bad weather or lack of transportation. Canadian research shows that isolation isn’t just confined to the winter months for older adults: a recent federal government profile of social isolation estimated that 30 per cent of seniors are at risk of becoming socially isolated.* A report from the International Federation of Ageing also identified social isolation as one of the top issues facing Canada’s aging population.* How Social Isolation Affects the Brain Daisy Fancourt was at her home in Surrey in southeast England when the UK government formally announced a nationwide lockdown. Speaking in a televised address on March 23, UK Prime Minister Boris Johnson laid out a suite of measures designed to curb the spread of COVID-19, including closing public spaces and requiring people to stay home except for exercise and essential tasks. For Fancourt, an epidemiologist at University College London (UCL), the announcement meant more than just a change to her daily life.

Loneliness and Social Isolation Linked to Serious Health Conditions Social isolation was associated with about a 50% increased risk of dementia and other serious medical conditions. Loneliness and social isolation in older adults are serious public health risks affecting a significant number of people in the United States and putting them at risk for dementia and other serious medical conditions. A new reportexternal icon from the National Academies of Sciences, Engineering, and Medicine (NASEM) points out that more than one-third of adults aged 45 and older feel lonely, and nearly one-fourth of adults aged 65 and older are considered to be socially isolated.1 Older adults are at increased risk for loneliness and social isolation because they are more likely to face factors such as living alone, the loss of family or friends, chronic illness, and hearing loss. Loneliness is the feeling being alone, regardless of the amount of social contact.

Social Isolation and Loneliness in Older Adults: Opportunities for the Health Care System at the status of at-risk populations in other countries (e.g., Steptoe et al., 2013; Zebhauser et al., 2014), studies focusing on at-risk subpopulations in the United States are sparse. Two populations in the United States that have been researched more extensively than others are immigrants and individuals who identify as part of the gay, lesbian, bisexual, and transgender community. Research pertaining to these two groups is described below. Immigrants The unspoken COVID-19 toll on the elderly: Loneliness Mary Faines just turned 94 years old. For years the tradition has been to celebrate her special day with a festive dinner with her husband, son and daughter-in-law. It took a pandemic to break the long-standing tradition.

Social Isolation Leads to Depression for Seniors As people age, they may become isolated; and that isolation can lead to depression, according to a recent post from the Straits Times. A study led by Dr. Nadee Goonawardene reveals that seniors living alone are most at risk for mental health issues like depression. The Struggle with Social Isolation Elderly people often live alone, especially after the death of a spouse. Their children may have moved away, or may be too busy with their own lives to come and visit often. Social Isolation and Memory Decline in Later-life Skip to Main Content Advertisement Search Interventions to reduce social isolation and loneliness among older people: an integrative review - Gardiner - 2018 - Health &amp; Social Care in the Community Abstract Loneliness and social isolation are major problems for older adults. Interventions and activities aimed at reducing social isolation and loneliness are widely advocated as a solution to this growing problem.

Older adults who are socially isolated tend to perform worse on tests of thinking abilities Physical pain is unpleasant, yet it’s vital for survival because it’s a warning that your body is in danger. It tells you to take your hand off a hot burner or to see a doctor about discomfort in your chest. Pain reminds us all that we need to take care of ourselves. Feeling lonely is the social equivalent to feeling physical pain. It even triggers the same pathways in the brain that are involved in processing emotional responses to physical pain.

Promoting cognitive health in older adults We recently published an evidence-based resource to support local authorities, commissioners and providers to promote cognitive health in older adults aged 55 and above. This is an important issue because, whilst the fact that people are living longer lives is a public health success story, we know that many of these extra years are spent in ill health or disability. The next challenge for the health and social care sector is to support individuals to prevent ill health in later years and increase healthy life expectancy, so it's crucial that older adults are supported to maintain and improve their physical, mental and social health and wellbeing. An alarming proportion of mid-life and older adults are physically inactive, smoke, misuse alcohol, have poor eating patterns and are socially isolated, putting them at risk of substantially increased mortality and ill health.

How Social Interaction Plays a Principal Role in Dementia Dementia is an umbrella term for a progressive age-related disorder which is primarily seen in senior patients. It is associated with deterioration of the patients’ memory, cognition, behavior and a decline in their ability to perform activities of daily living. Alzheimer’s disease is the most common type of dementia that makes up nearly 70 percent of the cases. One in ten Americans aged 65 years and older suffers from dementia. 2017 statistics reveal that an estimated 5.3 million senior Americans are living with dementia related to Alzheimer’s disease. According to the U.S. Census Bureau, nearly 28 percent of seniors aged 65 years and older are living alone.