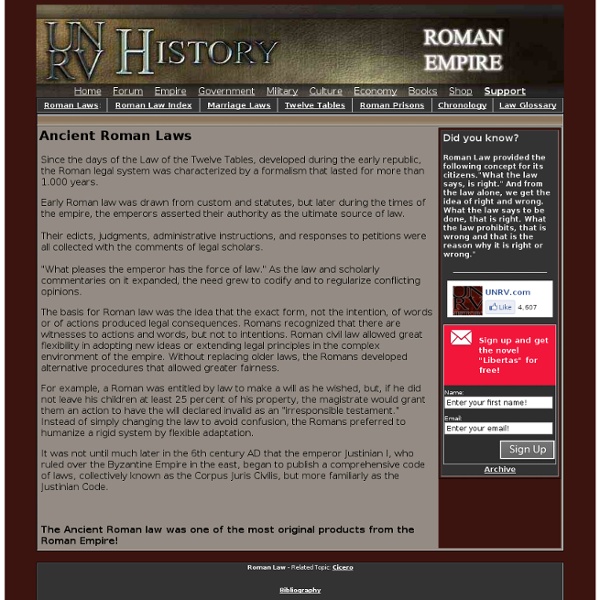 Since the days of the Law of the Twelve Tables, developed during the early republic, the Roman legal system was characterized by a formalism that lasted for more than 1.000 years. Early Roman law was drawn from custom and statutes, but later during the times of the empire, the emperors asserted their authority as the ultimate source of law. Their edicts, judgments, administrative instructions, and responses to petitions were all collected with the comments of legal scholars. "What pleases the emperor has the force of law." As the law and scholarly commentaries on it expanded, the need grew to codify and to regularize conflicting opinions. The basis for Roman law was the idea that the exact form, not the intention, of words or of actions produced legal consequences. The Ancient Roman law was one of the most original products from the Roman Empire! Related:  Ancient/Medieval History • Rome • Ancient Rome 753 BC - 476 AD

Ancient Rome In its approximately 12 centuries of existence, Roman civilization shifted from a monarchy to a classical republic and then to an increasingly autocratic empire. Through conquest and assimilation, it came to dominate Southern and Western Europe, Asia Minor, North Africa, and parts of Northern and Eastern Europe. Rome was preponderant throughout the Mediterranean region and was one of the most powerful entities of the ancient world. It is often grouped into "Classical Antiquity" together with ancient Greece, and their similar cultures and societies are known as the Greco-Roman world. Ancient Roman society has contributed to modern government, law, politics, engineering, art, literature, architecture, technology, warfare, religion, language and society. By the end of the Republic, Rome had conquered the lands around the Mediterranean and beyond: its domain extended from the Atlantic to Arabia and from the mouth of the Rhine to North Africa. Founding myth Kingdom Main article: Roman Kingdom

Coins of ancient Rome | DengeDenge Online Magazine Nude Figures and Erotic Images on Ancient Coins. These coins were made in Rome around the first century BC and they were paying for certain services, or they went as usual? Punic Wars - Ancient History Over the next decades, Rome took over control of both Corsica and Sardinia as well, but Carthage was able to establish a new base of influence in Spain beginning in 237 B.C., under the leadership of the powerful general Hamilcar Barca and, later, his son-in-law Hasdrubal. According to Polybius and Livy in their histories of Rome, Hamilcar Barca, who died in 229 B.C., made his younger son Hannibal swear a blood oath against Rome when he was just a young boy. Upon Hasdrubal’s death in 221 B.C., Hannibal took command of Carthaginian forces in Spain. Two years later, he marched his army across the Ebro River into Saguntum, an Iberian city under Roman protection, effectively declaring war on Rome. The Second Punic War saw Hannibal and his troops–including as many as 90,000 infantry, 12,000 cavalry and a number of elephants–march from Spain across the Alps and into Italy, where they scored a string of victories over Roman troops at Ticinus, Trebia and Trasimene.

Roman Senate It was one of the most enduring institutions in Roman history, being founded in the first days of the city (traditionally founded in 753 BC). It survived the overthrow of the kings in 509 BC, the fall of the Roman Republic in the 1st century BC, the split of the Roman Empire in 395 AD, the fall of the Western Roman Empire in 476 AD, and barbarian rule of Rome in the 5th, 6th, and 7th centuries. The Senate of the West Roman Empire continued to function until 603 AD. During the days of the kingdom, it was little more than an advisory council to the king.[1] The last king of Rome, Lucius Tarquinius Superbus, was overthrown following a coup d'état led by Lucius Junius Brutus. During the early Republic, the Senate was politically weak, while the executive magistrates were quite powerful. After the transition of the Republic into the Principate, the Senate lost much of its political power as well as its prestige. Senate of the Roman Kingdom[edit] Senate of the Roman Republic[edit]

Digital Atlas of the Roman Empire Proverbs, Quotes, and Sayings of Ancient Rome There are many sayings used in the Roman world which are interesting and fun to know. Many reflect the attitude of the culture at that time, and of the person who was quoted. Knowing these quotes can assist in getting immersed in the culture of a game, and for those interested, in role playing. Greetings and Goodbyes This is fairly simple to remember. Goodbye was often said as “Vade en pace” which means “go in peace”, though that was a bit lengthy and formal. Proverbs of the time The people of the time of the Roman republic and empire had a gift with words. "Deos fortioribus adesse." - Meaning "The gods are on the side of the stronger", translate it to mean you should make your own fortune." Famous Quotes of The Time "Dulce et decorum est pro patria mori" - by Horace, meaning "It is a sweet and seemly thing to die for ones country". Comment about this article in our forums!

Mesoamerica Mesoamerica and its cultural areas Mesoamerica is a region and cultural area in the Americas, extending approximately from central Mexico to Belize, Guatemala, El Salvador, Honduras, Nicaragua, and northern Costa Rica, within which a number of pre-Columbian societies flourished before the Spanish colonization of the Americas in the 15th and 16th centuries.[1][2] It is one of six areas in the world where ancient civilization arose independently, and the second in the Americas after Norte Chico (Caral-Supe) in present-day northern coastal Peru. Among the earliest complex civilizations was the Olmec culture, which inhabited the Gulf coast of Mexico and extended inland and southwards across the Isthmus of Tehuantepec. Frequent contact and cultural interchange between the early Olmec and other cultures in Chiapas, Guatemala and Oaxaca laid the basis for the Mesoamerican cultural area. The distinct Mesoamerican cultural tradition ended with the Spanish conquest in the 16th century.

Legions Choose a name and number for your Legion (consult history books if authenticity is a concern). Create a Legion banner (Signum). Attend at least 20 medieval events annually. Own and wear torso armor. Submit Legion’s attendance to Dominus or the Quaestor in writing at every battle for records. A Legion is commanded by a Tribune, Legate, Count or Duke.