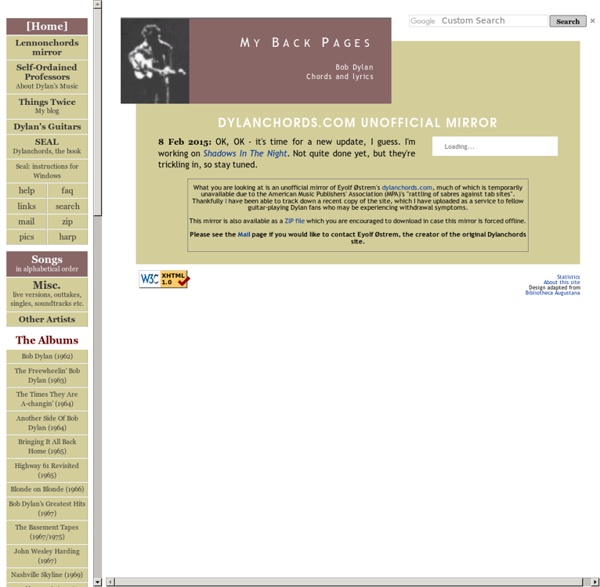 A Traditional Music Library of folk music, tune-books, songbooks and sheet music Brad's Paul Simon Guitar Tablature Page All the tablature on this site is privately owned by the webmaster except where stated and is made available to the internet community for personal research and educational purposes only. Only amateur tablature will be presented here. I will refrain from displaying any song on this site for which there is accurate professional tablature available for purchase commercially. In 2001, Wise Publications published two new professional tablature books covering some music of Paul Simon. Tablature America (Paris, 1970) Anji (Live From New York City album, 1967) (Orig. April Come She Will (Sounds of Silence album, 1966) At The Zoo (Miami University, 1969) Bleecker Street (Demo version from Old Friends Collection) Bleecker Street (BBC promo show, 1965) Blues Run the Game (Old Friends Collection) (Orig. The Boxer (Welcome in Holland, Amsterdam, 1970) Bridge Over Troubled Water (Demo version from Paul Simon 1964/1993 Collection) Can't Help But Wonder Where I'm Bound (BBC promo show, 1966) (Orig. St.

IN STOCK NOW! - Korg SV1 Super Vintage Piano | Dolphin Music The name pretty much says it all. The SV-1 Stage Vintage Piano offers the most rewarding compendium of electro-mechanical, transistorized, tape-driven, analogue, and early digital keyboards ever available in a single instrument. For news & offers: Join our mailing list Add us on Facebook Follow us on Twitter Models : SV-1 73 keys and SV-1 88 Keys: Crafted using Korg's RX (Real eXperience) Technology; each sound is a detailed and authentic re-creation, accurately capturing the full range of expression and dynamics of the original. Designed with performance in mind, the SV-1 is a pleasure to play. Best of all, the Korg SV-1 provides an economical, reliable, portable, and maintenance-free alternative to collecting and maintaining a stable of vintage instruments. The sounds The 36 sounds in the SV-1 span from electric pianos, acoustic pianos, organs, strings and synth. Retro styling Housed in a bold, curvaceous body, the SV-1 really stands out from the crowd.

The Bonnie Banks o' Loch Lomond "The Bonnie Banks o' Loch Lomond", or simply "Loch Lomond" for short, is a well-known traditional Scottish song (Roud No. 9598) first published in 1841 in Vocal Melodies of Scotland.[1][2] (Loch Lomond is the largest Scottish loch, located between the counties of Dunbartonshire and Stirlingshire.) In Scotland, the song is often the final piece of music played during an evening of revelry (a dance party or dinner, etc.). Loch Lomond was performed live by the Benny Goodman band in the Famous 1938 Carnegie Hall Jazz Concert performance January 16, 1938, featuring Martha Tilton on the vocal. The song has been recorded by many performers over the years, including the rock band AC/DC, jazz singer Maxine Sullivan (for whom it was a career-defining hit), the Mudmen, and Scottish-Canadian punk band The Real McKenzies.[citation needed] Both Runrig and Quadriga Consort used to perform Loch Lomond as their concert's final song. Lyrics[edit] Chorus Chorus Origins[edit] Interpretation[edit] Media[edit]

Lives in the Balance Lives in the Balance is the eighth album by American singer/songwriter Jackson Browne, released in 1986 (see 1986 in music). It reached number 23 on The Billboard 200 chart. The title track as well as "For America" and "In the Shape of a Heart" were released as singles. The album was ranked number 88 on Rolling Stone's list of the best 100 albums of the 1980s.[1] The album reached number 2 in Sweden.[2] History[edit] Lives in the Balance was the first album by Browne where overtly political and socially critical songs dominated (three of which were about president Ronald Reagan), although it also included one of his best remembered songs about relationships, the tragic "In the Shape of a Heart", inspired by his relationship with his first wife. The album was certified as a Gold record in 1986 by the RIAA.[3] Reception[edit] Critical press focused on the political direction of Lives in the Balance. Track listing[edit] All tracks composed by Browne except where noted.[8] Personnel[edit]

The Lonesome Death of Hattie Carroll Words and music Bob Dylan Released on The Times They Are A-changin' (1964) and on Biograph (1985) and in live versions on Live 1975 (2002) and Live 1964 (2004) Tabbed by Eyolf Østrem Capo 4th fret (sounding key E major). Live 1975: no capo In most live renditions, he ends each phrase of the verse with a G chord. The place marked with *) is often embellished with the following figure: C Am Em William Zanzinger killed poor Hattie Carroll C Am Em With a cane that he twirled around his diamond ring finger C Am Em At a Baltimore hotel society gath'rin'. BRUCE SPRINGSTEEN LYRICS - State Trooper New Yersey Turnpike ridin' on a wet night 'neath the refinery's glow, out where the great black rivers flow License, registration, I ain't got none, but I got a clear conscience 'Bout the things that I done Mister state trooper please don't stop me... Maybe you got a kid maybe you got a pretty wife, the only thing that I got's been botherin' me my whole life Mister state trooper please don't stop me In the wee wee hours your mind gets hazy, radio relay towers lead me to my baby Radio's jammed up with talk show stations It's just talk, talk, talk till you lose your patience Mister state trooper please don't stop me Hey somebody out there, listen to my last prayer Hi ho silver-o deliver me from nowhere BRUCE SPRINGSTEEN lyrics are property and copyright of their owners."State Trooper" lyrics provided for educational purposes and personal use only.

James Booker:St. James Infirmary Lyrics Lyrics - Lyric Wikia - song lyrics, music lyrics James Booker I went down to St. James Infirmary,I heard my baby cry.I was so brokenheartedShe was gone somewherein the bye and bye. Tried so hard to keep from cryingMy tears they fell like leadShe was all I had to live forIt could have been someone else instead She’s gone let’s just say they’re gonna bless herWherever she may beShe could have searched the wide world overShe wouldn’t have found another man like me,She couldn’t have found another man like me

Public Domain Blues Songs | 12bar Blues Guitar What is a Public Domain song? In short, a public domain song is a song that is not protected by any copyright. That means, it can be used freely by anyone, can be modified and used in any way. But when is a song free of any copyright? There are usually three possibilities: The song never had a copyright For most Blues traditionals the author is simply unknown. Examples: The work of Robert Johnson (1911 – 1938) is public domain in the European Union because Johnson died more than 70 years ago, but not in the USA, because his recordings were published after 1922. Sometimes the music is public domain, but the lyrics are not. Please note that – although this list is made with great efforts to include most accurate information – I can not guarantee that all songs listed here are public domain in your country! To get an idea of the song, you might try a YouTube search, most songs can be found in different versions there. Additional Links Song list 44 Blues (Forty-Four) Ninety Nine Blues Candy man