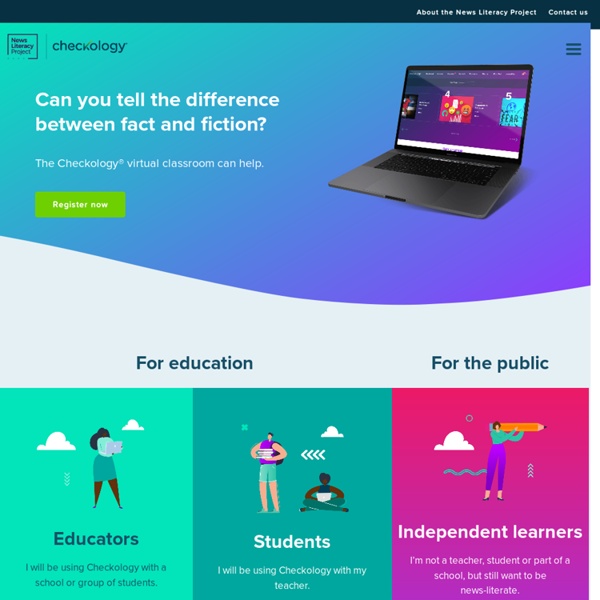 An Engaging Word Game Helps Students Grasp Implicit Bias As part of an effort to demonstrate the effect of implicit bias, library media specialist Jacquelyn Whiting devised an exercise that looks similar to “Mad Libs,” the popular fill-in-the-blank word game. In EdSurge’s “Everyone Has Invisible Bias. This Lesson Shows Students How to Recognize It,” Whiting describes how she removed words from a New York Times opinion essay to create a new, highly engaging activity for a 10th-grade class.

Can you spot the problem with these headlines? (Level 1) - Sometimes a health headline will focus on a study done in mice, or done with only 2 people, or done by forcing people to run hundreds of miles a day. The farther the study is from who you are and how you act in your real life, the less likely the results will translate directly to you. For example, the Physicians Health Study is a well-known study that was conducted in the 1980s that demonstrated that aspirin reduced the risk of having a heart attack. The observed effect was very strong and lead to headlines such as: “Health; Doctors Confirm Benefits of Aspirin”, however this study was only conducted among men, and since it has been demonstrated that the effect may not be the same for women.

Filter bubble Template:Direct1 The term was coined by internet activist Eli Pariser circa 2010 (Technology such as social media) “lets you go off with like-minded people, so you're not mixing and sharing and understanding other points of view ... It's super important. 50 Education Technology Tools Every Teacher Should Know About Technology and education are pretty intertwined these days and nearly every teacher has a few favorite tech tools that make doing his or her job and connecting with students a little bit easier and more fun for all involved. Yet as with anything related to technology, new tools are hitting the market constantly and older ones rising to prominence, broadening their scope, or just adding new features that make them better matches for education, which can make it hard to keep up with the newest and most useful tools even for the most tech-savvy teachers. Here, we’ve compiled a list of some of the tech tools, including some that are becoming increasingly popular and widely used, that should be part of any teacher’s tech tool arsenal this year, whether for their own personal use or as educational aids in the classroom. Social Learning These tools use the power of social media to help students learn and teachers connect. Learning

Infographic: Beyond Fake News – 10 Types of Misleading News – Seventeen Languages The work needed to effectively filter information in our media-saturated environment takes time and skill. A study showed that the more content we consume, the more our ability to make decisions about its veracity becomes impaired. With 80% of Europeans now regularly going online, it is vital for the sustainable and effective functioning of democracy for citizens to be able to curate their media diets with a healthy critical eye. Our Beyond Fake News infographic identifies the 10 types of potentially misleading news. SIFT (The Four Moves) So if long lists of things to think about only make things worse, how do we get better at sorting truth from fiction and everything in-between? Our solution is to give students and others a short list of things to do when looking at a source, and hook each of those things to one or two highly effective web techniques. We call the “things to do” moves and there are four of them: Stop The first move is the simplest.

A Nixon Deepfake, a 'Moon Disaster' Speech and an Information Ecosystem at Risk What can former U.S. president Richard Nixon possibly teach us about artificial intelligence today and the future of misinformation online? Nothing. The real Nixon died 26 years ago. The Future of Fake News Adler presents a few new tools that seem pretty innocuous and even cool at first look. But when you think about how they might be used to spread misinformation, the ethical implications are concerning. Voco, an Adobe application still in development, promises to become “the Photoshop for speech.” After inputting a 40-minute recording of a person’s speech, the user can use a simple text editor to “write” an original and very convincing new recording in that person’s voice.