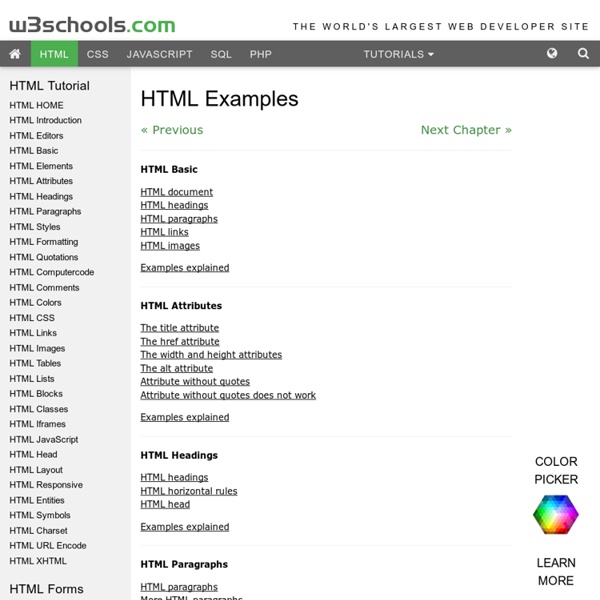 Internet en 40 cartes (en anglais) The internet increasingly pervades our lives, delivering information to us no matter where we are. It takes a complex system of cables, servers, towers, and other infrastructure, developed over decades, to allow us to stay in touch with our friends and family so effortlessly. Here are 40 maps that will help you better understand the internet — where it came from, how it works, and how it's used by people around the world. How the internet was created Before the internet, there was the ARPANET Before the internet, there was the ARPANETARPANET, the precursor to the modern internet, was an academic research project funded by the Advanced Research Projects Agency, a branch of the military known for funding ambitious research projects without immediate commercial or military applications.

CSS Get the lowdown on the key pieces of Bootstrap's infrastructure, including our approach to better, faster, stronger web development. HTML5 doctype Bootstrap makes use of certain HTML elements and CSS properties that require the use of the HTML5 doctype. Include it at the beginning of all your projects. <!DOCTYPE html><html lang="en"> ...

HTML5 - Web developer guide HTML5 is the latest evolution of the standard that defines HTML. The term represents two different concepts: It is a new version of the language HTML, with new elements, attributes, and behaviors, and a larger set of technologies that allows more diverse and powerful Web sites and applications. This set is sometimes called HTML5 & friends and often shortened to just HTML5. CSS Color Module Level 3 Abstract CSS (Cascading Style Sheets) is a language for describing the rendering of HTML and XML documents on screen, on paper, in speech, etc. It uses color-related properties and values to color the text, backgrounds, borders, and other parts of elements in a document. jack.minardi.org : SyncNet: A Decentralized Web Browser Imagine if we lived in a world where more demand meant less load for a webserver. Imagine if we lived in a world where no organization could take down a website, and everyone could publish a site with no hassle or upfront cost. SyncNet is a first step into that world. SyncNet is an experimental new browser built on top of BitTorrent Sync and (soon) Colored Coins. Every time you access a site, you store all of its contents on your machine.

HTML element reference - HTML (HyperText Markup Language) This page lists all the HTML elements. They are grouped by function to help you find what you need to achieve what you have in mind. Although this guide is written for those who are new or newer to coding, we intend it to be a useful reference for anyone. Basic elements CSS: Specificity Wars CSS: Specificity Wars Join me, and together we can rule the galaxy as father and geeks! A few weeks back in Cupertino, I saw Aaron explain how the specificity of CSS selectors is calculated in a way which I hadn't seen before. Learn javascript in Y Minutes JavaScript was created by Netscape’s Brendan Eich in 1995. It was originally intended as a simpler scripting language for websites, complementing the use of Java for more complex web applications, but its tight integration with Web pages and built-in support in browsers has caused it to become far more common than Java in web frontends. JavaScript isn’t just limited to web browsers, though: Node.js, a project that provides a standalone runtime for Google Chrome’s V8 JavaScript engine, is becoming more and more popular. JavaScript has a C-like syntax, so if you’ve used languages like C or Java, a lot of the basic syntax will already be familiar.

12 Essential Responsive Design Tools Translating client requirements to a full fledged, live website is no easy task. At the best of times, it requires multiple rounds of discussions between clients, designers, and developers, resulting in multiple iterations of the design, and the website itself. Throw in the whole responsive concept – having your design adapt to all kinds of mobile devices – and it can get a bit much to handle. Fortunately, designers and developers are an innovative, caring, and sharing lot.

The top 25 responsive web design tools Over the past few years we've seen an explosion of web-enabled devices with varying resolutions, capabilities, form factors, pixel densities, interaction methods and more. This onslaught of connected devices is just the beginning, and we're bound to see people accessing the web from a greater number of devices in the coming years. It's futile to create a dedicated web experience for every single device class out there, and the need to create a smart, flexible, adaptable web experiences is becoming more apparent every day.

11 Free jQuery CSS3 Navigation Menu Plugins These days, jQuery Navigation menus are more than plain texts with links on it. With the command of jQuery, it can transform the menu of a web site into a dynamic menu. Despite the fact that CSS3 can now be utilized to make dynamic menu, still, the query includes more functionality to the menus. Aside from the element functionalities, the design should likewise be considered. LIVE WEBCAST: Inspiring future generations with open hardware - the Raspberry Pi Eben Upton From: The IET Young Professionals' Event 2012, Savoy Place, London, 18 October 2012 18 October 2012 IT channel Please login to view IET.tv Technology channel presentations.

Clearing a float container without source markup (This clearing technique was developed by Tony Aslett, of csscreator.com. The earliest known mention of the basic :after idea is found here.) Notice as of March 4th, 2008: The article you are reading is getting a bit old and much new information on the subject of clearing has appeared since it was written. 10 Search Engines to Explore the Invisible Web - StumbleUpon No, it’s not Spiderman’s latest web slinging tool but something that’s more real world. Like the World Wide Web. The Invisible Web refers to the part of the WWW that’s not indexed by the search engines. Most of us think that that search powerhouses like Google and Bing are like the Great Oracle”¦they see everything.