What Is the 'Bystander Effect' and How Do People Overcome It? 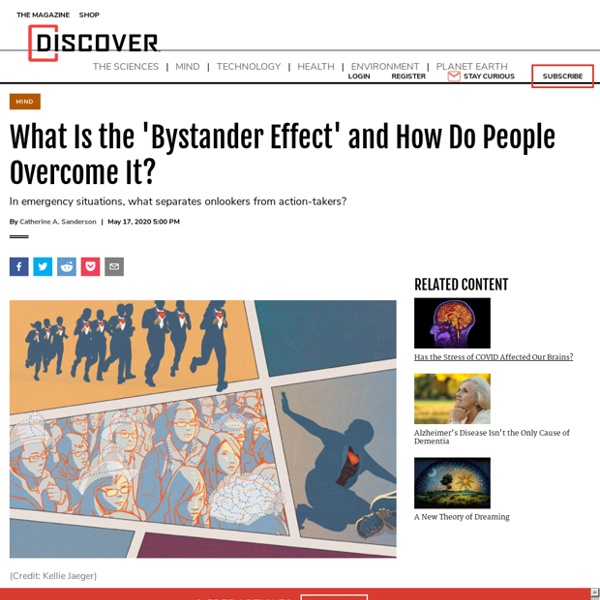 This story appeared in the June 2020 issue as "Action!" Subscribe to Discover magazine for more stories like this. On April 9, 2017, three security officers from the Chicago Department of Aviation forcibly removed David Dao from an overbooked United Airlines flight. Dao, a 69-year-old doctor, was dragged down the plane’s aisle after he refused to give up his seat. In the process, his head hit an armrest and he was knocked unconscious. The passengers clearly recognized what was occurring: Many took out their phones and filmed the scene and later expressed their outrage loudly on social media. At some level, this is hardly surprising. However, this is not a hard-and-fast rule; sometimes people in groups are able to break out of the bystander role. Psychologists call those who display moral courage and choose to do something rather than watch in silence moral rebels. Specialized Skills If you act, will it matter? (Credit: Kellie Jaeger) Confidence Is Key Lives at Stake Bigger, Better Brains?

We Are All Bystanders For more than 40 years, Peggy Kirihara has felt guilty about Stewart. Peggy liked Stewart. They went to high school together. Their fathers were friends, both farmers in California’s Central Valley, and Peggy would always say “hi” when she passed Stewart in the hall. Yet every day when Stewart boarded their school bus, a couple of boys would tease him mercilessly. How to be kinder to strangers in Singapore, Opinion News The Charities Aid Foundation recently released the World Giving Index 2017, which provides insight into the scope and nature of giving around the world. Based on data collected from the Gallup World Poll, the index, which polled 1,000 individuals in each representative country, revealed two surprising facts. Myanmar, Indonesia and Kenya turned out to be among the most charitable countries, even though they have a huge number of their populations living below the poverty line.

Overcome the bystander effect - British Red Cross Have you ever seen someone collapsed on the side of the road but walked on by? Or ignored a person who’s fallen over? Maybe when you got home you thought, ‘I really should have done something’. This is the “bystander effect”. But don’t despair: by reading this you’re on track to never walk on by again. If someone we know is hurt or in distress, we are likely to step in and help them.

Bystander Effect Bystander Effect Definition Individuals who see or hear an emergency (but are otherwise uninvolved) are called bystanders. The bystander effect describes the phenomenon in which such individuals are less likely to seek help or give assistance when others are present. This does not mean that bystanders are apathetic to the plight of others, for bystanders often show signs of distress, anxiety, and concern if they delay responding or fail to respond at all. It also does not necessarily mean that a victim will be less likely to receive help as the number of bystanders present increases—after all, the greater the number of other people present, the greater is the likelihood that at least one of them will intervene. In the event of a medical emergency, for instance, a larger group of bystanders is more likely to contain someone trained to administer appropriate first-aid measures.

10 Notorious Cases of the Bystander Effect The bystander effect is the somewhat controversial name given to a social psychological phenomenon in cases where individuals do not offer help in an emergency situation when other people are present. The probability of help has in the past been thought to be inversely proportional to the number of bystanders. In other words, the greater the number of bystanders, the less likely it is that any one of them will help. This list describes the prototype of the effect and cites nine particularly heinous examples. The Parable of The Good Samaritan Bystander Effect Bystander effect, the inhibiting influence of the presence of others on a person’s willingness to help someone in need. Research has shown that, even in an emergency, a bystander is less likely to extend help when he or she is in the real or imagined presence of others than when he or she is alone. Moreover, the number of others is important, such that more bystanders leads to less assistance, although the impact of each additional bystander has a diminishing impact on helping. Investigations of the bystander effect in the 1960s and ’70s sparked a wealth of research on helping behaviour, which has expanded beyond emergency situations to include everyday forms of helping. By illuminating the power of situations to affect individuals’ perceptions, decisions, and behaviour, study of the bystander effect continues to influence the course of social psychological theory and research. Bystander intervention

Now. Powered by Northrop Grumman If you see someone in distress, will you help them? We all like to consider ourselves to be good people, but when we’re caught in the moment, we freeze. What is the bystander effect? For more than 50 years, psychologists have observed this phenomenon again and again in experiments and in real life. The research overwhelmingly shows the more people that are present when there’s an emergency, the less likely they are to help. What Is the Bystander Effect?