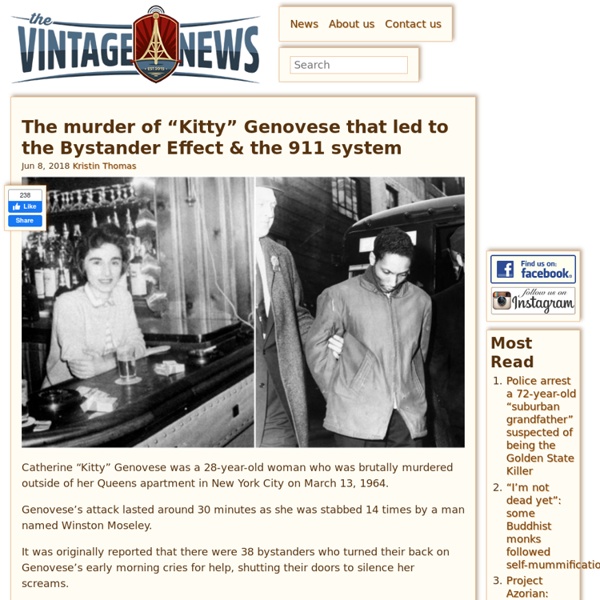 Catherine “Kitty” Genovese was a 28-year-old woman who was brutally murdered outside of her Queens apartment in New York City on March 13, 1964. Genovese’s attack lasted around 30 minutes as she was stabbed 14 times by a man named Winston Moseley. It was originally reported that there were 38 bystanders who turned their back on Genovese’s early morning cries for help, shutting their doors to silence her screams. Although that judgment was later proven to be inaccurate, the murder was considered the driving force behind our emergency 911 system today and the discovery of the term that so many psychologists are still researching: “The Bystander Effect.” It was around 3 o’clock in the morning when Genovese arrived home from managing a local bar where she worked. Kitty Genovese She parked her car and started walking towards her apartment building, when she noticed a man standing at the corner end of the parking lot. Genovese nervously kept walking. Studio photo of Catherine “Kitty” Genovese, 28.

Outrage in China after toddler run over, ignored - CNN Gruesome footage of a toddler falling victim to two successive hit-and-run accidents and then being ignored by many passers-by at the scene last week in southern China continued to galvanize the nation Monday, prompting a fierce debate on the state of morality in Chinese society. A security camera captured the horrific incident last Thursday outside a hardware market in Foshan, Guangdong Province. Two-year-old Wang Yue was seen toddling in the middle of a narrow street and looking around, oblivious to a fast-approaching white van. The disturbing video shows the van knocking the girl over.

A New Look at the Killing of Kitty Genovese: The Science of False Confessions – Association for Psychological Science – APS On March 13, 1964 a woman named Catherine “Kitty” Genovese was murdered outside of her apartment in Queens, New York. Over the course of a brutal attack lasting over 30 minutes, Genovese was stabbed at least 14 times. It was widely reported that despite Genovese’s screams for help, not a single one of the 38 bystanders at the apartment that night came to her aid. The case caught the attention of the public, as well as psychological scientists, leading to research on the “bystander effect.” But recent research raises the question: What if we’ve had the story all wrong for the last 50 years? How to Overcome the Bystander Effect Psychologists have long been interested in exactly why and when we help other people. There has also been a tremendous amount of interest in the reasons why we sometimes don't help others. The bystander effect is a social phenomenon that occurs when people fail to help those in need due to the presence of other people. In many cases, people feel that since there are other people around, surely someone else will leap into action.1 While the bystander effect can have a negative impact on prosocial behavior, altruism and heroism, researchers have identified a number of different factors that can help people overcome this tendency and increase the likelihood that they will engage in helping behaviors.2 Some of these include:

Passers-by help block off open manhole on road, Singapore News & Top Stories - The Straits Times Two groups of Good Samaritans sprang into action the last two days - the first to help a boy trapped under a car after an accident, the second to warn other road users to avoid an exposed manhole. The sight of a lorry swerving to avoid an exposed manhole in Jalan Bahar spurred several Singapore Civil Defence Force (SCDF) officers and passers-by to do something about the problem yesterday. SCDF fire biker Muhammad Hilmi Mohammad Fuad, 31, was travelling out of the Civil Defence Academy at around 10.45am when he saw the open manhole on the three-lane road. The senior staff sergeant rallied six others in the vicinity, including off-duty SCDF officers, to help. While some helped to direct traffic, others used barricades from a construction site to channel traffic away safely, SCDF said in response to queries. Videos show them lining up the barricades across the rightmost lane on the road.

Torture and Death of Jew Deepen Fears in France The police did not yet know the identities of the gang members but were close on their heels. Around Feb. 10, Mr. Fofana briefly visited an Internet cafe on the Rue de la Fidélité in the 10th Arrondissement, wearing a cap and a scarf that covered his mouth and nose. "I don't even think he took his gloves off," the manager said Friday. Just 15 minutes later, he said, police officers arrived looking for a black man, a computer-generated sketch in hand. How To Counteract The Bystander Effect - University of Pittsburgh Student EMS Counteracting The Bystander Effect It is a beautiful spring day in Oakland. There are just a few weeks left until summer break and everyone is ready to go home. You are in Cathy studying and you see that the person a few tables over seems to be passed out.

TODAYonline I refer to the news reports of the fatal traffic accident on Sunday (Dec 29) at Lucky Plaza. I applaud the Good Samaritans who unselfishly helped to lift up the car, pulled the victims out and attended to them. These are acts of true heroism. They encourage us to lend help to accident victims when needed and show that there are still compassionate people who don’t respond to accidents by whipping out their phones first to take videos and photos to circulate to their friends.

An example of how the bystander effect can happen. On 13 March 1964, Catherine Genovese was stabbed 14 times. Although she cried for help, reportedly, 38 bystander was not able to help her until it was too late. by muhammadnuradli Sep 18