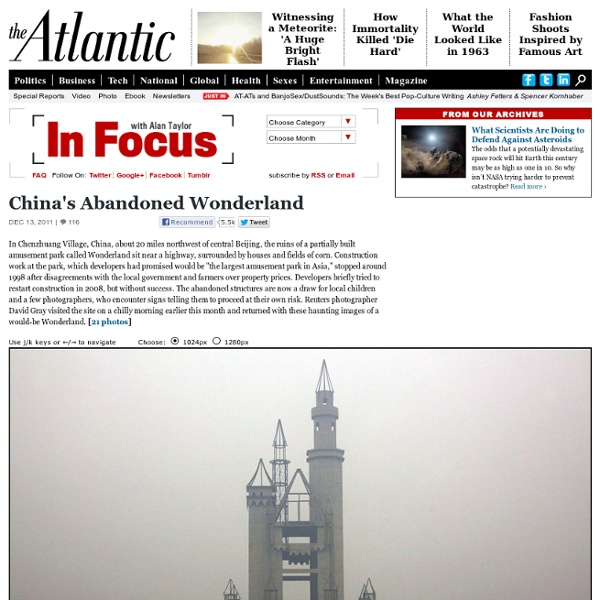 In Chenzhuang Village, China, about 20 miles northwest of central Beijing, the ruins of a partially built amusement park called Wonderland sit near a highway, surrounded by houses and fields of corn. Construction work at the park, which developers had promised would be "the largest amusement park in Asia," stopped around 1998 after disagreements with the local government and farmers over property prices. Developers briefly tried to restart construction in 2008, but without success. The abandoned structures are now a draw for local children and a few photographers, who encounter signs telling them to proceed at their own risk. Reuters photographer David Gray visited the site on a chilly morning earlier this month and returned with these haunting images of a would-be Wonderland. [21 photos] Use j/k keys or ←/→ to navigate Choose: Footsteps in fresh snow are seen across a walkway leading to the entrance of Wonderland, a derelict amusement park northwest of Beijing, on December 5, 2011.

Abandoned Six Flags in New Orleans I met fellow explorers Mike Rosati and Minda Vermazen for the first time in the Las Vegas Airport, en route to New Orleans to photograph the abandoned Six Flags Theme Park that closed when Hurricane Katrina struck in August 2005. We read online that the park was being dismantled and sold for scrap beginning in January 2011, so with little time to spare, we hastily made plans to visit during the first week of December 2010. Our plane landed around midnight, and we drove straight to the park on a cursory scouting mission. Top 100 April Fool's Day Hoaxes Of All Time Top 100 April Fool's Day Hoaxes of All Time As judged by notoriety, creativity, and number of people duped. On March 31, 1989 thousands of motorists driving on the highway outside London looked up in the air to see a glowing flying saucer descending on their city. Many of them pulled to the side of the road to watch the bizarre craft float through the air.

8 Abandoned American Theme Parks “Open” for Exploration Amusement parks walk the fine line between fun-ish and semi-creepy. Maybe it’s the combination of sketchy rides, circus folk, questionable attractions, and way too many screaming kids, but there’s something a little unsettling about them. Add an ill-advised theme into the mix, and you’ve got a real summer-time winner. Although for most of the 20th century amusement parks were a staple of American culture, the shine is definitely off the bumper car. 30 Stunning and Inspirational Comic Covers In the past it was rejected as a secondary form of art, the 20th century transformed comics into a mass medium. From comic strips to graphic novels, the gender has increasingly grown in number of publications and popularity. With the expansion of the gender came the necessity of creating covers that look amazing and attract new readers.

About Us NESbox is an emulator of NES, Super Nintendo, Sega Mega Drive video consoles, built on Adobe Flash technology and it can only be run directly in your browser's window. View on GitHub What can I do on the website now? Free CV templates - downloadable CV samples We know writing a CV can be a confusing task. But our free templates are designed to take the pain out of writing your job application. Our free templates will help you write a professional CV whatever your circumstances. So whether you’re unemployed, a recent graduate, looking for your first job or looking to climb the career ladder, we’ve got templates specifically designed for you.