How do you speak 'Motherese'? 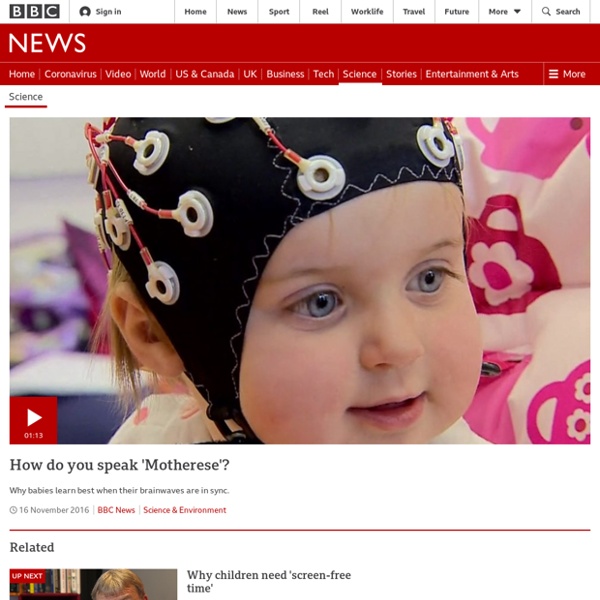 The Power of Evening Routines The word “structure” can evoke less than positive associations. It suggests constraints, which are never a good thing, right? Wrong. MIT Brain Study: Back-And-Forth Talk Key To Developing Kids' Verbal Skills New MIT research finds that for children's brain development, parents don't just need to talk to their kids — it's important to talk with them, in back-and-forth exchanges. "What we found is, the more often parents engaged in back-and-forth conversation with their child, the stronger was the brain response in the front of the brain to language," said cognitive neuroscience professor John Gabrieli. Story continues below Most Viewed Stories

Early childhood development – it’s not rocket science, it’s neuroscience! I was introduced to Mine Conkbayir when she contacted me about neuroscience informing early years practice, which I think is such an exciting, and growing, area of study. So I was very enthusiastic when she offered to do a guest post on this subject. Here she discusses how neuroscience can add another dimension to our understanding of child development: Like many individuals in this increasingly frantic world, I’m often busy juggling my responsibilities as a parent while I work and continue my studies – a very exciting journey as I try to achieve my PhD in early childhood education and neuroscience.

End of week 1 - English in Early Childhood - British Council Accents are things that only other people have. They are, by extension, things that you don’t want to have. Accents are, in short, shortcomings. FAQ: Raising Bilingual Children Why want bilingual children? There are many reasons, but the two most common are: 1) The parents speak different languages (say, an American woman and a Turkish man). The Brain-Changing Power of Conversation The Science Researchers used highly faithful audio recorders — a system called Language Environment Analysis (known as LENA) — to capture every word spoken or heard by 36 4–6 year olds from various socioeconomic backgrounds over two full days. The recordings were analyzed to measure the number of words spoken by each child, the number of words spoken to each child, and the number of conversational turns — back-and-forth exchanges initiated by either adult or child. Comparing those measurements with brain scans of the individual children, the analysis found that differences in the number of conversational turns accounted for differences in brain physiology, as well as for differences in language skills including vocabulary, grammar, and verbal reasoning. Read the MIT News story for a fuller summary of the research. The Takeaways

Listen to Your Mother Young children face a remarkable challenge in learning to use the language of their culture. Toddlers vary widely, however, in the rate at which they learn new words.1 A team of Harvard Graduate School of Education researchers set out to ask whether and how children's language environment can impact vocabulary development. In their study of mother-child pairs from low-income families, they found that mothers who used many different words (not just many words) had toddlers with faster growth in vocabulary use. During the toddler and preschool years, most children learn to use hundreds of words, combining them into sentences and engaging in conversation with others. From previous research, we know that variation in vocabulary growth relates to child characteristics like gender, and also to parental factors. What did they find?

End of week 1 - English in Early Childhood - British Council What do babies need in order to learn and thrive? One thing they need is conversation — responsive, back-and-forth communication with their parents and caregivers. This interactive engagement is like food for their developing brains, nurturing language acquisition, early literacy, school readiness, and social and emotional well-being. A dispiriting number of children don’t get that kind of brain-fueling communication, research suggests.