This blog is devoted to stuff that white people like 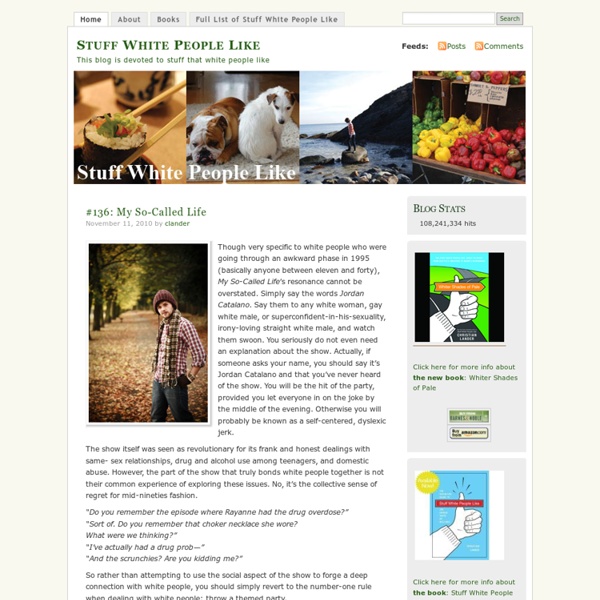 djmick V2: All Things Sexy & Cool July 29th, 2016 I Like The Look Of This Hacklberg Hottie If you stopped by Witches last night for the B3 Bavarian Beer Buffet you’d have been greeted by the stunning Hacklberg hottie featured in this gallery. No... 15 Things Highly Confident People Don't Do Highly confident people believe in their ability to achieve. If you don’t believe in yourself, why should anyone else put their faith in you? To walk with swagger and improve your self-confidence, watch out for these fifteen things highly confident people don’t do. 1. They don’t make excuses. Highly confident people take ownership of their thoughts and actions. How To Waste Time Properly - Issue 7: Waste Ever since Frederick Winslow Taylor timed the exact number of seconds that Bethlehem Steel workers took to push shovels into a load of iron ore and then draw them out, maximizing time efficiency has been a holy grail of the American workplace. But psychologists and neuroscientists are showing us the limits of this attitude: Wasting time, they say, can make you more creative. Even seemingly meaningless activities such as watching cat videos on YouTube may help you solve math problems. Brent Coker, who studies online behavior at the University of Melbourne in Australia, found that people who engage in “workplace Internet leisure browsing” are about 9 percent more productive than those who don’t. Last year, Jonathan Schooler, a psychology professor at the University of California, Santa Barbara published with his doctoral student Benjamin Baird a study called Inspired by Distraction. Schooler isn’t alone in his conclusion.

101 Short Stories that Will Leave You Smiling, Crying and Thinking post written by: Marc Chernoff Email Since its inception eighteen months ago, our sister site Makes Me Think (MMT) has truly evolved into a remarkable online community. Every day, users share their thought-provoking life stories and vote on stories that other users have shared. What Emotional Intelligence Reveals About Your Personality If you're new here, you may want to receive notices of new blog posts via email. Thanks for visiting - LaRae. As an FBI counterintelligence agent, the key to recruiting a foreign spy to work for the U.S. government was forming an accurate assessment of their personality. Once I understood their personality traits, I could move forward with confidence that I had everything I needed to craft a successful approach. Forming a personality assessment allowed me to understand the foreign spy better than he understood himself.

Stop Stealing Dreams (the entire manifesto on the web), cleaned up HTML version - Stop Stealing Dreams Feel free to read and share. But don’t edit or charge for it. If you'd like the other editions, including a handy PDF on-screen edition, click here. [Thanks to Dale for creating this version that makes it easy to link to a specific section.

6 Things Shy People Can Teach Us About Success Chances are we’ve all experienced a bout of shyness in our lives, whether it’s when we've walked into a party full of strangers or tried to shine in a job interview. And if you identify as a shy person, you’re definitely not the only one -- approximately 40 percent of American adults feel the same way. And yes, shyness has been associated with negative outcomes -- characteristics like difficulty maintaining eye contact, feelings of humiliation and sometimes even detachment are all known to be part of a shy person's M.O. It's these traits that tend to affect some shy individuals' ability to connect, says C.

You the User - You and your job You and your job In jobs, notebook, solutions on 4 October 2010 “The role of a manager should be to ensure that those that work for him/her eventually leave and go onto bigger and better things” Mark Plant How to be disruptive: a retrospective primer, with meerkats. ‘Disruptive’ doesn’t mean what it used to mean. Being disruptive used to mean you’d be in trouble pretty soon: with your teachers, your parents; with other kids’ parents. You know — grown-ups. Back then, being disruptive was seen as bad, and not something that would get you very far in life, beyond maybe the head teacher’s office. Finite Attention Span One Friday in May of 2011, I locked up my shared office, went to the pub with some colleagues and students, and said goodbye to my job as a senior lecturer in psychology. On the following Tuesday (it was a bank holiday weekend) I started a three-month stint as an intern at a then-mid-sized software company. They were pretty clear that there wouldn’t be more work at the end of it; all I had going for me was that they were paying me — a lot less than my academic job paid, but hey, it was money. (Let’s not even start on the ridiculous exploitation of young people by companies looking for free labour, or how unpaid internships exclude those who can’t afford to work for free.)

The science behind optimizing a productive work environment 1.9K Flares Filament.io 1.9K Flares × I’ve written about how creativity works in the brain before, and I found it really useful to understand this process. Or, I should say, multiple processes. There’s so much going on in the brain during creativity that science is still trying to pin down exactly how it all works.