How Covid-19 Signals the End of the American Era 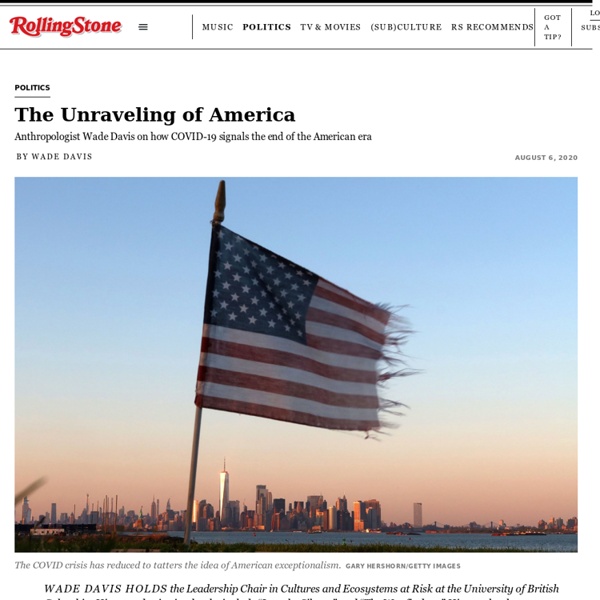 Wade Davis holds the Leadership Chair in Cultures and Ecosystems at Risk at the University of British Columbia. His award-winning books include “Into the Silence” and “The Wayfinders.” His new book, “Magdalena: River of Dreams,” is published by Knopf. Never in our lives have we experienced such a global phenomenon. For the first time in the history of the world, all of humanity, informed by the unprecedented reach of digital technology, has come together, focused on the same existential threat, consumed by the same fears and uncertainties, eagerly anticipating the same, as yet unrealized, promises of medical science. In a single season, civilization has been brought low by a microscopic parasite 10,000 times smaller than a grain of salt. Our interventions to date have largely focused on mitigating the rate of spread, flattening the curve of morbidity. Pandemics and plagues have a way of shifting the course of history, and not always in a manner immediately evident to the survivors.

Gilead Is Profiteering Off a COVID Drug We Already Paid For – BillMoyers.com FOSTER CITY, CALIFORNIA - APRIL 29: A sign is posted in front of the Gilead Sciences headquarters on April 29, 2020 in Foster City, California. Gilead Sciences announced preliminary results of a drug trial with that showed at least 50% of patients with coronavirus that treated with a five-day dosage of remdesivir improved and more than half were released from the hospital within two weeks. (Photo by Justin Sullivan/Getty Images) This is a story of cause and effect — a tale of repeated and calculated public policy decisions that have now led to a predictable outcome. This story begins 25 years ago, when the Clinton administration rescinded a rule that required pharmaceutical companies to charge Americans reasonable prices for medicines developed at government expense. Some progressive lawmakers tried to reinstate the rule, but Republicans and Democrats joined together to halt those initiatives.

Greece has a deadly new migration policy – and all of Europe is to blame A vital part of international refugee law is the principle of non-refoulement: the idea that states should not push people seeking asylum back to unsafe countries. In a country like the UK, which does not sit next to a war zone, advocates of “tougher” policies to deter asylum seekers will claim that the principle does not apply, since people who reach Britain’s shores will have passed through several peaceful countries before they get there. But if every country looks only to its own interests, and behaves as if asylum seekers are someone else’s problem, then you very quickly end up with a system that traps people in situations where their lives are at risk. That is the system bequeathed by Europe’s panicked response to the 2015 refugee crisis, and in recent months, partly under cover of the emergency conditions imposed by the coronavirus pandemic, it has got worse. Yet Europe’s governments seem to be in denial about where their policies might lead.

Willie Nelson and Paul Simon: Save Texas Hill Country and stop the Permian Highway Pipeline The Texas Hill Country is a gift from Mother Nature. Sprawling over 986 square miles in the heart of the state, it is a wonder of rolling grasslands, pastures of pecan, mesquite, desert willow and oak. Fields of bluebonnet, the state flower, line the highways. The region is a pristine, bio-diverse ecological gem, one of the most treasured landscapes of the American Southwest. But the pride and lifeblood of this unique part of the world are the granite and karst features, the thousands of underground streams and aquifers that hold groundwater and course like veins.

'This is a war': Republicans ramp up bid to control election maps for next decade A little-known Republican group is ramping up millions of dollars in funding from major US corporations such as CitiGroup and Chevron to protect the conservative stronghold on the country. The Republican State Leadership Committee (RSLC) – which held the key to the GOP’s political takeover a decade ago – launched the Right Lines 2020 campaign last September, taglined: “Socialism starts in the states. Let’s stop it there, too.” It’s hoping to meet a $125m investment goal in an effort to retain 42 state legislature seats that the group says are key to holding power in the House of Representatives in battleground states including Wisconsin, Texas, Florida and New York. “There’s a decade of power and a decade of dominance that’s truly on the line,” RSLC president Austin Chambers, a 24-year-old Republican operative, told Sean Spicer on his Newsmax show in March.

Banksy funds refugee rescue boat operating in Mediterranean The British street artist Banksy has financed a boat to rescue refugees attempting to reach Europe from north Africa, the Guardian can reveal. The vessel, named Louise Michel after a French feminist anarchist, set off in secrecy on 18 August from the Spanish seaport of Burriana, near Valencia, and is now in the central Mediterranean where on Thursday it rescued 89 people in distress, including 14 women and four children. It is now looking for a safe seaport to disembark the passengers or to transfer them to a European coastguard vessel. The crew, made up of European activists with long experience in search and rescue operations, had already assisted in two other rescue operations involving a total of 105 people, who are now onboard the NGO vessel Sea-Watch 4. Painted in bright pink and featuring Banksy artwork depicting a girl in a life vest holding a heart-shaped safety buoy, the Louise Michel sails under a German flag. “Hello Pia, I’ve read about your story in the papers.

Top Obama Health Official: U.S. Can 'Virtually Eliminate' COVID-19 When 'We Decide To' The former acting administrator of the Centers for Medicare and Medicaid Services under President Barack Obama went viral with an extensive Twitter thread over the weekend that explains how the United States can “virtually eliminate” the coronavirus “any time we decide to.” Andy Slavitt shared a 38-tweet thread in which he broke down what would have to be done around the country in order to “manage the illness.” In a matter of four to six weeks, he said, the U.S. could “throw the kitchen sink at COVID-19,” and listed everything that can be done to combat the spread of the virus.

Bully, coward, victim? Inside the sinister world of Trump mentor Roy Cohn Back in 2004, with the documentary Heir to an Execution, Ivy Meeropol began the decades-spanning project of exorcising the demon haunting her family. The Academy-shortlisted film sheds some light on the dark heritage of the Meeropol kids, descended as they are from Julius and Ethel Rosenberg, the couple executed by the United States government in 1953 having been convicted of sharing military secrets with the Soviet Union. When not teaching as an economics professor, Ivy’s father Michael spent most of his adult life on a crusade to restore and advocate for the reputation of his late parents, after years of defamation from the sinister prosecutor in the case Roy Cohn. Ivy’s film-making brought some elusive semblance of closure to this process – until, that is, early November 2016. “That made me resistant to tackling his story, even though I was fascinated and compelled by him and I certainly had this unique perspective.

Are hurricanes getting stronger – and is climate breakdown to blame? What is a hurricane, exactly? A hurricane is a large rotating storm that forms over tropical or subtropical waters in the Atlantic. These low pressure weather systems draw upon warm water and atmospheric moisture to fuel their strength and will gather pace if not slowed by patches of dry air, crosswinds or landfall. “They are very tall towers of winds that move at the same speed, sometimes 60,000ft tall,” says Jim Kossin, a scientist at the US National Oceanic and Atmospheric Administration. “If they are unmolested by wind shear or run over land they will continue on their merry way.”