Documenting the Engrish phenomenon from East Asia and around the world! 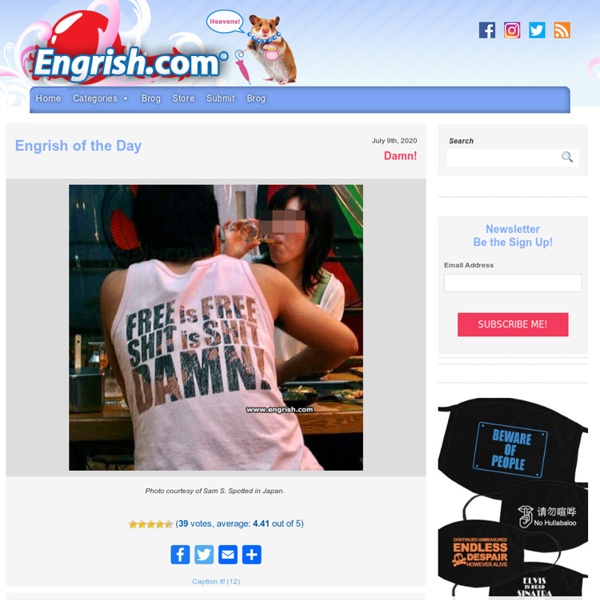 People are sharing “jokes that are so stupid that they’re funny” and they’re COMPLETELY RIGHT Over on Reddit Aweseom_ has asked “What’s a joke that’s so stupid it’s funny?” and there’s been over 9,616 comments in less than a week, and the results are superb. And we’ve gone though it with fine-tooth comb only selecting the very best for you, read readers, for you. I recently bought some shoes from a drug dealer. I don’t know what he laced them with, but I’ve been tripping all day. * * * Fish swimming upriver and bumps his head.

Lost in Translation - Cross-language computer translation "Language is the source of misunderstandings." — Antoine de Saunt-Exupéry in The Little Prince Important: Systran, which for years provided our translation functionality, shut down their service in May. We're now using Google Translate. Unfortunately, the Google Translate API has been officially deprecated as of May 26, 2011. Google's API will be shut off completely on December 1, 2011. Therefore, barring the emergence of new, publicly-available machine translation API, this site will disappear on December 1, 2011. Videos Smosh Video about 8 hours ago Ian and Anthony want to have adventures like Finn on Adventure Time, so they head out and FIND adventure on their own. Saving princesses and challenging villains looks so easy in the cartoon! Funny behind the scenes moments, bloopers, deleted scenes, amazing slow-motion destruction, and more funny extras from Smosh’s Adventure Time video! 4 days ago

Manvotional: 4 Rules on How to Make the Most of Life “How to Make the Most of Life” From Every-day Religion, 1886 By James Freeman Clarke Some persons make a great deal of life; others very little. To some it is intensely interesting; to others, very vapid. Some are tired of life before they have begun to live. They seem, as has been said, to have been born fatigued. Nothing interests them. ZooBorns: Kiwi New Zealand’s Pukaha Mount Bruce received an early Christmas present when their third white Kiwi chick hatched at the national wildlife center. North Island Brown Kiwis with white plumage are extremely rare. This chick is the third white Kiwi ever born in captivity, according to center officials.

Erotica Written By An Alien Horrified By The Human Body “They mutually thrashed their softest, most vulnerable parts about in a horrifying normal attempt to seek pleasure at the other’s expense.” “Their mouths, which mere minutes before had been employed in the process of demolishing and ingesting various foodstuffs, were now jammed up damply against one another while still being used for breathing, which must have been more than a little uncomfortable.” “Bits of one jammed into bits of the other, dangerously close to some of the weakest and most important internal organs.” “With absolutely no regard for personal space, the two of them created an unnecessary amount of friction, generating sweat in the process.”

Kenny Translator - translate text into Kennyspeak <p>Unfortunately, your browser is not configured for running JavaScript software, so the Kenny Translator won't work for you. Sorry! :(</p><p>Please ensure you have JavaScript enabled in the preferences menu on your browser (JavaScript is supported by Safari, Firefox, Opera 3.21+, Netscape Navigator 3+, and Internet Explorer 3+). The 5 Most Wildly Illegal Court Rulings in Movie History The Crime: Murder The Ruling: Not Guilty by Reason of Independent Investigation by the Jury. This is the classic courtroom movie, based on an equally famous play. 12 Angry Men follows the deliberation of a jury on a case we never get to see in the courtroom -- we spend the whole story with the members of the jury. The case they're examining involves a young man accused of killing his father. "Take the Xbox and see what happens, fucker."

Check out my cool home design on Autodesk Homestyler! © 2013 Autodesk, Inc. All rights reserved. Use of the service is subject to the Homestyler Terms of Use. Trademarks