The Lord of the Rings Family Tree Project - dozwolony użytek 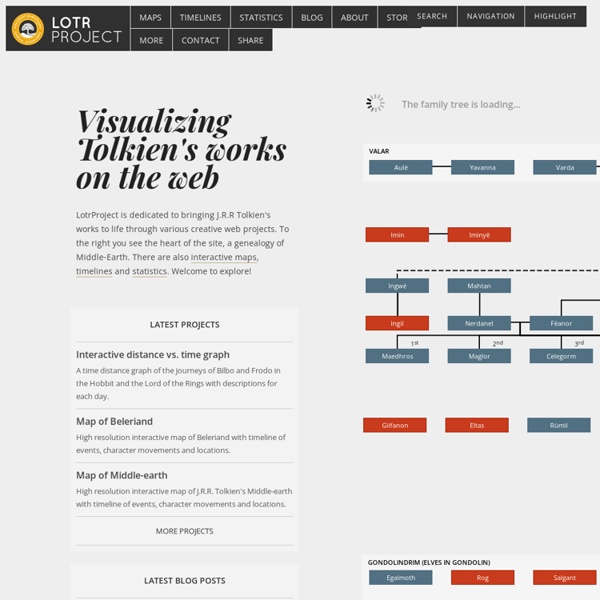 Visualizing Tolkien's works on the web LotrProject is dedicated to bringing J.R.R Tolkien's works to life through various creative web projects. To the right you see the heart of the site, a genealogy of Middle-Earth. There are also interactive maps, timelines and statistics. Welcome to explore! LotrProject is a work in progress.

Tolkien's Prose Style and its Literary and Rhetorical Effects While J.R.R. Tolkien's prose style in The Lord of the Rings has been both attacked and defended, its details have seldom been analyzed in terms of specific aesthetic effects. This lacuna in Tolkien criticism is certainly understandable, given the perceived necessity of first defending Tolkien's work as a worthy object of serious literary (rather than sociological or pop-cultural) study: critics have spent much effort countering ill-informed and even logically contradictory claims about Tolkien's work, and the discussion of writing style has had to be given short shrift in the effort to make the study of Tolkien academically respectable. But the analytical neglect of Tolkien's prose style has had the unfortunate effect of ceding important ground to Tolkien's detractors, who, with simple, unanalyzed quotations, point to some word or turn of phrase and, in essence, sniff that such is not the stuff of good literature. But lo!

TolkienWiki: FrontPage The Compendium Pages: Descriptions of the names, persons, places, things in Middle-earth and Arda, some are brief, some are longer, but they are - hopefully - always accurate (If we made a mistake somewhere, please let us know). The Compendium The Essays: Essays and Summaries about Middle-earth, Arda or Eä and related topics The Essays The FAQ Pages: Questions and answers about Tolkien's legendarium An Interview with Tom Shippey TURGON'S BOOKSHELF: An Interview with Tom Shippey [This interview with Tom Shippey appears courtesy of Houghton Mifflin Company. It is part of the publicity packet to promote Shippey’s new book, J. How do we say (…) in Quenya? There are some unchangeable truths about Quenya: it’s Tolkien’s masterpiece, it’s superbly well-done, it’s beautiful and it’s limited! Due to its vocabulary limitation, I announce here the beginning of my compilation of the NEW QUETTAPARMAR. Am I going to create words out of the thin air? No, no way!

Talking Tolkien With Tolkien Expert Professor Thomas Shippey by Claire E. WhiteThe Internet Writing Journal, March 2002 When Academy award-nominated New Zealand director Peter Jackson needed an expert to teach the cast of The Lord of the Rings how to pronounce all the words of the Elven languages there was only one man who could help: Dr. Thomas Shippey, well-known scholar, philologist and the world's foremost Tolkien expert. Professor Thomas Shippey is uniquely qualified to opine on all things Tolkien: he taught at Oxford University at the same time as J.R.R. Essay: Concerns of the White Council – Part 1 Concerns of the White Council By Ori’s Quill This essay is an analysis of the concerns of the White Council that is featured in An Unexpected Journey. It is one of a three part trilogy that shows the evolution of the Necromancer’s rise to power, and in the future essays explains the connection between Thorin’s ancestors and the One Ring. It is also an attempt to reconcile the literary works of J.R.R. Tolkien and An Unexpected Journey, but also to point out the discrepancies.

L'oeuvre d'une vie - <i>Le Seigneur des Anneaux</i> From The Nation, April 14, 1956. A review of The Fellowship of the Ring(Version originale) Oo, THOSE AWFUL ORCS ! The Tolkien Professor The Tolkien Professor at a Washington College graduation ceremony. Originally from southern New Hampshire, Corey Olsen, the Tolkien Professor, currently teaches in the English Department at Washington College, a delightful little liberal-arts college in Chestertown, on Maryland’s Eastern Shore. There he lectures in Chaucer, Arthurian literature, courtly love, the Bible, Greco-Roman mythology, and a full-semester course on the works of Tolkien.

How Tolkien triumphed over the critics The Fellowship of the Ring, the first instalment of JRR Tolkien's fantasy trilogy The Lord of the Rings, was published 50 years ago. But what did critics of the day make of the book? One of the most popular books in literary history it is also a regular winner of recent polls to find the nation's favourite novel - last year it topped the BBC's Big Read survey. Douglas A. (Douglas Allen) Anderson - Tom Shippey on J.R.R. Tolkien: A Checklist - Tolkien Studies 1:1 Books: The Road to Middle-earth London: George Allen & Unwin, 1982 [hardcover] Boston: Houghton Mifflin, 1983 [hardcover] London: Grafton, 1992 [trade paper, revised and expanded] London: HarperCollins, 1997 [trade paper] Boston: Houghton Mifflin, 2003 [trade paper; third revised edition] J. R. R.

Fitting Sense to Sound: Linguistic Aesthetics and Phonosemantics in the Work of J.R.R. Tolkien I. Sound and Sense "Linguistic aesthetics" is a term which Tolkien employed on a number of occasions to refer to the fickle relationship among the sounds of words, their meaning, and our emotional responses to them. archives.theonering How Elijah Wood learnt Elvish Xoanon @ 2:01 pm EST nina_glyndwr writes: This article is from Linguist, the magazine of the Institute of Linguists in London, UK Inside the raggedy plastic bag on the table is one of the most closely guarded secrets in Hollywood: the script for all three Lord of the Rings movies. Dialogue coach Andre Jack shouldn’t have brought it along, but he wants to show me how he taught Elvish to some of Hollywood’s biggest stars. I’m honoured. Once upon a time even the identity of the actors was shrouded in secrecy, and amongst the million-or-so Lord of the Rings fans around the world, there are those who would fight Sauron to get their paws on the original script.