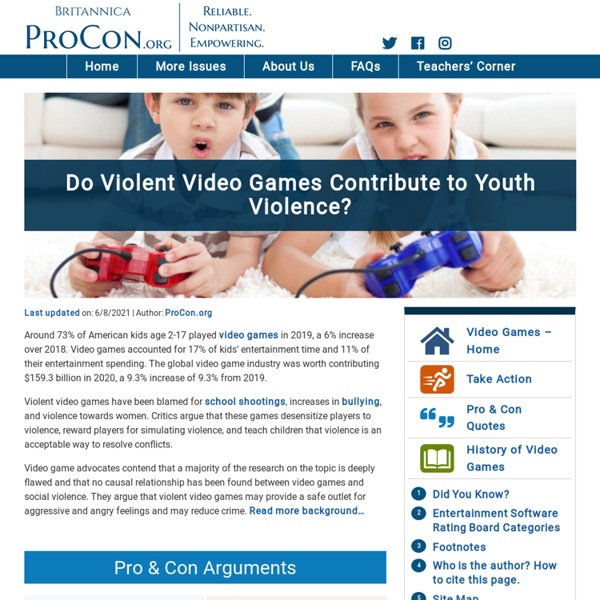 Violent Video Games Don’t Make Kids Violent, Study Finds Violence in video games has long concerned parents, who worry about the influence on impressionable minds of controversial games such as Grand Theft Auto. In many games, players score higher when they break the (virtual) law, behave violently toward others, and maximize the pain inflicted on other players. So pervasive is the idea that violent video games cause violent behavior that a 2010 survey found that 49% of adults believe that violent games can inspire some people to commit real-life atrocities. Violent Video Games Might Not Cause Violent Behavior Researchers interviewed about 200 10- and 11-year-olds about their video game-playing habits. Children who played video games for less than an hour each day showed lower rates of aggression than children who did not play at all—even when the games in question were violent ones. The Video Game Debate Rages On Researchers in the study were careful to point out that new technologies often inspire a moral panic. References:

Do violent movies, TV, video games really make kids violent? An advocacy group claims there is widespread support that television shows, movies and video games containing violent content can lead to increased aggression in children. The study was just published in the journal, Psychology of Popular Media Culture. The Parent's Television Council supports the findings and says its own research on violence has found shocking types of violent content rated as appropriate for 14-year-olds, just on primetime broadcast television alone. Melissa Henson, the director of grassroots education and activism for the Parents Television Council, says that the violence children view from different forms of electronic media clearly has a detrimental effect on them and the way they react to others in difficult situations. “It just reinforces the pathways that encourage violence is the solution, rather than a rational discussion,” Henson attests. Researchers suggest limiting screen time, monitor what children watch and have open communication.

Video Games: Violent, Yes. But Do They Make Us Violent? 51211How Parents and Policymakers Handle Violent Video GamesPBS NewsHour correspondent Jeffrey Brown taps into a discussion about the connections -- or lack of connections -- between violent video games and violent behavior. The Newtown killer reportedly spent hours playing such games, but is there any evidence that one thing leads to the other? Psychologist Brad Bushman of Ohio State University and public health expert Cheryl Olson weigh in. 2013-02-15 18:00:00disabledIdY7ehahp2M Psychologist Brad Bushman and public health expert Cheryl Olson weigh in on the impact of violent video games on behavior. Watch the full report on PBS NewsHour Tuesday. I remember some years back when I first walked into a video game store with my son, feeling amazed, overwhelmed and, yes, aghast. As one public health expert, Cheryl Olson, told us recently: “It’s true that the Newtown, Conn., shooter apparently played violent video games.

Watching violent films does make people more aggressive, study shows Their brains were scanned as they watched a succession of shootings and street fights on day one, emotional but non-violent scenes such as people interacting during a natural disaster on day two and nothing on day three. While watching violence the aggressive group had less activity in the orbito-frontal cortex, which controls emotion-related decision making and self-control. These subjects said they felt more more inspired and determined and less upset or nervous than their non-aggressive counterparts when watching violent instead of only emotional scenes. Their blood pressure also went down progressively while the calm groups' rose. During the final 'mind wandering' stage - when no films were shown - the aggressive participants had unusually high brain activity in a network of regions known to be active when not doing anything in particular. This suggests they have a different brain function map than their non-aggressive peers, said the researchers.