Smile! Could the pandemic lead to happier times? 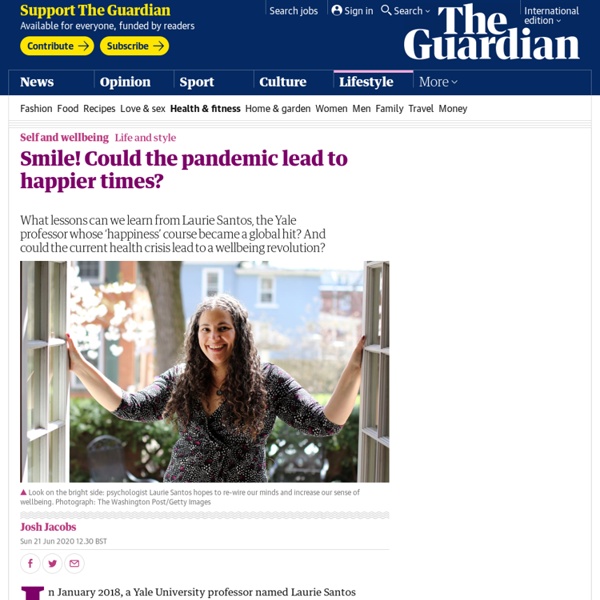 In January 2018, a Yale University professor named Laurie Santos launched a course, Psychology and the Good Life, which quickly became the most popular class in the institution’s 319-year-history. After 13 years at Yale, in 2016, the 44-year-old had taken charge of one of the university’s residential colleges and had become alarmed by widespread mental illness and stress. She wanted to explain the paradox of why so many students were still suffering, having achieved their dreams of being admitted to Yale and having met society’s definition of success. Santos created the lecture series in a bid to teach her students what really mattered – to help them carve out lives of meaning and contentment. Within a few days of the course’s launch, roughly a quarter of Yale’s entire undergraduate population had signed up. A few months later, in March 2018, Santos launched a 10-week online version of the original happiness course that anyone could access. Is it really possible to increase happiness?

Mom Asks Pediatrician About The Idea Of Kids Going To School Again, Receives A Reality Check As the back-to-school date in the US is slowly approaching, more and more parents are seriously doubting whether to send their kids to school. With Covid-19 infections rising in 41 states and southern hotspots already undertaking crisis measures on Thursday, many feel like reopening schools physically would be hurried and plain dangerous. So one mom and book author from Atlanta named Aesha Saeed turned to her children’s pediatrician for advice.

A field guide to Trump's dangerous rhetoric All leaders are demagogues. You may not realize this, because we’ve come to associate the word “demagogue” with only dangerous populist leaders. But in Greek, the word just means “leader of the people” (dēmos “the people” + agōgos “leading”). Some demagogues are good, and some are dangerous. The fundamental difference between leaders who are good demagogues and leaders who are dangerous demagogues is found in the answer to this simple question: Are they accountable for their words and actions? The Stock Market Is Near Correction Levels What if I told you the fastest stock market recovery in history is just a misunderstanding? You’ve probably seen headlines like this one: Or this one: Doesn’t it seem off that the stock market is blazing past record highs while the economy is in freefall? And at the same time a record 50 million Americans are sitting around without a job? It should.

What Do We Know About Children and Coronavirus Transmission? Key Points: With just a few weeks remaining before schools in the U.S. are scheduled to reopen, and the federal government encouraging in-person schooling, there remain many questions about the risk COVID-19 poses to children and their role in transmission of the disease. Indeed, other countries have not reopened schools with the levels of community transmission found in the U.S., coupled with its insufficient testing and limited contact tracing.Our review of the latest available data indicates that, while children who are infected with COVID-19 are more likely to be asymptomatic and less likely to experience severe disease (though a small subset become quite sick), they are capable of transmitting to both children and adults.What remains unclear and where evidence is still needed is: whether children are less likely to be infected than adults and, when infected, the frequency and extent of their transmission to others. Introduction Current Evidence on COVID-19 and Children Conclusion

Is This 'I'm Sorry I'm Late. I Had a Lot To Learn' Protest Sign Real? Rumors are surging in the wake of George Floyd’s death and resulting protests against police violence and racial injustice in the United States. Stay informed. Read our special coverage, contribute to support our mission, and submit any tips or claims you see here. In June 2020, an image supposedly showing a white demonstrator at a Black Lives Matter protest holding a sign reading “I’m Sorry I’m Late. I Had A Lot To Learn” went viral on social media: Many people sharing this image added comments commending this man for taking the time to learn about a subject, changing his views, apologizing, and then speaking out for his beliefs — for example, one commentator wrote: “This is a good man.

Does the coronavirus pandemic make someone who is disabled like me expendable? It is a strange time to be alive as an Asian American disabled person who uses a ventilator. The coronavirus pandemic in the United States has disrupted and destabilized individual lives and institutions. For many disabled, sick, and immunocompromised people like myself, we have always lived with uncertainty and are skilled in adapting to hostile circumstances in a world that was never designed for us in the first place.

Disability in kids: Private special education school without restraint 14-year-old Alex Campbell, who has autism, is one of the most powerful voices in the movement to better document and regulate restraint in schools. USA TODAY This story was produced by the Teacher Project, an education reporting fellowship at Columbia Journalism School. BETHLEHEM, Pa. – Twenty years ago, a visitor to Centennial School would have heard a cacophony. Republicans will replace RBG but Democrats hold the trump cards – no, really In 2005, while bragging about his history of sexual assault, a reality TV host laid out a simple theory of power. “When you’re a star,” Donald Trump explained to Access Hollywood host Billy Bush, “they let you do it.” Fifteen years later, Trump has gone from The Apprentice to the Oval Office, from grabbing women without their consent to picking a woman to replace Ruth Bader Ginsburg on the supreme court. Yet his approach to power has remained quite consistent.

Humans Are Animals. Let’s Get Over It. Every human hierarchy, insofar as it can be justified philosophically, is treated by Aristotle by analogy to the relation of people to animals. One might be forgiven for thinking that Aristotle’s real goal is not to establish the superiority of humans to animals, but the superiority of some people to others. “The savage people in many places of America,” writes Thomas Hobbes in “Leviathan,” responding to the charge that human beings have never lived in a state of nature, “have no government at all, and live in this brutish manner.” Like Plato, Hobbes associates anarchy with animality and civilization with the state, which gives to our merely animal motion moral content for the first time and orders us into a definite hierarchy. But this line of thought also happens to justify colonizing or even extirpating the “savage,” the beast in human form.

Encouraging pencils No matter who or how old you are, every one of us has those days when life just seems to be tougher than usual. And in those difficult moments, an encouraging word from someone who cares about you could be all you need to realize that everything is going to be alright. Kids are no exception. Revealing Photo Series Documents School Lunches Around the World Around 32 million children in the US eat cafeteria food every weekday, and most of these students consume over half their daily calories at school. With this in mind, it's clear that school cafeterias are becoming crucial in the fight against childhood obesity. Sweetgreen–a chain of salad restaurants that runs a Sweetgreen in Schools program to educate kids about healthy eating, fitness, and sustainability–decided to shed light on what constitutes a quality lunch by taking a look at typical school lunches around the world.

When the Serendipitously Named Lovings Fell in Love, Their World Fell Apart “My theory is, strong people don’t need strong leaders,” said human rights leader Ella Baker, who worked behind the scenes of the Black Freedom Movement for more than five decades. Her vision of participatory democracy was eloquently summed up in the composition “Ella’s Song,” written by Bernice Johnson Reagon, founding member of the music ensemble “Sweet Honey in the Rock.” Not needing to clutch for power, not needing the light just to shine on me I need to be just one in the number as we stand against tyranny.

30 Times Teachers Messed Up Big Time And Shared Their Fails Online It’s funny how most of us imagine a classroom to be the place where all the serious business happens. In reality, it’s where hilarity is turned up to the max—from funny typos on the board, to photocopying skills running errands, to plain absurd incidents that do happen more often than we’d like to think. But this time, we're gonna turn the cards around and let the teachers share their fair amount of awkwardly funny accidents that have happened at school.