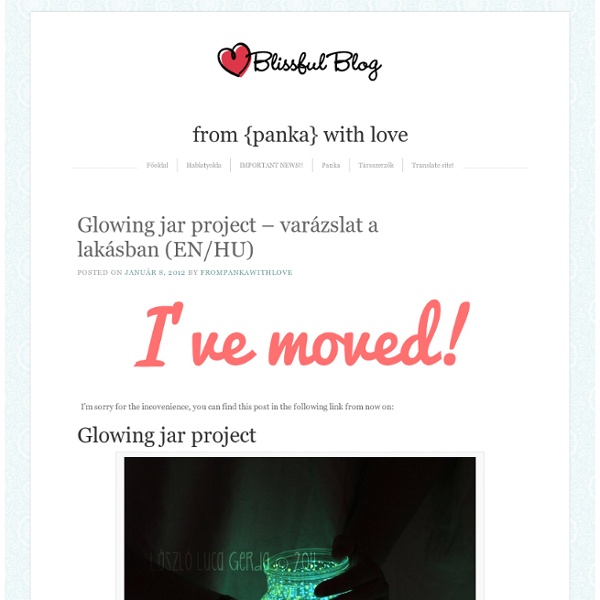 Perfect Summer Bangle Here's a fun tutorial on how to make a message bangle that's one-of-a-kind, done in the sun, waterproof and weatherproof. Even after several trips to the beach, it won't fade or wash off! Essentially, it's the Perfect Summer Bangle. Used in this tutorial: Inkodye Red Glowing Jar UPDATE: This post originally ran on March 23 2011, but with summer winding down we wanted to bring it back up for some late summer inspiration! a fellow fp girl sent this to me a couple weeks back and i’ve been thinking about it ever since! i can think of a million reasons why these would be awesome… as apartment décor, as outdoor party décor, and – wouldn’t they be the best thing EVER for camping in general or at a festival?

Wipe Off Weekly Menu Board I am a meal planner. I refuse to go grocery shopping without my week’s worth of meals planned out and list made. (It’s either that or wander aimlessly around the grocery store for two hours and then make ten more trips back during the week to get things I forgot.) Once I get the groceries unloaded, I usually forget what I planned for, so I put together this super easy wipe-off menu board to keep track of what’s for dinner each night!

The Humble Clothespin Let it Bring out the Artist in You Yeah, I know. No big whoop. However …. And once you have that you can form it into this … Re-purposing: Tshirts into 5-strand-braided-headbands I was walking through Target a few weeks ago and noticed this little knit fabric headband that was not just braided together…….but woven. I decided they were charging way too much for something that could be made with t-shirt scraps. And that means free. So there you have it. 25 Cool and Creative MacBook Stickers As much as I hate Apple and their often overpriced hardware, I do admit that their products look beautiful and can be used just like jewelry to make you look better. Heck, one of my friends even put an Apple logo sticker on her Dell laptop! *insert a facepalm image here*

Rock + Bowl + Flame 31 minute project You'll need: Sakrete Quickset Concrete a bunch of rocks (perhaps dug up from your yard) a plastic bowl a large canned good chafing dish gel fuel pack PAM cooking spray newspaper plastic tub for mixing concrete stick to stir concrete You are going to create one of these (which, FYI, Restoration Hardware doesn't sale anymore, hence why we are making our own) In pictures: For the readers: 1.

How to make boxes from paint swatches If you've got paint chips sitting around begging to be made into something, try folding them into boxes for paperclips, thumbtacks, party favor candies, or tiny gifts. I made these from Behr swatches, available at Home Depot. You'll need paint swatches, double-stick tape, an X-acto knife, ruler, and cutting mat.

Bottle (w)rap I drink a lot of wine. And end up with a lot of empty wine bottles that are oh so pretty, it breaks my heart to have to junk them with the raddi- walla. I've been trying to find all sorts of utility excuses to hang on to them - wate bottles, plant holders and what have you.