The future of teaching: Difference engine: Let the games begin 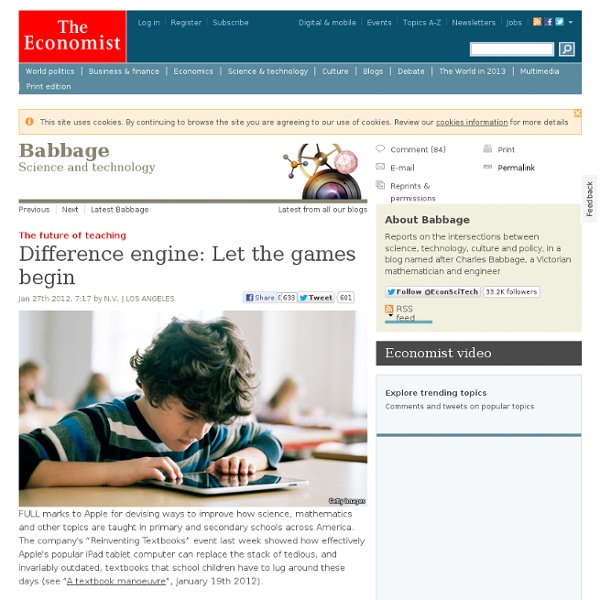 4 Reasons Your Brain Loves to Learn Online Are we offloading our brains onto the web? Are programs better than teachers at knowing what we know? Do virtual badges motivate more than grades? What is it about cartoon foxes that helps us learn to code? As you can read in our piece “How the Internet Revolutionized Education”, we’ve been tracking on-line education closely for some time now– talking to experts and keeping tabs on an industry that’s exploding as predicted. Over here at the science desk, recent developments on the learning brain are meshing with what we already know of the web’s power to teach.

Home Français Follow us E-mail Alerts Blogs What's new JAPAN: Half a century of OECD membership Harvard and MIT Put $60M in E-Learning Venture EdX Harvard and MIT have joined forces to launch the not-for-profit online learning venture edX, the two institutions announced today. Soon available at the open-source platform will feature free online versions of their classes and those of other universities. However, edX will be much more than a simple collection of videos. According to its creators, its purpose is to build a global community of online learners – hence the inclusion of wiki-based collaborative education. Additional features include self-paced learning, online discussion groups, assessment of training as a student progresses through a course, and online laboratories.

In 2011: How the Internet Revolutionized Education As connection speeds increase and the ubiquity of the Web pervades, free education has never been so accessible. An Internet connection gives lifelong learners the tools to become autodidacts, eschewing exorbitant tuition and joining the ranks of other self-taught great thinkers in history such as Albert Einstein, Alexander Graham Bell, Paul Allen and Ernest Hemingway. We can be learning all the time now, whenever we want, and wherever we want. The LIBOR scandal: The rotten heart of finance THE most memorable incidents in earth-changing events are sometimes the most banal. In the rapidly spreading scandal of LIBOR (the London inter-bank offered rate) it is the very everydayness with which bank traders set about manipulating the most important figure in finance. They joked, or offered small favours. “Coffees will be coming your way,” promised one trader in exchange for a fiddled number. “Dude.

The Stanford Education Experiment Could Change Higher Learning Forever Sebastian Thrun and Peter Norvig in the basement of Thrun's guesthouse, where they record class videos.Photo: Sam Comen Stanford doesn’t want me. I can say that because it’s a documented fact: I was once denied admission in writing. I took my last math class back in high school. Which probably explains why this quiz on how to get a computer to calculate an ideal itinerary is making my brain hurt. I’m staring at a crude map of Romania on my MacBook. Bringing the Information to the People Although digital divides between the world’s industrialized and developing areas loom large, development experts are finding ways to cross them. Research institutions such as the World Bank are making their libraries freely available to the global public; while governments and nonprofit groups deploy new open-source software, open-content tools, and wi-fi intranets to empower even the remotest villagers in Earth’s most underdeveloped zones to access data and work with it, or to create their own data and share it. “Democratizing Development through Wikipedia and Other Open Solutions,” a forum that the World Bank and Wikimédia France co-hosted Wednesday, July 11, at the World Bank headquarters in Washington, DC, explored these trends. The World Bank exemplifies the phenomenon. In April 2010, it made its data sets available online for free in six languages. Wikipedia is, of course, a pioneer in free online information.

Virtual Schools Booming As States Mull Warnings DENVER -- More schoolchildren than ever are taking their classes online, using technology to avoid long commutes to school, add courses they wouldn't otherwise be able to take – and save their school districts money. But as states pour money into virtual classrooms, with an estimated 200,000 virtual K-12 students in 40 states from Washington to Wisconsin, educators are raising questions about online learning. States are taking halting steps to increase oversight, but regulation isn't moving nearly as fast as the virtual school boom.

The Cassiopeia Project: Free Science Education Online by Maria Popova What a mysterious retired physicist has to do with the future of learning. In 2008, The Cassiopeia Project began quietly publishing high-definition videos exploring in an intelligent yet digestible manner nearly every corner of the science spectrum, and releasing them online for free. With more than 100 videos to date available on iTunesU and YouTube, the project offers an invaluable resource on everything from quantum mechanics to evolution to the theory of relativity — another wonderful piece in the ever-expanding puzzle of free educational content online that is changing how we think about learning. We believe that if you can visualize it, then understanding it is not far behind.” All the content is open-source and educators are encouraged to edit, remix and otherwise customize the footage.