Pour Happiness into the Hearts of Needy with your Donations: World Laughter Day 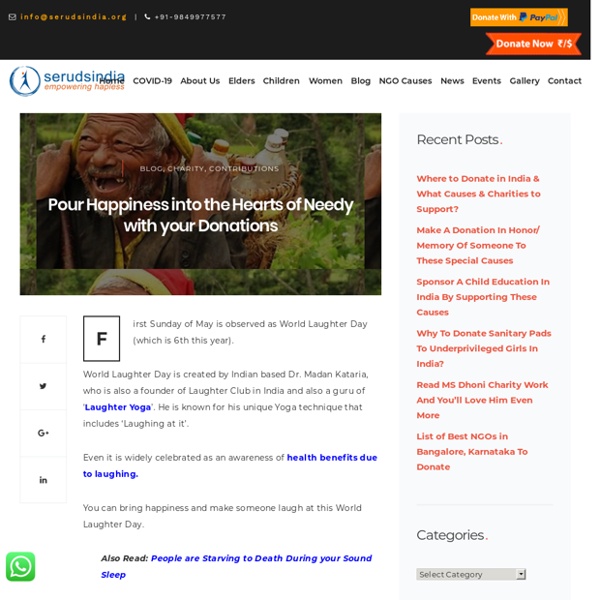 First Sunday of May is observed as World Laughter Day (which is 6th this year). World Laughter Day is created by Indian based Dr. Madan Kataria, who is also a founder of Laughter Club in India and also a guru of ‘Laughter Yoga’. He is known for his unique Yoga technique that includes ‘Laughing at it’. Even it is widely celebrated as an awareness of health benefits due to laughing. You can bring happiness and make someone laugh at this World Laughter Day. Also Read: People are Starving to Death During your Sound Sleep Before that, let’s laugh a little and brush up ourselves by taking a look at some of funniest gifs we found on the internet. Anonymous ball can land you in trouble. (Source: Buzzfeed) Funny isn’t it. Trending among users: Charity Work By SRK will Surely Inspire You There are many ways you can pour happiness into the hearts of the needy and make them laugh on World Laughter Day. In this tech-savvy world, we don’t have much time. We are open to suggestions, please comment below.

How Far Can You Go To Help People? Spiderman of Paris Went 4 Floors Mamoudou Gassama, Spiderman of Paris (given name) was recently applauded globally for his daring act of Climbing 4 floors building for saving a kid. Twitter went GAGA over his act and gave him a name ‘le Spiderman’ (Spiderman of Paris). A Malian Migrant who became an overnight sensation for his heroic gesture of saving a toddler who was hanging from the balcony, four floors high. It all started when Mamoudou observed crowd in chaos and a kid hanged up from the 4th floor. He went straight to the building climbing himself floor by floor and within a minute he was able to catch the kid and saving him from death. The heroic act was recorded and in a video clip showing 22-year-old ‘Spiderman of Paris’ climbing the storeys like a pro.

World’s Biggest Charity - 6 Year Old Donated his Piggy Bank World’s biggest charity is expected to have a huge amount, wealth, and assets involved right? Not really, sometimes, little gestures by any person can be an inspiring story enough to share and motivate. We encountered one such incident recently that melted our heart, we observed the world’s biggest charity. Disclaimer: In order to maintain confidentiality, the details such as the name of the boy. We had a visitor a few days ago, a schoolboy. He was around 6 yr old.

How You Celebrated Mother’s Day? - Seruds With Mother’s Day just bygone, you may be feeling happy the way you expressed your love for your mother. Whilst, some of us clicked selfie and published on social media and some carry a perspective of ‘every day should be a mother’s day. Whilst some people celebrate, some regard it as one of the regular days. And that’s total human to have a contrast of opinions. Be it anything, The Power Of You: You Can Change Lives - Seruds The ‘Power of you’ is a narrative blog written for self-realization. We always talk about the change we can make but lesser that we know about our power that can change the scenario of everything around. Is that me? Will I change the life of others? Yes. You only can change.

World Immunization Week: Donate for Children’s Health World Immunization Week is observed in the last week of April. It is an awareness campaign at a global level. Immunization is the medical process by which a person’s immune is resistant to the infectious disease, typically by the administration of a vaccine. It helps us from 25 diseases. Charity Work By Cristiano Ronaldo Will Make You His Fan Charity work by Cristiano Ronaldo is more impactful than his strike. Not only the most loved football player has a golden boot, but even his heart also has the Midas touch of gold. In this Blog: Let’s learn about the Christiano Ronaldo’s Charity Deeds which will make you his fan for sure. If you follow social media, we can see a huge number of posts that talks about his social work and we are quite sure that you might have encountered at least one for sure. We recently came across this post about Ronaldo’s Charity and decided that we shall publish an article showcasing his heart-melting charitable deeds.

“Don’t Sharp Pencil Much, We can’t Afford Another”: Donate Education Material - Seruds “Education is the key to eradicate poverty” Which is indeed true. There has been substantial decrease of poverty over past few years in India, and there are claims that if little more improvement is made by literacy rate in India, poverty can be resolved. But there are many rural and slum areas, where poverty is destroying education. Children from 5- 15 years of age who belong to school, are seen on roads playing and working as a child labour. We keep on chanting the word, ‘Right to education’ but many of the Indians can’t afford because education in India is very costly.

What Does Charity Begins at Home Means? We always hear the phrase ‘Charity Begins at Home’ and we take it as a regular proverb or quote. But if we dig a deeper meaning of it, it’s amusing and breath-taking. So, hold on till the end of the blog to understand what does charity begins at home actually means. Before that, we have a riddle, “I am an animal but not alive, I give my everything, almost broke myself to give you hope & happiness, I am always your backup, What am I?” (Find the answer in the bottom). History and Origin of the Phrase ‘Charity Begins at home’