Charity Work By Varun Dhawan is Bigger Than His Age: Seruds NGO India 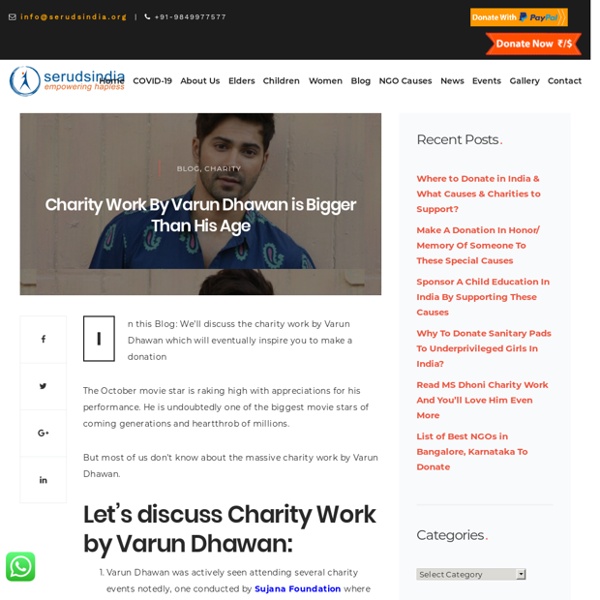 In this Blog: We’ll discuss the charity work by Varun Dhawan which will eventually inspire you to make a donation The October movie star is raking high with appreciations for his performance. He is undoubtedly one of the biggest movie stars of coming generations and heartthrob of millions. But most of us don’t know about the massive charity work by Varun Dhawan. Varun Dhawan was actively seen attending several charity events notedly, one conducted by Sujana Foundation where the actor was seen to offer trophies and also he spent a lot of quality time with those children. He is very fond of children and as per India times, he is always ready to visit NGOs and events where he is invited.As per TOI, Varun Dhawan has donated his favorite Golden jacket (which he wore in Dishoom) for a huge amount to raise fund for the underprivileged.During his shoot for Humpty Sharma Ki Dulhania, one of his fans got injured. Varun has turned 30 now. So, this was the charity work by Varun Dhawan.

How Far Can You Go To Help People? Spiderman of Paris Went 4 Floors Mamoudou Gassama, Spiderman of Paris (given name) was recently applauded globally for his daring act of Climbing 4 floors building for saving a kid. Twitter went GAGA over his act and gave him a name ‘le Spiderman’ (Spiderman of Paris). A Malian Migrant who became an overnight sensation for his heroic gesture of saving a toddler who was hanging from the balcony, four floors high. “Don’t Sharp Pencil Much, We can’t Afford Another”: Donate Education Material - Seruds “Education is the key to eradicate poverty” Which is indeed true. There has been substantial decrease of poverty over past few years in India, and there are claims that if little more improvement is made by literacy rate in India, poverty can be resolved.

World Immunization Week: Donate for Children’s Health World Immunization Week is observed in the last week of April. It is an awareness campaign at a global level. Immunization is the medical process by which a person’s immune is resistant to the infectious disease, typically by the administration of a vaccine. It helps us from 25 diseases. As per WHO, World Immunization Week (campaign) protects approximately 2- 3 million deaths every year, which is remarkable but there are still 22 million infants who didn’t get even basic Vaccines in countries like India and Bangladesh.

The Power Of You: You Can Change Lives - Seruds The ‘Power of you’ is a narrative blog written for self-realization. We always talk about the change we can make but lesser that we know about our power that can change the scenario of everything around. Is that me? Pour Happiness into the Hearts of Needy with your Donations: World Laughter Day First Sunday of May is observed as World Laughter Day (which is 6th this year). World Laughter Day is created by Indian based Dr. Madan Kataria, who is also a founder of Laughter Club in India and also a guru of ‘Laughter Yoga’.

Charity Work By Cristiano Ronaldo Will Make You His Fan Charity work by Cristiano Ronaldo is more impactful than his strike. Not only the most loved football player has a golden boot, but even his heart also has the Midas touch of gold. In this Blog: Let’s learn about the Christiano Ronaldo’s Charity Deeds which will make you his fan for sure. If you follow social media, we can see a huge number of posts that talks about his social work and we are quite sure that you might have encountered at least one for sure. We recently came across this post about Ronaldo’s Charity and decided that we shall publish an article showcasing his heart-melting charitable deeds. The Real Madrid superstar has an endless list of charity work. Believe us, Akon Lighting Africa is Helping 600 Million People In this Blog: Let’s discuss How Akon is working for the betterment of Africa with his organization, ‘Akon Lighting Africa’ “I wanna make up right now na na… I wanna make up right now na na…

What Does Charity Begins at Home Means? We always hear the phrase ‘Charity Begins at Home’ and we take it as a regular proverb or quote. But if we dig a deeper meaning of it, it’s amusing and breath-taking. So, hold on till the end of the blog to understand what does charity begins at home actually means.