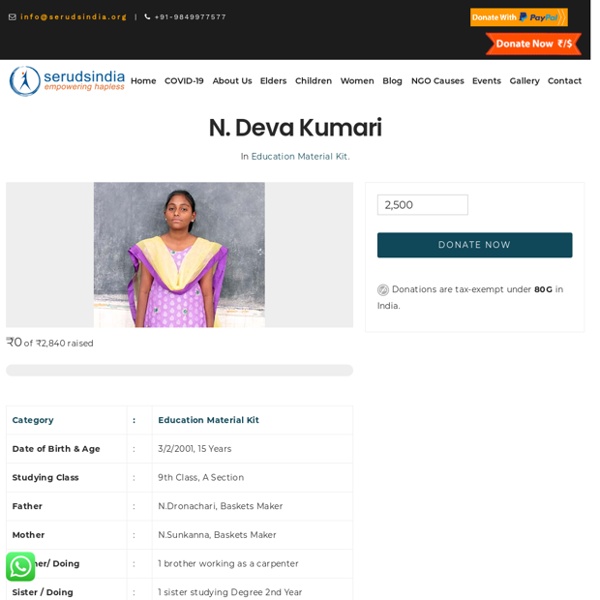 V. Kaveri - Seruds Mother works as a daily wage agriculture labour in Cement Nagar, Nandyal Mandal, Kurnool District. Her father works as a lorry cleaner, truck driver, migrant labour. Whatever he earns he did not spend for the family, but he takes Alcohol with that money. Whenever he did not get work he won’t get money to drink so he will demand his wife for money, but hardly he is providing normal food to the family. So she fails to give always angrily he used to beat her severely and began to sell whatever house hold things available in that vessels, clothes etc. Meanwhile, he habituated to bad habits and always drinks cheap liquor. E. Lingeswari - Seruds Lingeswari is an eleven year’s old girl. Her parents were labourers. But her father was drunken. He used to spend his earning on cheap liquor only. So Lingeswari mother suffers a lot to maintain the family needs.

Robert Downey Jr Charity: Here’s How Much the Iron Man Star Donates In this blog: Let’s learn the immense charity work by Robert Downey Jr. His contribution towards society for various social causes is impeccable. “And I am… Iron Man…..” Gosh we know it’s not just a line, it’s an emotion. Many of us just identify him with the name Tony Stark. Since he finally ended his journey with MCU, here’s a small tribute to Robert Downey Jr. Narsipalli Venkatasubbaraju - Seruds Subbaraju parents were living in Palukuru village near Kurnool. When Subba Raju was a small boy his father ran away with another lady, leaving behind his wife and children for their own fate. Even when he was living with his family his father never bothered about the family. His mother Devi used to go for work and fed her two children. She married her daughter with a lot of difficulties and had to save every penny she could for the marriage.

Charity VS Philanthropy - Meaning, Differences & Explanation Charity vs Philanthropy, What’s the difference between these two words which are quite often used as synonyms. The differences and the explanation of Charity and Philanthropy are what we’ll learn in this blog. Eyes up on our most popular blog: Cristiano Ronaldo’s Inspiring Charity work We mention a lot of people are philanthropists (mostly celebrities) and we think “oh these people do a lot of charity”, but hang on as we take you on a merry-go-round whilst explaining the difference between the concept of Charity and Philanthropy. Charity Vs Philanthropy: Meaning The concept of charity means the help done to the needy by providing means of necessities either money or food or any other required thing.

Namula Sumanth - Seruds Sumanth is an innocent calm child. His parents were used to work as daily wage labourers in agriculture fields. They used to suffer a lot to meet the family day to day needs. When he was small his father died in a lorry accident during his vocation on the way to sirivella village. Later after some days his mother also passed away in an auto accident while coming home from the agriculture work.

Charity Work By Mukesh Ambani Larger Than Your Imagination In this Blog: Let’s learn the charity work by Mukesh Ambani which is quite larger than the majority of people’s lifetime earning. His list of social work is as big as his business empire. It’s true that Asia’s richest man is always in the news say it his new business venture or a lavish eco- friendly wedding of his son, Mukesh Ambani is always in news but not much for his immense charity work. Most Viewed Article: Celebrities donated Crores for Kerala Relief Floods No, we are not talking about the free internet given by JIO, owned by Mukesh Ambani. Lol, we mean actual charity. P. Shivamani - Seruds Shivamani parents were daily wage labourers and they have three children. The income they were getting is very less and it was not at all sufficient for the family needs. Shivamani is a very active student among other children in the class. He is also very good at studies. His mother is a kidney failure patient and his father, Kashi is a drunkard. He used to take cheap liquor and always beat his wife Ramulamma.

Meet V Sumath, Her Story Will Leave You With Teary Eyes Children’s mind is utmost sensitive. It is said that if a child is facing situations like constant brawls and fights around, their mind gets the same damage as collateral damage is faced in a war. Such a story of our little angel, V Sumathi. The story of her life doesn’t reveal places and names. Also, sensitive content requires user discretion. V Sumathi joined our Joy Home Orphanage in the year 2014. G. Vaishnavi - Seruds Vaishnavi parents are so poor and they are daily wage labours. Throughout the month, they won’t get work because they are living in a small village in Kurnool district. They hardly getting their livelihood. Stats About Literacy in India: National Education Day 2018 In this Blog: On the occasion of National Education Day, let’s dive our heads into the stats about literacy in India. Let’s understand with a literacy rate so high almost 75%, why many kids still dream of going to school. National Education Day 2018 is just a day ahead and we wanted to share something nice with our readers. We earlier thought of showing the progress of education, which we indeed observed in the past few years. But, why to share something that we all can see? Why not something that our eyes usually misses.

Global Health Issues Of 2019- 2020 & How You Can Support In this blog: Let’s unveil the global health issues of 2019 – 2020, its threats and how everyone can support in eradication by means of charity & donation. Previously, we mentioned how SERUDS as a part of WHO is taking care of reproductive health on priority. This article doesn’t decisively claim the record of cases of the country(s) but definitely gives a shout out to achieve greater health worldwide.

Want To Know the Truth behind Salman Khan Charity Work? Read This Guess you have already heard about “Charity Work by Salman Khan’ or his organization ‘Being Human’. But how much he has donated so far?? Let’s learn in this blog, the list of charity work and contributions done by Bollywood megastar Salman Khan. Salman Khan Charity’s work is always talk of the town.