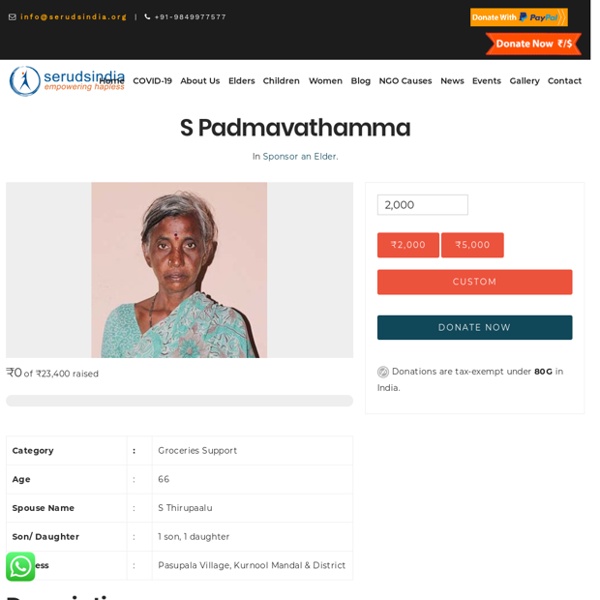 Story: Padmavathaamma has 1 son and 1 daughter. Her son got married and works as a construction worker. He wastes the money by consuming liquor daily. Her husband used to work as a college watchman. He too consumes liquor and wastes money. Her daughter got married.

Testimonials of NGO in India Education & Employment are the two main aspects usually for anyone. But gaining knowledge and taking a bold decision to setup an Non Governmental Organization (NGO) with limited resources, and with a genuine purpose of improving the living standards of the less privileged children by giving them shelter, food, healthy conditions, education. Supporting destitute elderly women by giving them food every day & instilling a hope in them that they too are wanted, struggling women with lot of responsibilities have a avenue to work and earn with dignity through tailoring centres and teaching at creche centres. These are only few of the activities that Mr.Mallikarjuna is carrying out for the last so many years with immense hard work, dedication, perseverance and with a vision to support and uplift the economically & socially deprived people.

8 Year Old Became 3 Year Old Sister’s Mother: Heart-breaking Story In this Blog: We’ll discuss a heart-breaking story about an 8-year-old boy. Situations forced him to become a mother of her 3-year-old. We came across one incident and nothing could stop us from sharing with Y’all. Disclaimer: Names, places etc. are supposed to be kept hidden. Images and names (wherever used) are entirely imaginative. Ever thought about how you’ll live your life without parents? Charity Work by Sachin Tendulkar is Worth Reading In this Blog: Let’s discuss Charity Work by Sachin Tendulkar that made him even more inspiring person. From education to Village adoption, Sachin has done a lot of charity work. Sachin Tendulkar is not only admired for his outstanding performance on the field but also admired for his values as a human being. he contributed a lot back to the society. Here are some of the Charity Work by Sachin Tendulkar: Sachin’s Charity for Free Education Apnalaya is a non-profit organisation, founded in 1973. it works with the most marginalised people living in highly under-served slums of Mumbai.

Kerala Flood Victims Still Not in Relief, Need More Funds at Relief Camps Kerala flood victims are on high priority of govt, and also people across the globe is making enormous donations for the relief camps set near the safe house. But are those donations and charities are enough to take care of Kerala Flood Victims? Or even enough to meet the necessity or needs? There has been a lot of interactions on Social Media suggesting that Kerala flood victims are gaining enough man and material relief but that’s not true.

Celebrities Who Made Biggest Donations to Kerala Relief Fund In this Blog: Let’s discuss a list of celebrities who made the biggest donations to Kerala Relief Fund. The list includes a few known philanthropists, celebrities and even organizations who stood like a rock and contributed a huge amount to Kerala Flood Victims. The total amount has crossed 730 crores and still counting. Everyone’s donation was highly appreciated but people with crores of rupees made a major contribution to the fund. International Literacy Day 2018: Global Literacy Stats & How to Improve it International Literacy Day 2018 has been observed on the 8th of September every year. Ever since we have been seeing various movements and struggles of people all over the globe… striving hard for education.Even in India, govt’s initiatives like ‘Right to Education’ have brought. Some relief to standards of Literate people because we all know that education can lead the world in a better direction.

Award for Excellence in Social Service Goes to Seruds NGO - Seruds What’s this: Happy and honored to announce that the Award for excellence in Social Work proudly goes to the president of Seruds NGO. In the picture, we can see Seruds President Mallikarjuna Gorla receiving an award from chief guests. There’s a saying that good deeds never remains unappreciated. Ganesh Chaturthi Celebrations Can Be Done this Way, God will be even Happier Everywhere Ganesh Chaturthi Celebrations happens with utmost serenity and devotion we spent thousands of rupees in preparing big banners flexis. We spend lots of rupees making Ganesh Idol. We spend the limitless amount in the auction of Ganesh laddu. Disclaimer: We are not against any religion, caste, belief or any race. This article is as per NGO perspective, viewers discretion is recommended. Here we have a few stats of the amount that is being spent in the celebration of Ganesh Chaturthi.

These People Are Richest By Heart - See Viral Pics Of Helping People Some people are so rich by there heart despite being so financially broken that can teach the biggest lessons of humanity for everyone. There are many pics/videos that go viral on the internet when people praise them. People always look up for such impressive work by people, a few months ago a pic of policeman feeding old woman went viral, a few weeks ago Spiderman of Paris was ruling all over the internet. If you follow Pinterest, you might already see a clear selection of such pics in the topic. Here we have some collection of pics and speculated theory about how generous one can be. 1.

What Does Charity Begins at Home Means? We always hear the phrase ‘Charity Begins at Home’ and we take it as a regular proverb or quote. But if we dig a deeper meaning of it, it’s amusing and breath-taking. So, hold on till the end of the blog to understand what does charity begins at home actually means. Before that, we have a riddle, “I am an animal but not alive, I give my everything, almost broke myself to give you hope & happiness, I am always your backup, What am I?” (Find the answer in the bottom). History and Origin of the Phrase ‘Charity Begins at home’ Charity Work By Cristiano Ronaldo Will Make You His Fan Charity work by Cristiano Ronaldo is more impactful than his strike. Not only the most loved football player has a golden boot, but even his heart also has the Midas touch of gold. In this Blog: Let’s learn about the Christiano Ronaldo’s Charity Deeds which will make you his fan for sure. If you follow social media, we can see a huge number of posts that talks about his social work and we are quite sure that you might have encountered at least one for sure. We recently came across this post about Ronaldo’s Charity and decided that we shall publish an article showcasing his heart-melting charitable deeds.