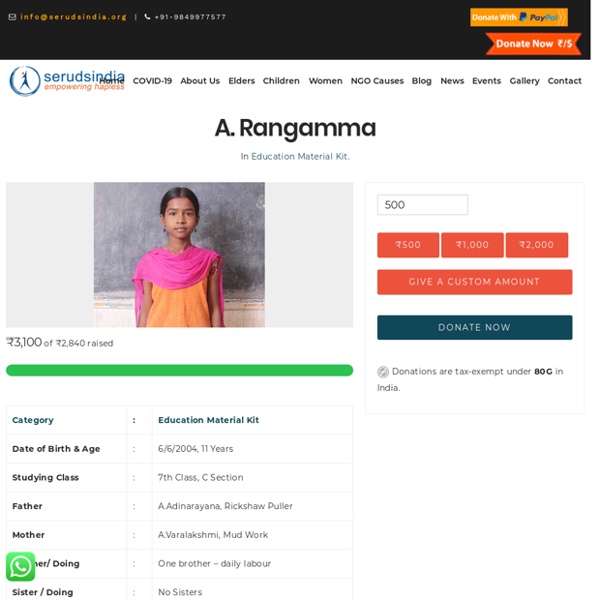 V. Sreelakshmi - Seruds Sreelakshmi parents have four girl children. Both were daily wage labourers in the agriculture fields. But her father whatever he earns he always spends on cheap liquor. Lakshmidevi also works and gets meagre income. He is having extra marital relations with other women in the village. He always beat the wife.

How Ngo Donations In India Are Used? Check The Transparency Here In this blog, let’s understand the Ngo Donations in India are genuinely forwarded or what sort of transparency can be expected when someone makes a charity. We all have seen hundreds of crowdfunding sites and thousands (or I must say lakhs) of NGOs in India. Out of which it was proven by sources that most of them are a fraud. World’s Biggest Charity - 6 Year Old Donated his Piggy Bank World’s biggest charity is expected to have a huge amount, wealth, and assets involved right? Not really, sometimes, little gestures by any person can be an inspiring story enough to share and motivate. We encountered one such incident recently that melted our heart, we observed the world’s biggest charity. Disclaimer: In order to maintain confidentiality, the details such as the name of the boy. We had a visitor a few days ago, a schoolboy.

From Selfish to Selfless, This Donor Has The Best Charity Story - Seruds In this blog: Let’s talk about one of our Donors who have probably the best Charity story of how he changed himself from a selfish person to selfless. People shape their understanding, perspectives and beliefs based on the type of experiences they have. Just because a person is harsh with words or selfish with his actions, can be judged but can’t be understood.

The Power Of You: You Can Change Lives - Seruds The ‘Power of you’ is a narrative blog written for self-realization. We always talk about the change we can make but lesser that we know about our power that can change the scenario of everything around. Is that me? Will I change the life of others? Yes. Best of Mother Teresa Quotes On Charity In this blog: Let’s discuss some of Mother Teresa Quotes about charity. We’ve jotted this great collection of her best sayings on humanity and service to humanity. Mother Teresa is one of the greatest human beings the world has ever seen. Keeping all the awards and achievements that she got for her Philanthropic work, her perspective towards the service to humanity was way beyond that.

Charity Work By Cristiano Ronaldo Will Make You His Fan Charity work by Cristiano Ronaldo is more impactful than his strike. Not only the most loved football player has a golden boot, but even his heart also has the Midas touch of gold. In this Blog: Let’s learn about the Christiano Ronaldo’s Charity Deeds which will make you his fan for sure. If you follow social media, we can see a huge number of posts that talks about his social work and we are quite sure that you might have encountered at least one for sure. Donate to Poor Needy People Story: Lakshmamma currently deserted and living in a small hut. She has one son and two daughters. One of her sons is working in hair cutting saloon. Whatever he earns is not sufficient for the home needs. Two daughters got married and living separately. Her husband died after suffering from Jaundice.

What Does Charity Begins at Home Means? We always hear the phrase ‘Charity Begins at Home’ and we take it as a regular proverb or quote. But if we dig a deeper meaning of it, it’s amusing and breath-taking. So, hold on till the end of the blog to understand what does charity begins at home actually means. Before that, we have a riddle, “I am an animal but not alive, I give my everything, almost broke myself to give you hope & happiness, I am always your backup, What am I?” (Find the answer in the bottom). Ratan Tata Charity Work Makes Him The Nicest Person of India Heard about Ratan Tata Charity Work about Coronavirus Relief? 500 crores of donation is the largest donation. In this article, read his other charitable works. As we all know, Ratan Tata, India’s one of biggest industrialists who’s also the chairman of TATA Group, worth 5 billion USD is also a great philanthropist who’s donated billions. In a previous article, we’ve mentioned a list of Indian celebs who’ve donated huge sums for Coronavirus relief. Read here.