Enlightening and Education - Donate to Orphans and Poor Elders 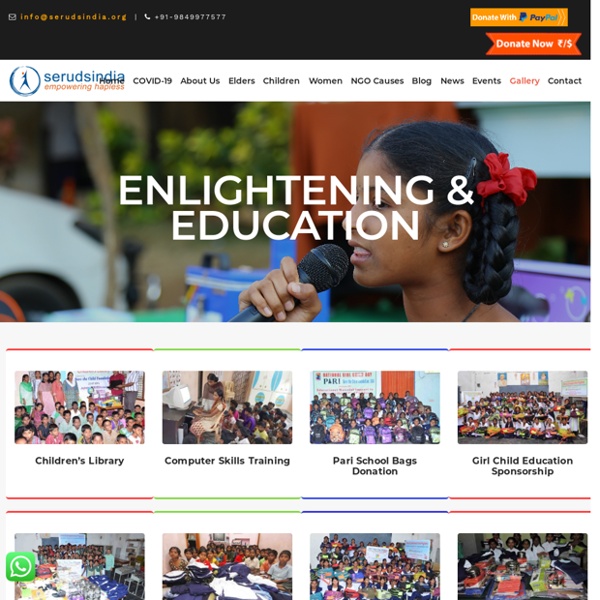 Donate to Poor Needy People Story: Lakshmamma currently deserted and living in a small hut. She has one son and two daughters. One of her sons is working in hair cutting saloon. Donate to Save the Environment “He that plants trees loves others besides himself.” Since 2003 we are mainly focusing on environment protection and by planting 21500 trees. A strong effort is happening in different urban, sub-urban areas and villages by plantation to reduce the dangerous threat of global warming, which would be helpful to reduce air pollution to make healthier environment. According to the report of UNO, around 9 hectares forest has been acquired in every minute between 1990- 2005 around the world and trees are obtained in every year in 5 million hectare areas. This is a signal of a major threat for all nations.

Ratan Tata Charity Work Makes Him The Nicest Person of India Heard about Ratan Tata Charity Work about Coronavirus Relief? 500 crores of donation is the largest donation. In this article, read his other charitable works. D.Madhavi - Seruds Madhavi parents were labourers. Morning to evening in the sun they should break stones. It was so difficult to work. But they get a meagre income and its not at all sufficient for the family needs. Best of Mother Teresa Quotes On Charity In this blog: Let’s discuss some of Mother Teresa Quotes about charity. We’ve jotted this great collection of her best sayings on humanity and service to humanity. Mother Teresa is one of the greatest human beings the world has ever seen. Keeping all the awards and achievements that she got for her Philanthropic work, her perspective towards the service to humanity was way beyond that. Even today, the younger generation will call out only one name when it comes to the greatest personalities in social service, it is Mother Teresa.

G. Anitha - Seruds Anitha parents were daily wage labourers. Father addicted to bad habits and not giving any money for the sake of family. So Anitha mother is always suffrering money for livelihood. Instead of sharing the family burdons he become angry and began to quarrel always with Anitha mother. Often it is happening in the house . From Selfish to Selfless, This Donor Has The Best Charity Story - Seruds In this blog: Let’s talk about one of our Donors who have probably the best Charity story of how he changed himself from a selfish person to selfless. People shape their understanding, perspectives and beliefs based on the type of experiences they have. Just because a person is harsh with words or selfish with his actions, can be judged but can’t be understood. Trending Article: SERUDS President Got Award For His Charity Deeds

G. Vaishnavi - Seruds Vaishnavi parents are so poor and they are daily wage labours. Throughout the month, they won’t get work because they are living in a small village in Kurnool district. They hardly getting their livelihood. Suddenly Revathi’s mother well ill. Her father feels it is so burdened to him to get medicines for her. But he should so it became so difficult to feed the children regularly. How Ngo Donations In India Are Used? Check The Transparency Here In this blog, let’s understand the Ngo Donations in India are genuinely forwarded or what sort of transparency can be expected when someone makes a charity. We all have seen hundreds of crowdfunding sites and thousands (or I must say lakhs) of NGOs in India. Out of which it was proven by sources that most of them are a fraud. Only a couple of NGOs like Goonj, Seruds and other good social charitable organizations are trustworthy to donate.

M. MOUNIKA - Seruds Mounika parents are agricultural labourers when mounika was so young her father left family went away with another lady & got married for his enjoyment. So her father was not at all bothering about mounika and her mother. As a single young lady she can’t live bravely in the world. Almost she decided to kill herself along with her daughter.