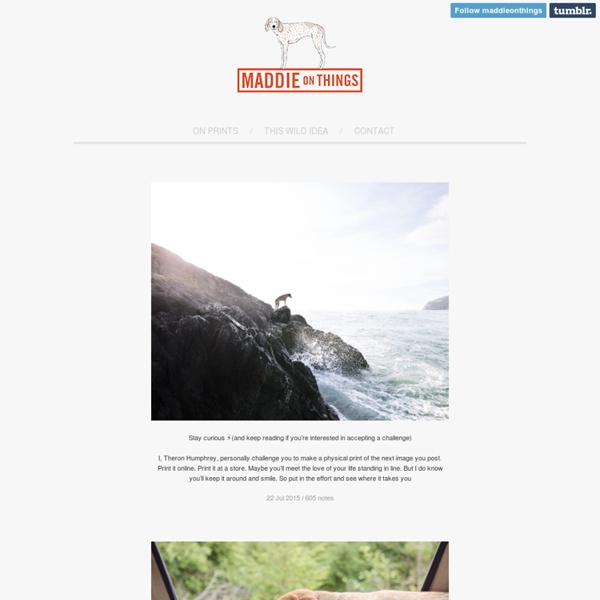 Pencil vs Camera: Incredible images mixing photography and pencil drawings must be seen many, many times to be believed Visual artist's dream-like pieces are intended to help people "forget their daily troubles" Ben Heine Innovative artwork that blends photography, pencil drawings, “imagination and reality” is wowing art aficionados both online and offline. Remarkably, Ben Heine was inspired to create the distinctive pieces - known by the collective title of ‘Pencil vs Camera’ - while writing a letter. Currently exhibiting his work at The Art Movement Gallery in London until June 17, Ben is quoted as explaining: “Reading my letter before putting it in the envelope, I saw in transparency the television behind the paper.

all images (c) mehmet nevzat erdogan Next ASKWebsiteArchive see the complete story here add me on facebook 17 notes | 2 months ago If the Thunder Don't Get You, The Lightning Will Thunder, lightning and strong winds greeted the National Zoo’s two female Red Panda cubs when they were born June 17, and that stormy night has now determined their names. One cub, Pili, received her name today after voting closed on NBC Washington’s website. Pili, which means “clap of thunder” in Chinese, was the winner among four names—all storm-related—with 30 percent of the vote. Bienvenue DTC - Où ? Dans Ton Chat (BashFR) ZooBorns The San Diego Zoo’s Mandrill group welcomed a new addition to their ranks last week. Female, Kesi, gave birth to a baby boy, and he is the first Mandrill born at the Zoo in over 14 years. Animal care staff had been watching for Kesi to give birth; but the night before, there were still no signs she was in labor. The next day, staff members said they were surprised to see Kesi walk out of her bedroom holding her new baby. “It’s like every day we would come in, in the morning, and think like there might be a baby – we don’t know,” Jenny Baublit, senior primate keeper at the San Diego Zoo. “To actually see it was pretty incredible.

P.A Vote for this very short, very cool short of a friend of mine. (Source: vimeo.com) Candid pics. Festa Major de Gracia Beaufland How to make it in America Part II. The Top 100 Photography Blogs - Photography Colleges Learning the art of photography is exciting, especially because so many resources are available to beginner photographers online and off. Some of the best of these resources are blogs, and they highlight gear, techniques, inspiration, and more that can help you learn to be a better photographer. Read on to discover 100 of the best photography blogs out there. General For general interest photography, be sure to check out these blogs.

Julianne Popa spring summer autumn winter Billionaire Boys Club Blog Our apologies for not updating the blog; we’ve been caught up with the latest BBCICECREAM releases. We know this is late, but better late than never! SpongeBob SquarePants threw Pharrell a 41st Birthday celebration at Cipriani’s on Wall Street. The space was transformed into Bikini Bottom and featured special guests such as SpongeBob, Patrick, Squidward, and Celebrity friends. Train of Thought: On the ‘Subway’ Photographs by Bruce Davidson In the spring of 1980, I began to photograph the New York subway system. Before beginning this project, I was devoting most of my time to commissioned assignments and to writing and producing a feature film based on Isaac Bashevis Singer’s novel, Enemies, A Love Story. When the final option expired on the film, I felt the need to return to my still photography—to my roots. I began to photograph the traffic islands that line Broadway. These oases of grass, trees, and earth surrounded by heavy city traffic have always interested me. I found myself photographing the lonely widows, vagrant winos, and solemn old men who line the benches on these concrete islands of Manhattan’s Upper West Side.

Japan Opens Up Cat Brothels Japanese people are crazy. No offense. They are. Photoshop Shortcuts ? The Fun Way In this post I’m going to focus on several Photoshop shortcuts that I tend to use more often than others. Sure I could sit here and spell out every single shortcut available, but why reinvent the wheel? Here is a list of 10 of my favorite and most used Photoshop shortcuts delivered to you via Mr. Stickman. Zoom with scroll How To Give Your Photos a Dark Processed Lomo Effect This post was originally published in 2010 The tips and techniques explained may be outdated. Follow this step by step post processing guide to give your photos a dark lomo style effect with high contrast, blue tones and vignette burns. The effect is based on the popular lomographic technique and is similar to the processing effect used in many fashion shots and advertisement designs. Overall this effect does a great job of adding impact to a plain photography with cool colour casts and unusual saturation. View full size photo effect