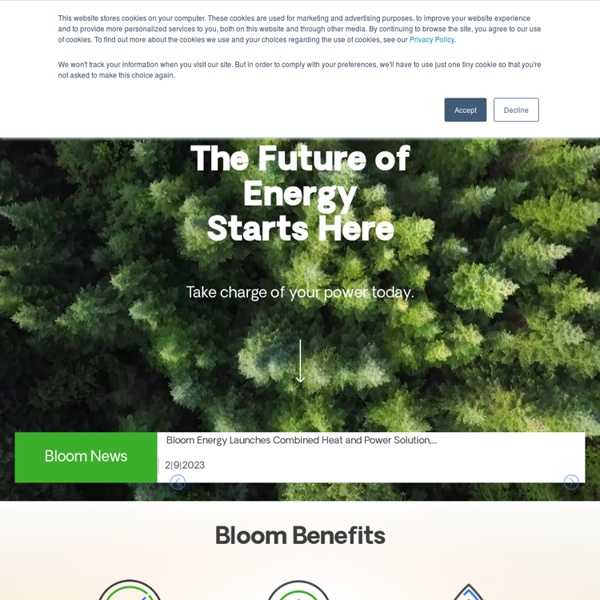 Exclusif: Le bénéfice de Bloom Energy - Le term sheet: les offres de Fortune Fiche blogTerm FORTUNE -- For years, the knock on fuel cell maker Bloom Energy Corp. has been that its boxes cost more to make than they cost to buy. Not exactly the sort of dynamic that would help Bloom make it up on volume. But perhaps things are finally about to change, after 10 years and nearly $1 billion in venture capital funding. Fortune recently obtained confidential documents sent by Bloom to its "significant investors," detailing third quarter earnings and the company's broader financial position. We also have managed to learn some broader context around the numbers, and have received what is believed to be the company's first on-the-record statement about its top-line projections for 2013 (all prior requests for information had gone unanswered). For the uninitiated, Bloom was founded by K.R.

Thermal Electric From PESWiki This page presents a directory of thermal electric environmental heat engine designs and theories, which in some cases appear to violate the second law of thermodynamics for the purpose of practical energy generation. Index of systems that utilize temperature gradients to generate usable energy or electricity (known as thermal electricity). There are many large scale thermal to electric systems operating today, many with low delta-T's (temperature change) like the Ener-G-Rotor system that takes the waste heat from steam turbines and produces 50 KW. -- (NEC Advisor, Jim Dunn; Sept. 6, 2007) Such devices fall into one of two categories: Features Was the Hype Around Bloom Energy Two Years Ago Justified? About two years ago Bloom Energy revealed its top secret “Bloom Box” fuel cell system and immediately created an incredible buzz. It was amazing to see how much hype buzzed around what the company described as “a new class of distributed power generator, producing clean, reliable, affordable electricity at the customer site.” For a while, it seemed that there was nothing more exciting than Bloom’s fuel cells that promised to change the world someday.

Residential Contact Request Thank you for your interest in Bloom Energy! Unfortunately, the current power output of a Bloom Box is far more than the individual home needs. Today's product is best suited for large commercial and industrial scale applications. The technology is evolving every day, and our ultimate goal is to be able to provide clean, reliable, affordable energy to every home, however this will take time, and several more years of development.

AT&T to Install More Bloom Boxes AT&T has agreed to purchase an additional 9.6 megawatts of Bloom Energy Servers (shown above) to provide energy for its facilities and data centers (Image: Bloom Energy) Bloom Energy continues to gain traction for its fuel cell technology with major data center operators. AT&T said today that it will purchase an additional 9.6 megawatts of fuel cell capacity, which will make it Bloom Energy’s largest non-utility customer. In July 2011, AT&T announced plans to deploy 7.5 megawatts of ”Bloom Boxes” at 11 AT&T sites in California, including data centers. Products J.I.M.S. Motor Information The J.I.M.S. engine (shown above), is the most revolutionary engine to be released to the public in recent years. Since the current means of power is the combustion engine, we will try to describe the differences comparing it to the V-8 engine. The V-8 engine generates 4 cylinder “firings” per revolution.

Energy Server - Qu'est-ce que c'est? Built with our patented solid oxide fuel cell technology, Bloom's Energy Server® is a new class of distributed power generator, producing clean, reliable, affordable electricity at the customer site. Fuel cells are devices that convert fuel into electricity through a clean electro-chemical process rather than dirty combustion. They are like batteries except that they always run. Our particular type of fuel cell technology is different than legacy "hydrogen" fuel cells in three main ways: Low cost materials – our cells use a common sand-like powder instead of precious metals like platinum or corrosive materials like acids.

Bloom Box - Les 50 meilleures inventions de 2010 - Heure Inventors have tried to use hydrogen fuel cells as a cleaner way to create commercial electricity, but they've always been limited by the cost. That's beginning to change, however, thanks to a California start-up called Bloom Energy. Its Bloom Box — about half the size of a shipping container — generates electricity using solid oxide fuel cells, which provide juice by oxidizing a fuel source.

Bloom Box fuel cell officially launched True to its word the formerly secretive Bloom Energy launched its Bloom “Box” (hereafter known as the Bloom Energy Server), today with an event at eBay’s California HQ attended by Governor Schwarzenegger and Bloom Energy board member Colin Powell. Although the launch didn’t see any great revelations to add to the 60 Minutes coverage of the versatile fuel cell earlier in the week, the company did provide a few more concrete specifications for the Bloom “Box”, as well as some of the corporate household names that are already customers. At the launch Bloom Energy founder, K.R. Sridhar, stressed some of the benefits of the technology. It is cheap - in comparison to other types of fuel cells anyway. Instead of expensive precious metals the Bloom Box consists of thousands of flat, solid ceramic squares made from a common sand-like "powder."

Bloom Energy Server - Wikipedia, l'encyclopédie libre The Bloom Energy Server (the Bloom Box) is a solid oxide fuel cell (SOFC) made by Bloom Energy, of Sunnyvale, California, that can use a wide variety of inputs (including liquid or gaseous hydrocarbons[1] produced from biological sources) to generate electricity on the site where it will be used.[2][3] It can withstand temperatures of up to 1,800 °F (980 °C), that would cause many other fuel cells to break down or require maintenance.[4] According to the company, a single cell (one 100 mm × 100 mm metal alloy plate between two ceramic layers) generates 25 watts.[5] Bloom stated that two hundred servers have been deployed in California for corporations including eBay, Google, Yahoo, and Wal-Mart.[6] Technology[edit] To save money, the Bloom Energy Server uses inexpensive metal alloy plates for electric conductance between the two ceramic fast ion conductor plates.

Bloom Box: Qu'est-ce que c'est et comment ça marche? It’s being hailed as the Holy Grail of clean energy: a refrigerator-sized personal power plant that produces energy cheaply and cleanly and may one day replace the traditional power grid. Its inventor wants to put one in every home by 2020. Skip to next paragraph Subscribe Today to the Monitor Click Here for your FREE 30 DAYS ofThe Christian Science MonitorWeekly Digital Edition Bloom Box is the creation of Bloom Energy, a Sunnyvale, California-based company that is promising to revolutionize energy with its “power plant in a box.” La Bloom Box et autres piles à combustible à hydrogène There is a lot of hype right now about the “Bloom Box.” Google installed one, Adobe installed one, and Bloom Energy has an active sales force hitting up the Fortune 500. So what is a Bloom Box and what does it mean for the future of the energy world?